Loss of reflectivity in the Arctic doubles estimate of climate models 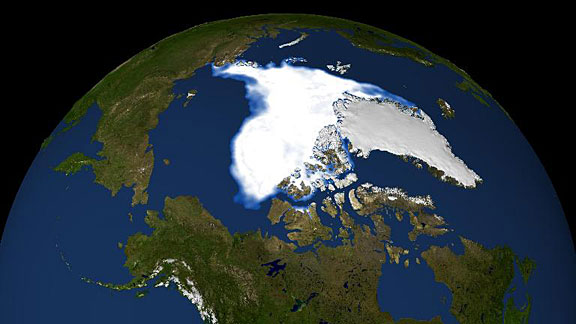 A new analysis of the Northern Hemisphere’s “albedo feedback” over a 30-year period concludes that the region’s loss of reflectivity due to snow and sea ice decline is more than double what state-of-the-art climate models estimate.

The findings are important, researchers say, because they suggest that Arctic warming amplified by the loss of reflectivity could be even more significant than previously thought.

A new analysis of the Northern Hemisphere’s “albedo feedback” over a 30-year period concludes that the region’s loss of reflectivity due to snow and sea ice decline is more than double what state-of-the-art climate models estimate.

The findings are important, researchers say, because they suggest that Arctic warming amplified by the loss of reflectivity could be even more significant than previously thought.

The study was published online this week in Nature Geoscience. It was funded primarily by the National Science Foundation, with data also culled from projects funded by NASA, the Department of Energy and others.

“The cryosphere isn’t cooling the Earth as much as it did 30 years ago, and climate model simulations do not reproduce this recent effect,” said Karen Shell, an Oregon State University atmospheric scientist and one of the authors of the study. “Though we don’t necessarily attribute this to global warming, it is interesting to note that none of the climate models used for the 2007 International Panel on Climate Change report showed a decrease of this magnitude.”

The cryosphere is the collective portion of the Earth’s surface where water is in solid form and includes sea ice, snow, lake and river ice, glaciers, ice sheets and frozen ground. Most of these frozen areas are highly reflective, and “bounce” sunlight back into the atmosphere, keeping the Earth cooler than it would be without the cryosphere.

But as temperatures warm, ice and snow melts and reflectivity decreases, noted Shell, an assistant professor in OSU’s College of Oceanic and Atmospheric Sciences.

“Instead of being reflected back into the atmosphere, the energy of the sun is absorbed by the Earth, which amplifies the warming,” Shell said. “Scientists have known for some time that there is this amplification effect, but almost all of the climate models we examined underestimated the impact – and they contained a pretty broad range of scenarios.”

As part of the study, Shell, lead author Mark Flanner of the University of Michigan, and their colleagues compared Northern Hemisphere cryosphere changes between 1979 and 2008 in 18 different climate models to changes in actual snow, ice and reflectivity measurements of the same period. They determined that mean radiative forcing – or the amount of energy reflected into the atmosphere – ranged from 4.6 to 2.2 watts per meter squared.

During the 30-year study period, cryosphere cooling declined by 0.45 watts per meter squared. The authors attribute that decline equally to loss of snow and sea ice.

“Some of the decline may be natural climate variability,” Shell said. “Thirty years isn’t a long enough time period to attribute this entirely to ‘forcing,’ or anthropogenic influence. But the loss of cooling is significant. The rate of energy being absorbed by the Earth through cryosphere decline – instead of being reflected back to the atmosphere – is almost 30 percent of the rate of extra energy absorption due to carbon dioxide increase between pre-industrial values and today.”

The “albedo” or reflectivity process is simple, scientists say, but difficult to measure on a broad scale. The reflectivity of ice and snow is obviously much greater than that of darker, unfrozen ground, or open sea water. But researchers also have discovered that variations in the snow and ice result in different albedo impacts.

For example, pools of melted water on top of sea ice can have significantly less reflectivity, which in essence may speed up the warming and possibly melting of that sea ice.

“While the current group of models underestimates these Northern Hemisphere cryosphere changes, new models will be released this year that will have better representations of snow and ice,” Shell said. “This study will help climate modelers improve the new generation of models to better predict the rate of cryosphere and albedo decline in the future.”