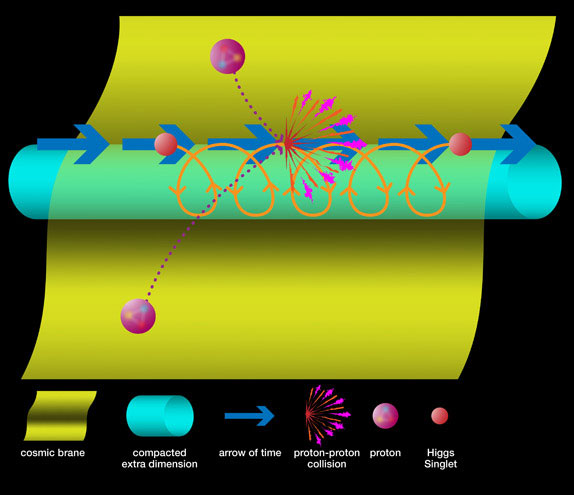 Illustration of singlet time travel theory. When a pair of protons collide in the Large Hadron Collider, the resultant explosion may create a special type of particle, called a Higgs singlet, that is capable of traveling forward and back in time. It would do so by leaving familiar three-dimensional space to travel in an extra dimension. (Jenni Ohnstad / Vanderbilt)

Illustration of singlet time travel theory. When a pair of protons collide in the Large Hadron Collider, the resultant explosion may create a special type of particle, called a Higgs singlet, that is capable of traveling forward and back in time. It would do so by leaving familiar three-dimensional space to travel in an extra dimension. (Jenni Ohnstad / Vanderbilt)

If the latest theory of Tom Weiler and Chui Man Ho is right, the Large Hadron Collider – the world’s largest atom smasher that started regular operation last year – could be the first machine capable of causing matter to travel backwards in time.

“Our theory is a long shot,” admitted Weiler, who is a physics professor at Vanderbilt University, “but it doesn’t violate any laws of physics or experimental constraints.”

One of the major goals of the collider is to find the elusive Higgs boson: the particle that physicists invoke to explain why particles like protons, neutrons and electrons have mass. If the collider succeeds in producing the Higgs boson, some scientists predict that it will create a second particle, called the Higgs singlet, at the same time.

According to Weiler and Ho’s theory, these singlets should have the ability to jump into an extra, fifth dimension where they can move either forward or backward in time and reappear in the future or past. “One of the attractive things about this approach to time travel is that it avoids all the big paradoxes,” Weiler said. “Because time travel is limited to these special particles, it is not possible for a man to travel back in time and murder one of his parents before he himself is born, for example. However, if scientists could control the production of Higgs singlets, they might be able to send messages to the past or future.” Unsticking the “brane”

The test of the researchers’ theory will be whether the physicists monitoring the collider begin seeing Higgs singlet particles and their decay products spontaneously appearing. If they do, Weiler and Ho believe that they will have been produced by particles that travel back in time to appear before the collisions that produced them.

Weiler and Ho’s theory is based on M-theory, a “theory of everything.” A small cadre of theoretical physicists have developed M-theory to the point that it can accommodate the properties of all the known subatomic particles and forces, including gravity, but it requires 10 or 11 dimensions instead of our familiar four. This has led to the suggestion that our universe may be like a four-dimensional membrane or “brane” floating in a multi-dimensional space-time called the “bulk.”

According to this view, the basic building blocks of our universe are permanently stuck to the brane and so cannot travel in other dimensions. There are some exceptions, however. Some argue that gravity, for example, is weaker than other fundamental forces because it diffuses into other dimensions. Another possible exception is the proposed Higgs singlet, which responds to gravity but not to any of the other basic forces.

Weiler began looking at time travel six years ago to explain anomalies that had been observed in several experiments with neutrinos. Neutrinos are nicknamed ghost particles because they react so rarely with ordinary matter: Trillions of neutrinos hit our bodies every second, yet we don’t notice them because they zip through without affecting us.

Weiler and colleagues Heinrich Paes and Sandip Pakvasa at the University of Hawaii came up with an explanation of the anomalies based on the existence of a hypothetical particle called the sterile neutrino. In theory, sterile neutrinos are even less detectable than regular neutrinos because they interact only with gravitational force. As a result, sterile neutrinos are another particle that is not attached to the brane and so should be capable of traveling through extra dimensions.

Weiler, Paes and Pakvasa proposed that sterile neutrinos travel faster than light by taking shortcuts through extra dimensions. According to Einstein’s general theory of relativity, there are certain conditions where traveling faster than the speed of light is equivalent to traveling backward in time. This led the physicists into the speculative realm of time travel. Ideas impact science fiction

In 2007, the researchers, along with Vanderbilt graduate fellow James Dent, posted a paper titled “Neutrino time travel” that generated a considerable amount of buzz.

Their ideas found their way into two science fiction novels. Final Theory by Mark Alpert, which was described in the New York Times as a “physics-based version of The Da Vinci Code,” is based on the researchers’ idea of neutrinos taking shortcuts in extra dimensions. Joe Haldeman’s novel The Accidental Time Machine is about a time-traveling MIT graduate student and includes an author’s note that describes the novel’s relationship to the type of time travel described by Dent, Paes, Pakvasa and Weiler.

Ho is a graduate fellow working with Weiler. Their theory is described in a paper posted March 7 on the research website arXiv.org.