An object from another star system that made a brief appearance in our skies guised as an asteroid turns out to be a tiny interstellar comet.

‘Oumuamua, a name that reflects the Hawaiian meaning for ‘a messenger from afar, arriving first’, was discovered by astronomers working with the Pan-STARRS survey in Hawaii in October last year as the object came close to Earth’s orbit. Follow-up observations by ESA’s Optical Ground Station telescope in Tenerife, Canary Islands, and other telescopes around the world helped determine its trajectory.

The astronomers had detected ‘Oumuamua about a month after its closest approach to the Sun, which took it on a highly inclined path within the orbit of Mercury. Travelling at a speed of about 114 000 km/h as of 1 June 2018, ‘Oumuamua is fast enough to escape the Sun’s gravitational pull and will eventually break free of our Solar System.

But the story has another surprising twist.

Following the initial observations, a team of astronomers led by ESA’s Marco Micheli continued to make high precision measurements of the object and its position using ground-based facilities and the NASA/ESA Hubble Space Telescope. The final images were taken with Hubble in January before the object became too faint as it sped away on its outbound orbit.

Contrary to their expectations, the team found that the object was slightly deviating from the trajectory it would be following if it were only influenced by the gravity of the Sun and the planets.

“Unexpectedly, we found that ‘Oumuamua was not slowing down as fast as it should have under gravitational forces alone,” says Marco, lead author of the paper reporting the team’s findings published today in the journal Nature.

Rigorous analysis ruled out a range of ideas such as radiation pressure or thermal effects from the Sun or the interaction of our Sun’s solar wind influencing its motion. A collision with another body knocking it off course was also discounted, and it was also not considered likely to be two separate bodies loosely bound by gravity. 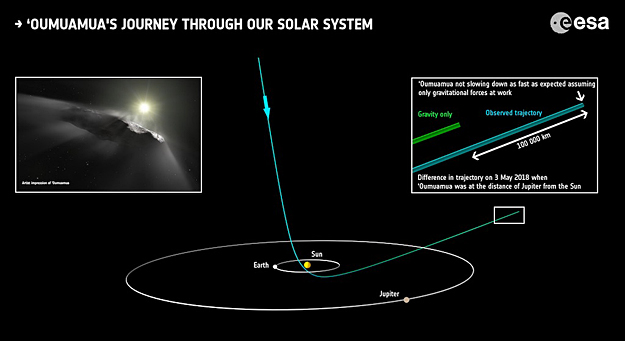 ‘Oumuamua’s journey through our Solar System

“We tested many possible alternatives and the most plausible one is that ‘Oumuamua must be a comet, and that gasses emanating from its surface were causing the tiny variations in its trajectory,” says team member Davide Farnocchia of NASA’s Jet Propulsion Laboratory.

Yet the team still hadn’t detected any dusty material or chemical signatures that would typically characterise a comet, even in the deepest images from Hubble. They arrived at the conclusion that ‘Oumuamua must have been releasing only a very small amount of dust, or perhaps rather more pure gas without much dust, to explain this lack of detection.

In any case, `Oumuamua is estimated to be very small, no more than a few hundred metres across.

Comets contain ices that turn directly from solid to gas when warmed by the Sun, dragging out the dust from the surface to create a fuzzy ‘atmosphere’ and sometimes a tail. The release of gas pressure can have the effect of perturbing the comet path compared with the expected one if only gravitational forces were at play.

Yet the team still hadn’t detected any dusty material or chemical signatures that would typically characterise a comet, even in the deepest images from Hubble. They arrived at the conclusion that ‘Oumuamua must have been releasing only a very small amount of dust, or perhaps rather more pure gas without much dust, to explain this lack of detection.

In any case, `Oumuamua is estimated to be very small, no more than a few hundred metres across.

“It was extremely surprising that `Oumuamua first appeared as an asteroid, given that we expect interstellar comets should be far more abundant, so we have at least solved that particular puzzle,” says Olivier Hainaut of the European Southern Observatory. “It is still a tiny and weird object, but our results certainly lean towards it being a comet and not an asteroid after all.”

“There are many unknowns about this object, but then it does come from another Solar System, of which we know nothing about,” adds Marco.

“Interstellar visitors like these are scientifically fascinating, but extremely rare,” says Detlef Koschny, responsible for Near-Earth Object activities under ESA’s Space Situational Awareness programme. “Near-Earth objects originating from within our Solar System are much more common and because these could pose an impact risk, we are working to improve our ability to scan the sky every night with telescopes such as our Optical Ground Station that contributed to this fascinating discovery.”