Astronomers using NASA’s Hubble Space Telescope have completed the largest and most sensitive visible-light imaging survey of dusty debris disks around other stars.
These dusty disks, likely created by collisions between leftover objects from planet formation, were imaged around stars as young as 10 million years old and as mature as more than 1 billion years old.

“It’s like looking back in time to see the kinds of destructive events that once routinely happened in our solar system after the planets formed,” said survey leader Glenn Schneider of the University of Arizona’s Steward Observatory. The survey’s results appeared in the Oct. 1, 2014, issue of The Astronomical Journal.

Once thought to be simply pancake-like structures, the unexpected diversity and complexity of these dusty debris structures strongly suggest they are being gravitationally affected by unseen planets orbiting the star. Alternatively, these effects could result from the stars’ passing through interstellar space.

The researchers discovered that no two “disks” of material surrounding stars look the same. “We find that the systems are not simply flat with uniform surfaces,” Schneider said. “These are actually pretty complicated three-dimensional debris systems, often with embedded smaller structures. Some of the substructures could be signposts of unseen planets.” The astronomers used Hubble’s Space Telescope Imaging Spectrograph to study 10 previously discovered circumstellar debris systems, plus comparatively, MP Mus, a mature protoplanetary disk of age comparable to the youngest of the debris disks.

Irregularities observed in one ring-like system in particular, around a star called HD 181327, resemble the ejection of a huge spray of debris into the outer part of the system from the recent collision of two bodies. 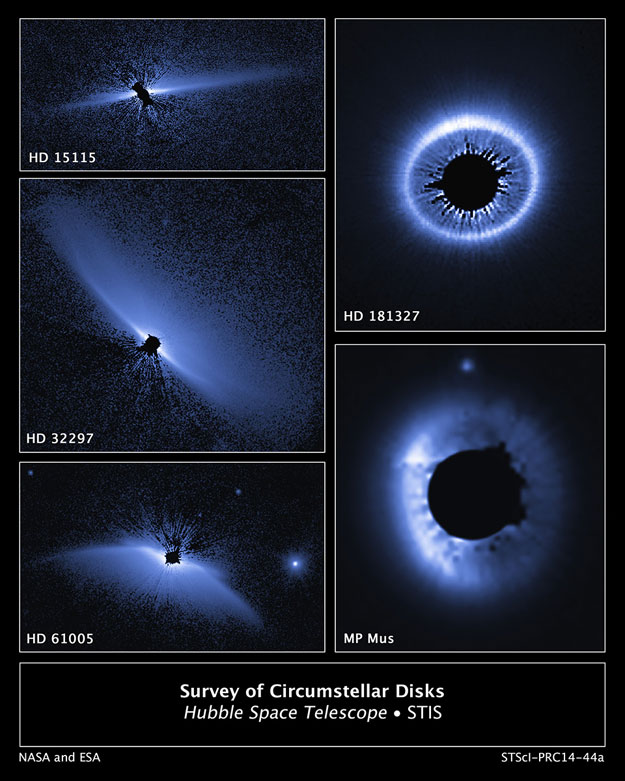 “This spray of material is fairly distant from its host star — roughly twice the distance that Pluto is from the Sun,” said co-investigator Christopher Stark of NASA’s Goddard Space Flight Center, Greenbelt, Maryland. “Catastrophically destroying an object that massive at such a large distance is difficult to explain, and it should be very rare. If we are in fact seeing the recent aftermath of a massive collision, the unseen planetary system may be quite chaotic.”

Another interpretation for the irregularities is that the disk has been mysteriously warped by the star’s passage through interstellar space, directly interacting with unseen interstellar material. “Either way, the answer is exciting,” Schneider said. “Our team is currently analyzing follow-up observations that will help reveal the true cause of the irregularity.”

Over the past few years astronomers have found an incredible diversity in the architecture of exoplanetary systems — planets are arranged in orbits that are markedly different than found in our solar system. “We are now seeing a similar diversity in the architecture of accompanying debris systems,” Schneider said. “How are the planets affecting the disks, and how are the disks affecting the planets? There is some sort of interdependence between a planet and the accompanying debris that might affect the evolution of these exoplanetary debris systems.”

From this small sample, the most important message to take away is one of diversity, Schneider said. He added that astronomers really need to understand the internal and external influences on these systems, such as stellar winds and interactions with clouds of interstellar material, and how they are influenced by the mass and age of the parent star, and the abundance of heavier elements needed to build planets. Though astronomers have found nearly 4,000 exoplanet candidates since 1995, mostly by indirect detection methods, only about two dozen light-scattering, circumstellar debris systems have been imaged over that same time period. That’s because the disks are typically 100,000 times fainter than, and often very close to, their bright parent stars. The majority have been seen because of Hubble’s ability to perform high-contrast imaging, in which the overwhelming light from the star is blocked to reveal the faint disk that surrounds the star.

The new imaging survey also yields insight into how our solar system formed and evolved 4.6 billion years ago. In particular, the suspected planet collision seen in the disk around HD 181327 may be similar to how the Earth-Moon system formed, as well as the Pluto-Charon system over 4 billion years ago. In those cases, collisions between planet-sized bodies cast debris that then coalesced into a companion moon.