Extrasolar Asteroid Has Been Orbiting The Sun For 4.5 Billion Years

An object is revolving around the sun in the vicinity of Jupiter but in the opposite direction from most other celestial bodies, according to a study featuring a Brazilian scientist as co-author.
The Solar System is much vaster and more complex than is usually assumed. The Sun’s gravitational pull on the gravitational fields of the nearest stars is estimated to extend for approximately two light-years (125 astronomical units), meaning the light emitted by the Sun takes approximately two years to reach the outer edge of the Solar System.

This enormous gravitational niche is home to millions of objects, from planets and moons to comets, asteroids and meteoroids. One object differs from all the rest, like an “odd man out”, as it were: asteroid (514107) 2015 BZ509.

The difference is its retrograde orbit: this asteroid revolves around the Sun in the opposite direction to the planets and other celestial bodies. This retrograde orbit and its stability since the Solar System began are considered strong evidence that it is of extrasolar origin and was captured by Jupiter’s gravitational field toward the end of the era in which the planets were formed. According to an article published in Monthly Notices of the Royal Astronomical Society-Letters, a study based on robust computer simulation has now corroborated this hypothesis.

The article is by Maria Helena Moreira Morais, a professor at São Paulo State University’s Institute of Geosciences & Exact Sciences (IGCE-UNESP), with co-author Fathi Namouni, a researcher at the Côte d’Azur Observatory in France. Morais’s participation in the study was supported by the São Paulo Research Foundation – FAPESP via the project “Topics of orbital dynamics and machine learning tools applied to planetary systems data”.

“We’d already constructed a theory to explain the movement of this asteroid. In 2017, we published an article on it in Nature,” Morais said. “In order to try to understand the origin of the object, we later performed large-scale simulations, which resulted in a new article that’s coming out now in Monthly Notices of the Royal Astronomical Society: Letters.”

Large-scale simulation is needed for the following two reasons: first, the margin of error in astronomical observations relating to the orbits of celestial bodies, and second, the chaotic component introduced into the movements of celestial bodies by gravitational interactions with the planets of the Solar System such that a very small difference in initial conditions can result in huge differences billions of years later.

“To surmount these problems, we had to do a very large statistical study simulating a million orbits,” Morais explained. “Studies on this scale had never been done before. Simulations typically consider a thousand possibilities at most.”

The simulations included not only the gravitational effect of planets but also the gravitational influence of the Galaxy because for objects at a great distance from the Sun, this component becomes relevant. They recreated the trajectory of (514107) 2015 BZ509 since the end of our Solar System’s planet-formation phase approximately 4.5 billion years ago and showed that its orbit has remained stable throughout this period within the limits of the margin of error.

Hence, the uniqueness of (514107) 2015 BZ509 compared with other asteroids in the group of retrograde Centaurs, ordinary asteroids that were expelled to a remote region of the Solar System, the Oort Cloud, by the gravitational instability due to the rapid growth of the giant planets. 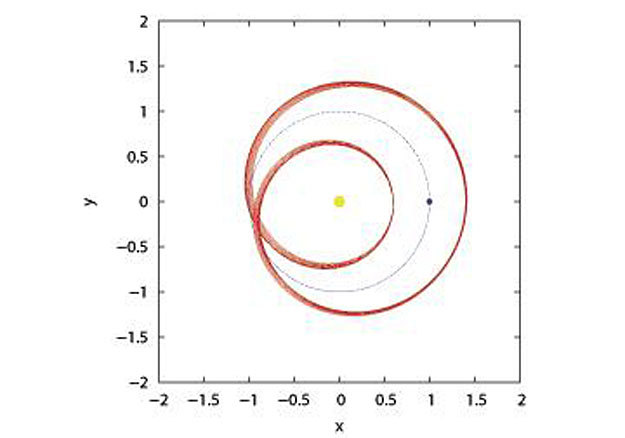 The motion of 2015 BZ509 (red line) relative to that of Jupiter (small blue circle) repeats every six years, always avoiding collision with the planet. Jupiter and the asteroid orbit the Sun (yellow circle) every 12 years. Their relative motion is projected on the plane of Jupiter’s orbit. The asteroid moves close to but not exactly in this plane. CREDIT Maria Helena Moreira Morais

The retrograde Centaurs originally orbited the Sun in the same direction as all other bodies in the Solar System, but owing to their extreme distance from the Sun, the Galaxy’s gravity affected their movement to such an extent that some became retrograde. This process took approximately one billion years. Later, some Centaurs were pulled back into the region influenced by the giant planets.

The statistical study showed that none of this happened to (514107) 2015 BZ509. This asteroid has stably occupied the path corresponding to Jupiter’s orbit for at least 4.5 billion years and is a retrograde co-orbital asteroid of Jupiter.

“The conclusion must be that this asteroid came from outside the Solar System. It must have been cut loose from a neighboring star system and been captured by Jupiter’s powerful gravitational field. Synchronism with Jupiter makes its orbit stable,” Morais said.

The migration of objects from one system to another is not impossible. The Sun was formed together with other stars in a star nursery, so the density of stars in the Sun’s vicinity was greater in the past than it is now. Nearby stars later moved away. Recent studies suggest that the Oort Cloud itself may partly consist of objects captured from other stars in the Solar System’s infancy.

“At the end of 2017, our system was visited by another extrasolar asteroid called ‘Oumuamua [‘messenger from afar arriving first’ in Hawaiian],” Morais recalled. “It traveled so fast that the Sun’s attraction bent its path slightly and made it hyperbolic. It would have had to be moving less fast for the trajectory to become elliptical, in which case it would have been captured by the Solar System.”

The study of (514107) 2015 BZ509 is far from over and in fact has only just begun. The object is a witness to the Solar System’s infancy and could provide precious information about the environment that existed in the Sun’s vicinity when the Solar System was formed.

“We may possibly be able to advance more if we can determine its chemical composition,” Morais said. “Given that star systems have distinct chemical compositions, immigrant asteroids like (514107) 2015 BZ509 may have enriched the Solar System with elements that didn’t exist here originally. In this way, they may have contributed to the emergence of life on Earth.”

The article “An interstellar origin for Jupiter’s retrograde co-orbital asteroid” (DOI:10.1093/mnrasl/sly057) by F. Namouni and M.H.M. Morais is published in Monthly Notices of the Royal Astronomical Society: Letters and can be accessed at academic.oup.com/mnrasl/article-abstract/477/1/L117/4996014?redirectedFrom=fulltext.

The São Paulo Research Foundation (FAPESP) is a public institution with the mission of supporting scientific research in all fields of knowledge by awarding scholarships, fellowships and grants to investigators linked with higher education and research institutions in the State of São Paulo, Brazil. FAPESP is aware that the very best research can only be done by working with the best researchers internationally. Therefore, it has established partnerships with funding agencies, higher education, private companies, and research organizations in other countries known for the quality of their research and has been encouraging scientists funded by its grants to further develop their international collaboration. For more information: http://www.fapesp.br/en.