The Emirates Mars Mission, the first interplanetary exploration undertaken by an Arab nation, today released stunning images of Mars’ enigmatic discrete auroras, following a series of revolutionary observations that promise new answers – and new questions – about the interactions between Mars’ atmosphere, the planet’s magnetic fields and the solar wind.
The observations include a never-before seen phenomenon, dubbed the ‘sinuous discrete aurora’ by the EMM team, a huge worm-like aurora that extends halfway around the Red planet.

“When we first imaged Mars’ discrete aurora shortly after the Hope probe’s arrival at Mars in 2021, we knew we had unveiled new potential to make observations never before possible on this scale, and we took the decision to increase our focus on these auroras.” said Emirates Mars Mission Science Lead, Hessa Al Matroushi. “We can obtain nearly whole-disk, synoptic snapshots of the atmosphere to investigate atmospheric phenomena and interactions. It means we are seeing discrete auroral effects on a massive scale and in ways we never anticipated.”

The sinuous discrete aurora consists of long worm-like streaks of energised electron emission in the upper atmosphere extending many thousands of kilometres, stretching from the dayside into the nightside of Mars. Imaged when Mars was experiencing the effect of a solar storm, resulting in a faster, more turbulent stream of solar wind electrons than usual, these aurora observations are some of the brightest and most extensive yet seen by Hope. They include elongated shapes, which may be caused by similarly elongated regions of electron energization conditions in the magnetotail.

Omran Sharaf, EMM project director, said, “Having additional bandwidth and resources available to us meant we could be opportunistic and focus more on the area of discrete auroras than we had originally planned. That agility has certainly paid off as we have now opened up whole new avenues of investigation into these transient and dynamic phenomena. Novel science was a core mission objective and this is certainly novel.”

Observations made using Hope’s EMUS (The Emirates Mars Ultraviolet Spectrometer) instrument range between 90-180 nanometre wavelengths. Found at a wavelength of 130.4 nm, the UV emissions imaged in the new set of observations show where energetic electrons are smashing into atoms and molecules in the Martian upper atmosphere, some 130 km above the planetary surface.

These electrons come from the solar wind and are energized by electric fields in Mars’ magnetosphere.

Dr. Rob Lillis, EMUS team member at the University of California, Berkeley, said: “The sinuous discrete aurora was a shocking discovery that in many ways has us scratching our heads and going back to the drawing board. We have ideas, but no solid explanation for why we are observing intense aurora of this shape and at planetary scales. We now have the opportunity to re-examine prior observations of Mars by missions such as MAVEN and Mars Express to search for signatures that could flesh out Hope’s new observations and perhaps help us try and unpick quite what is happening here.” 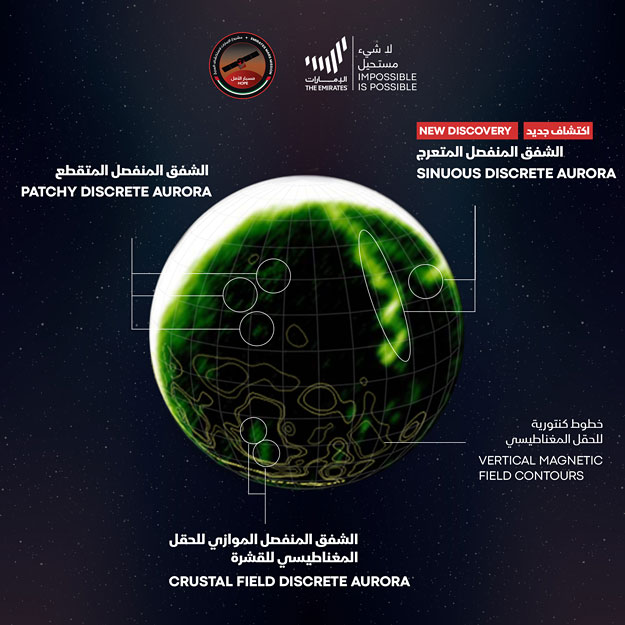 Electrons follow magnetic field lines, so their paths to the atmosphere are determined by the magnetic fields in this environment. The new observations made by Hope include ‘draped’ field lines, which don’t touch the nightside atmosphere, ‘closed’ field lines which connect to the crust at both ends, and ‘open’ field lines which connect the crust to the solar wind. These ‘open’ field lines funnel electrons toward the atmosphere in sometimes intricate patterns, which are then reflected in the resulting UV emission detected by EMUS. Because they are spatially confined, these emissions are known as “discrete auroras”.

Alongside auroras defined by Mars’ crustal field, the complex shapes of energised electron impact observed by Hope open up new avenues for our understanding of the way in which the combination of planetary and solar interactions impact Mars’ atmospheric dynamics.

Three types of aurora have previously been observed around Mars: the diffuse aurora is observed only during intense solar storms, when interactions with the highest energy particles cause the atmosphere around the entire planet to light up. In contrast, the discrete aurora is highly localised and observations made to date have appeared to bear out the theory that it is directly linked to the patchy magnetic fields produced by magnetized minerals embedded in Mars’ crust. Both of these aurorae are observed on Mars’ nightside, while a third class, the proton aurora, has been measured on Mars’ dayside and is driven by interactions between the solar wind and hydrogen in Mars’ exosphere. 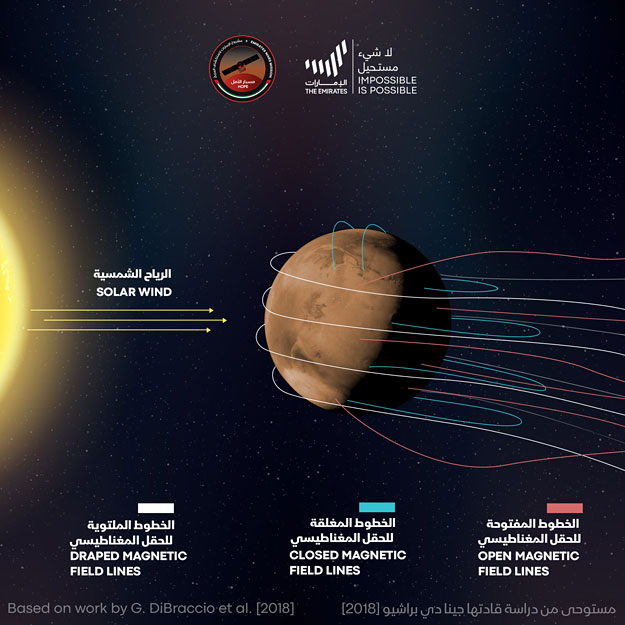 One of three instruments on board Mars Hope Probe, EMUS’ principal science goal is the measurement of oxygen and carbon monoxide in Mars’ thermosphere and the variability of hydrogen and oxygen in the exosphere.

Hope is following its planned 20,000 – 43,000 km elliptical science orbit, with an inclination to Mars of 25 degrees. The probe completes one orbit of the planet every 55 hours and captures a full planetary data sample every nine days throughout its two-year mission to map Mar’s atmospheric dynamics.

EMM and the Hope probe are the culmination of a knowledge transfer and development effort started in 2006, which has seen Emirati engineers working with partners around the world to develop the UAE’s spacecraft design, engineering and manufacturing capabilities. Hope is a fully autonomous spacecraft, carrying three instruments to measure Mars’ atmosphere. Weighing some 1,350 kg, and approximately the size of a small SUV, the spacecraft was designed and developed by MBRSC engineers working with academic partners, including LASP at the University of Colorado, Boulder; Arizona State University and the University of California, Berkeley.

The Emirates Mars Mission is studying the Martian atmosphere and the relationship between the upper layer and lower regions and, for the first time, gives the international science community full access to a holistic view of the Martian atmosphere at different times of the day, through different seasons. Science data releases have been taking place every three months, with the information made freely accessible globally to researchers and enthusiasts,

The Hope Probe’s historic arrival at the Red Planet coincided with a year of celebrations to mark the UAE’s Golden Jubilee in 2021.

About the Emirates Mars Mission

Announced in July 2014 by the UAE President His Highness Sheikh Khalifa Bin Zayed Al Nahyan, and His Highness Sheikh Mohammed bin Rashid Al Maktoum, Vice President and Prime Minister of the United Arab Emirates and Ruler of Dubai, the Emirates Mars Mission has been developed by the Mohammed Bin Rashid Space Centre (MBRSC), in conjunction with its knowledge transfer partners and funded by the UAE Space Agency.

Conceptualized to disrupt and accelerate the United Arab Emirates’ space sector through shaping a scientific community, and boosting space education in the country, the Probe aims to build the first full picture of Mars’s climate throughout the Martian year.

The Hope Probe reached Mars orbit in 2021, the 50th anniversary of the foundation of the UAE, which became an independent nation on December 2, 1971.