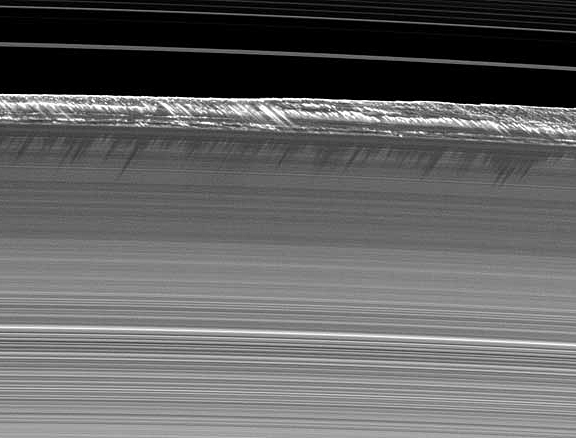 Scientists believe they finally understand why one of the most dynamic regions in Saturn’s rings has such an irregular and varying shape, thanks to images captured by NASA’s Cassini spacecraft. And the answer, published online today in the Astronomical Journal, is this: The rings are behaving like a miniature version of our own Milky Way galaxy.

Scientists believe they finally understand why one of the most dynamic regions in Saturn’s rings has such an irregular and varying shape, thanks to images captured by NASA’s Cassini spacecraft. And the answer, published online today in the Astronomical Journal, is this: The rings are behaving like a miniature version of our own Milky Way galaxy.

This new insight, garnered from images of Saturn’s most massive ring, the B ring, may answer another long-standing question: What causes the bewildering variety of structures seen throughout the very densest regions of Saturn’s rings?

Another finding from new images of the B ring’s outer edge was the presence of at least two perturbed regions, including a long arc of narrow, shadow-casting peaks as high as 3.5 kilometers (2 miles) above the ring plane. The areas are likely populated with small moons that might have migrated across the outer part of the B ring in the past and got trapped in a zone affected by the moon Mimas’ gravity. This process is commonly believed to have configured the present-day solar system.

“We have found what we hoped we’d find when we set out on this journey with Cassini nearly 13 years ago: visibility into the mechanisms that have sculpted not only Saturn’s rings, but celestial disks of a far grander scale, from solar systems, like our own, all the way to the giant spiral galaxies,” said Carolyn Porco, co-author on the new paper and Cassini imaging team lead, based at the Space Science Institute, Boulder, Colo.

New images and movies of the outer B ring edge can be found at http://www.nasa.gov/cassini, http://saturn.jpl.nasa.gov and http://ciclops.org .

Since NASA’s Voyager spacecraft flew by Saturn in 1980 and 1981, scientists have known that the outer edge of the planet’s B ring was shaped like a rotating, flattened football by the gravitational perturbations of Mimas. But it was clear, even in Voyager’s findings, that the outer B ring’s behavior was far more complex than anything Mimas alone might do.

Now, analysis of thousands of Cassini images of the B ring taken over a four-year period has revealed the source of most of the complexity: at least three additional, independently rotating wave patterns, or oscillations, that distort the B ring’s edge. These oscillations, with one, two or three lobes, are not created by any moons. They have instead spontaneously arisen, in part because the ring is dense enough, and the B ring edge is sharp enough, for waves to grow on their own and then reflect at the edge.

“These oscillations exist for the same reason that guitar strings have natural modes of oscillation, which can be excited when plucked or otherwise disturbed,” said Joseph Spitale, lead author on today’s article and an imaging team associate at the Space Science Institute. “The ring, too, has its own natural oscillation frequencies, and that’s what we’re observing.”

Astronomers believe such “self-excited” oscillations exist in other disk systems, like spiral disk galaxies and proto-planetary disks found around nearby stars, but they have not been able to directly confirm their existence. The new observations confirm the first large-scale wave oscillations of this type in a broad disk of material anywhere in nature.

Self-excited waves on small, 100-meter (300-foot) scales have been previously observed by Cassini instruments in a few dense ring regions and have been attributed to a process called “viscous overstability.” In that process, the ring particles’ small, random motions feed energy into a wave and cause it to grow. The new results confirm a Voyager-era predication that this same process can explain all the puzzling chaotic waveforms found in Saturn’s densest rings, from tens of meters up to hundreds of kilometers wide.

“Normally viscosity, or resistance to flow, damps waves — the way sound waves traveling through the air would die out,” said Peter Goldreich, a planetary ring theorist at the California Institute of Technology in Pasadena. “But the new findings show that, in the densest parts of Saturn’s rings, viscosity actually amplifies waves, explaining mysterious grooves first seen in images taken by the Voyager spacecraft.”

The two perturbed B ring regions found orbiting within Mimas’ zone of influence stretch along arcs up to 20,000 kilometers (12,000 miles) long. The longest one was first seen last year when the sun’s low angle on the ring plane betrayed the existence of a series of tall structures through their long, spiky shadows. The small moons disturbing the material are probably hundreds of meters to possibly a kilometer or more in size.

The Cassini-Huygens mission is a cooperative project of NASA, the European Space Agency and the Italian Space Agency. The Jet Propulsion Laboratory, a division of the California Institute of Technology in Pasadena, manages the mission for NASA’s Science Mission Directorate, Washington. The Cassini orbiter and its two onboard cameras were designed, developed and assembled at JPL. The imaging operations center is based at the Space Science Institute in Boulder, Colo.