The Event Horizon Telescope (EHT) — a planet-scale array of eight ground-based radio telescopes forged through international collaboration — was designed to capture images of a black hole.
Today, in coordinated press conferences across the globe, EHT researchers reveal that they have succeeded, unveiling the first direct visual evidence of a supermassive black hole and its shadow.

– Download the full high-resolution image of the Black Hole.

This breakthrough was announced in a series of six papers published in a special issue of The Astrophysical Journal Letters. The image reveals the black hole at the center of Messier 87, a massive galaxy in the nearby Virgo galaxy cluster. This black hole resides 55 million light-years from Earth and has a mass 6.5-billion times that of the Sun.

“This is a huge day in astrophysics,” said NSF Director France Córdova. “We’re seeing the unseeable. Black holes have sparked imaginations for decades. They have exotic properties and are mysterious to us. Yet with more observations like this one they are yielding their secrets. This is why NSF exists. We enable scientists and engineers to illuminate the unknown, to reveal the subtle and complex majesty of our universe.”

The EHT links telescopes around the globe to form an Earth-sized virtual telescope with unprecedented sensitivity and resolution. The EHT is the result of years of international collaboration and offers scientists a new way to study the most extreme objects in the Universe predicted by Einstein’s general relativity during the centennial year of the historic experiment that first confirmed the theory.

“We have taken the first picture of a black hole,” said EHT project director Sheperd S. Doeleman of the Center for Astrophysics | Harvard & Smithsonian. “This is an extraordinary scientific feat accomplished by a team of more than 200 researchers.”

The National Science Foundation (NSF) played a pivotal role in this discovery by funding individual investigators, interdisciplinary scientific teams and radio astronomy research facilities since the inception of EHT. Over the last two decades, NSF has directly funded more than $28 million in EHT research, the largest commitment of resources for the project.

Black holes are extraordinary cosmic objects with enormous masses but extremely compact sizes. The presence of these objects affects their environment in extreme ways, warping spacetime and super-heating any surrounding material. 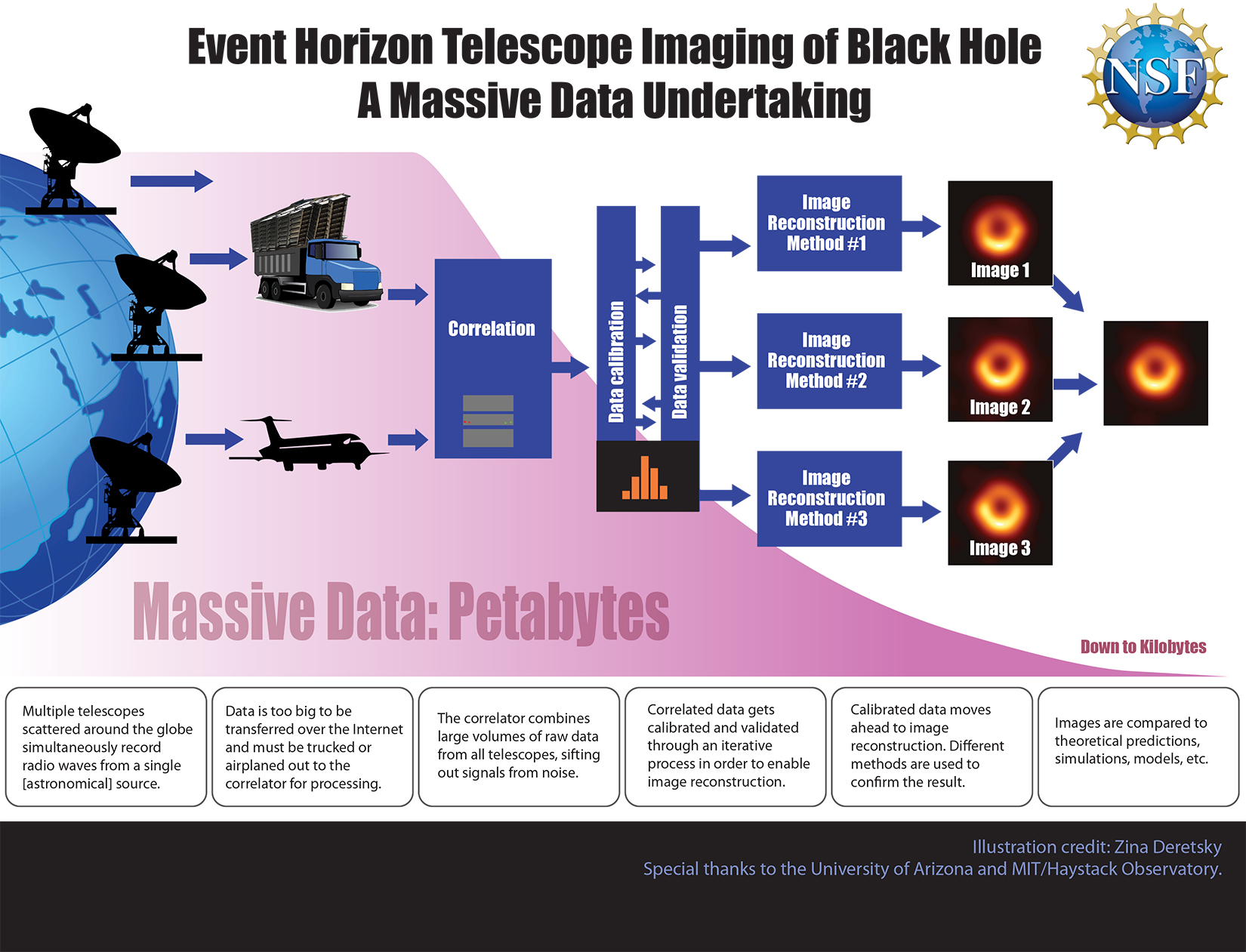 For the Event Horizon Telescope, resolving the image of M87* from petabytes of information was a Big Data challenge. This infographic helps explain how they accomplished that monumental task.

“If immersed in a bright region, like a disc of glowing gas, we expect a black hole to create a dark region similar to a shadow — something predicted by Einstein’s general relativity that we’ve never seen before,” explained chair of the EHT Science Council Heino Falcke of Radboud University, the Netherlands. “This shadow, caused by the gravitational bending and capture of light by the event horizon, reveals a lot about the nature of these fascinating objects and allowed us to measure the enormous mass of M87’s black hole.”

Multiple calibration and imaging methods have revealed a ring-like structure with a dark central region — the black hole’s shadow — that persisted over multiple independent EHT observations.

“Once we were sure we had imaged the shadow, we could compare our observations to extensive computer models that include the physics of warped space, superheated matter and strong magnetic fields. Many of the features of the observed image match our theoretical understanding surprisingly well,” remarks Paul T.P. Ho, EHT Board member and Director of the East Asian Observatory. “This makes us confident about the interpretation of our observations, including our estimation of the black hole’s mass.”

Creating the EHT was a formidable challenge that required upgrading and connecting a worldwide network of eight pre-existing telescopes deployed at a variety of challenging high-altitude sites. These locations included volcanoes in Hawai`i and Mexico, mountains in Arizona and the Spanish Sierra Nevada, the Chilean Atacama Desert, and Antarctica.

The EHT observations use a technique called very-long-baseline interferometry (VLBI). which synchronizes telescope facilities around the world and exploits the rotation of our planet to form one huge, Earth-size telescope observing at a wavelength of 1.3mm. VLBI allows the EHT to achieve an angular resolution of 20 micro-arcseconds — enough to read a newspaper in New York from a sidewalk café in Paris.

The construction of the EHT and the observations announced today represent the culmination of decades of observational, technical, and theoretical work. This example of global teamwork required close collaboration by researchers from around the world. Thirteen partner institutions worked together to create the EHT, using both pre-existing infrastructure and support from a variety of agencies. Key funding was provided by the US National Science Foundation, the EU’s European Research Council (ERC), and funding agencies in East Asia.

“We have achieved something presumed to be impossible just a generation ago,” concluded Doeleman. “Breakthroughs in technology, connections between the world’s best radio observatories, and innovative algorithms all came together to open an entirely new window on black holes and the event horizon.”

Dimitrios Psaltis, University of Arizona in Tucson, EHT project scientist
“The size and shape of the shadow matches the precise predictions of Einstein’s general theory of relativity, increasing our confidence in this century-old theory. Imaging a black hole is just the beginning of our effort to develop new tools that will enable us to interpret the massively complex data that nature gives us.”

Colin Lonsdale, Director of MIT Haystack Observatory
“What really made this realistic as a science goal was technology provided by the computing world, which finally caught up, and overtook, costly custom-built instrumentation. Haystack adapted newly available high-capacity hard disk drives and fast, flexible processor chips, and designed them into systems that could be used for VLBI. Once that key transition had occurred, successive generations of the systems could readily take advantage of industry-driven performance increases over time, and after more than a decade, the prodigious recording and processing speeds demanded by the EHT and black hole imaging were made a reality.”

Tony Beasley, director of NSF’s National Radio Astronomy Observatory
“Through its leadership in ALMA and long-term support for the EHT, NRAO has once again helped to advance our understanding of the cosmos and the fundamental laws physics. This observation clearly illustrates the value of radio astronomy to scientific advancement. The next generation of radio telescopes, including the Next Generation VLA, will yield many more groundbreaking results.”