Antihydrogen Trapped for the First Time 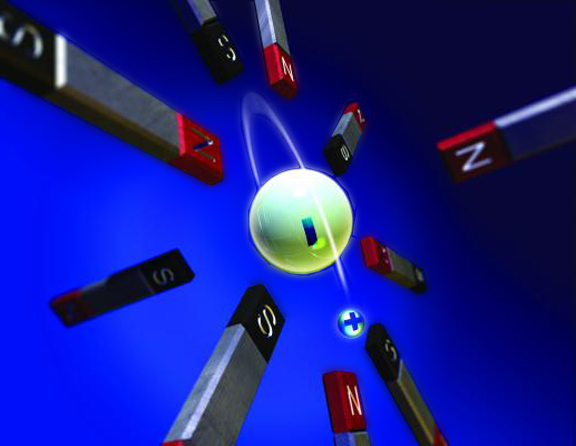 Physicists working at the European Organization for Nuclear Research (CERN) in Geneva, Switzerland, have succeeded in trapping antihydrogen – the antimatter equivalent of the hydrogen atom – a milestone that could soon lead to experiments on a form of matter that disappeared mysteriously shortly after the birth of the universe 14 billion years ago.

Physicists working at the European Organization for Nuclear Research (CERN) in Geneva, Switzerland, have succeeded in trapping antihydrogen – the antimatter equivalent of the hydrogen atom – a milestone that could soon lead to experiments on a form of matter that disappeared mysteriously shortly after the birth of the universe 14 billion years ago.

The first artificially produced low energy antihydrogen atoms – consisting of a positron, or antimatter electron, orbiting an antiproton nucleus – were created at CERN in 2002, but until now the atoms have struck normal matter and annihilated in a flash of gamma-rays within microseconds of creation.

The ALPHA (Antihydrogen Laser PHysics Apparatus) experiment, an international collaboration that includes physicists from the University of California, Berkeley, and Lawrence Berkeley National Laboratory (LBNL), has now trapped 38 antihydrogen atoms, each for more than one-tenth of a second.
While the number and lifetime are insufficient to threaten the Vatican – in the 2000 novel and 2009 movie “Angels & Demons,” a hidden vat of potentially explosive antihydrogen was buried under St. Peter’s Basilica in Rome – it is a starting point for learning new physics, the researchers said.

“We are getting close to the point at which we can do some classes of experiments on the properties of antihydrogen,” said Joel Fajans, UC Berkeley professor of physics, LBNL faculty scientist and ALPHA team member. “Initially, these will be crude experiments to test CPT symmetry, but since no one has been able to make these types of measurements on antimatter atoms at all, it’s a good start.”
CPT (charge-parity-time) symmetry is the hypothesis that physical interactions look the same if you flip the charge of all particles, change their parity – that is, invert their coordinates in space – and reverse time. Any differences between antihydrogen and hydrogen, such as differences in their atomic spectrum, automatically violate CPT, overthrow today’s “standard model” of particles and their interactions, and may explain why antimatter, created in equal amounts during the universe’s birth, is largely absent today.

The team’s results will be published online Nov. 17 in advance of its print appearance in the British journal Nature.

Antimatter, first predicted by physicist Paul Dirac in 1931, has the opposite charge of normal matter and annihilates completely in a flash of energy upon interaction with normal matter. While astronomers see no evidence of significant antimatter annihilation in space, antimatter is produced during high-energy particle interactions on earth and in some decays of radioactive elements. UC Berkeley physicists Emilio Segre and Owen Chamberlain created antiprotons in the Bevatron accelerator at the Lawrence Radiation Laboratory, now LBNL, in 1955, confirming their existence and earning the scientists the 1959 Nobel Prize in physics.

Slow antihydrogen was produced at CERN in 2002 thanks to an antiproton decelerator that slowed antiprotons enough for them to be used in experiments that combined them with a cloud of positrons. The ATHENA experiment, a broad international collaboration, reported the first detection of cold antihydrogen, with the rival ATRAP experiment close behind.

The ATHENA experiment closed down in 2004, to be superseded by ALPHA, coordinated by Jeffrey Hangst of the University of Aarhus in Denmark. Since then, the ALPHA and ATRAP teams have competed to trap antihydrogen for experiments, in particular, laser experiments to measure the antihydrogen spectrum (the color with which it glows) – and gravity measurements. Before the recent results, the CERN experiments have produced – only fleetingly – tens of millions of antihydrogen atoms, Fajans said.
ALPHA’s approach was to cool antiprotons and compress them into a matchstick-size cloud (20 millimeters long and 1.4 millimeters in diameter). Then, using autoresonance, a technique developed by UC Berkeley visiting professor Lazar Friedland and first explored in plasmas by Fajans and former U.C Berkeley graduate student Erik Gilson, the cloud of cold, compressed antiprotons is nudged to overlap a like-size positron cloud, where the two particles mate to form antihydrogen.
All this happens inside a magnetic bottle that traps the antihydrogen atoms. The magnetic trap is a specially configured magnetic field that Fajans and then-UC Berkeley undergraduate Andrea Schmidt first proposed, using an unusual and expensive octupole superconducting magnet to create a more stable plasma.

“For the moment, we keep antihydrogen atoms around for at least 172 milliseconds – about a sixth of a second – long enough to make sure we have trapped them,” said colleague Jonathan Wurtele, UC Berkeley professor of physics and LBNL faculty scientist. Wurtele collaborated with LBNL visitor Katia Gomberoff, staff members Alex Friedman, David Grote and Jean-Luc Vay and with Fajans to simulate the new and original magnetic configurations.

Trapping antihydrogen isn’t easy, Fajans said, because it is a neutral, or chargeless, particle. Magnetic bottles are generally used to trap charged particles, such as ionized atoms. These charged particles spiral along magnetic field lines until they encounter an electric field that bounces them back towards the center of the bottle.

Neutral antihydrogen, however, would normally be unaffected by these fields. But the team takes advantage of the tiny magnetic moment of the antihydrogen atom to trap it using a steeply increasing field – a so-called magnetic mirror – that reflects them backward toward the center. Because the magnetic moment is so small, the antihydrogen has to be very cold: less than about one-half degree above absolute zero (0.5 Kelvin). That means the team had to slow down the antiprotons by a factor of one hundred billion from their initial energy emerging from the antiproton decelerator.
Once trapped, the experimenters sweep out the lingering antiprotons with an electric field, then shut off the mirror fields and let the trapped antihydrogen atoms annihilate with normal matter.

Surrounding detectors are sensitive to the charged pions that result from the proton-antiproton annihilation. Cosmic rays can also set off the detector, but their straight-line tracks can be easily distinguished, Fajans said. A few antiprotons could potentially remain in the trap, and their annihilations would look similar to those of antihydrogen, but the physicists’ simulations show that such events can also be successfully distinguished from antihydrogen annihilations.
During August and September of 2010, the team detected an antihydrogen atom in 38 of the 335 cycles of antiproton injection. Given that their detector efficiency is about 50 percent, the team calculated that it captured approximately 80 of the several million antihydrogen atoms produced during these cycles. Experiments in 2009 turned up six candidate antihydrogen atoms, but they have not been confirmed.

ALPHA continues to detect antihydrogen atoms at an increasing rate as the experimenters learn how to better tune their experiment, Fajans said.