International teams of astronomers have used the Atacama Large Millimeter/submillimeter Array (ALMA) to explore the distant corner of the Universe first revealed in the iconic images of the Hubble Ultra Deep Field (HUDF).
These new ALMA observations are significantly deeper and sharper than previous surveys at millimetre wavelengths. They clearly show how the rate of star formation in young galaxies is closely related to their total mass in stars. They also trace the previously unknown abundance of star-forming gas at different points in time, providing new insights into the “Golden Age” of galaxy formation approximately 10 billion years ago.

The new ALMA results will be published in a series of papers appearing in the Astrophysical Journal and Monthly Notices of the Royal Astronomical Society. These results are also among those being presented this week at the Half a Decade of ALMA conference in Palm Springs, California, USA. 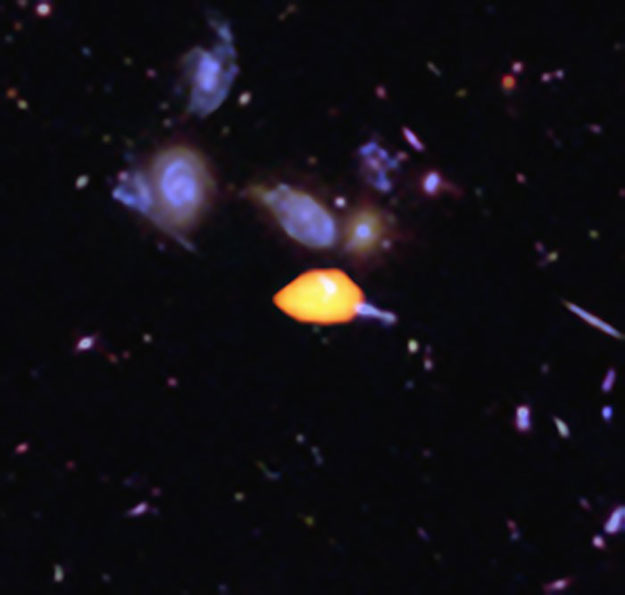 ALMA surveyed the Hubble Ultra Deep Field, uncovering new details of the star-forming history of the Universe. This close-up image reveals one such galaxy (orange), rich in carbon monoxide, showing it is primed for star formation. The blue features are galaxies imaged by Hubble. This image is based on the very deep ALMA survey by Manuel Aravena, Fabian Walter and colleagues, covering about one sixth of the full HUDF area. Credit: B. Saxton (NRAO/AUI/NSF); ALMA (ESO/NAOJ/NRAO); NASA/ESA Hubble.

Astronomers using ALMA have now surveyed this seemingly unremarkable, but heavily studied, window into the distant Universe for the first time both deeply and sharply in the millimetre range of wavelengths [1]. This allows them to see the faint glow from gas clouds and also the emission from warm dust in galaxies in the early Universe.

ALMA has observed the HUDF for a total of around 50 hours up to now. This is the largest amount of ALMA observing time spent on one area of the sky so far.

One team led by Jim Dunlop (University of Edinburgh, United Kingdom) used ALMA to obtain the first deep, homogeneous ALMA image of a region as large as the HUDF. This data allowed them to clearly match up the galaxies that they detected with objects already seen with Hubble and other facilities.

This study showed clearly for the first time that the stellar mass of a galaxy is the best predictor of star formation rate in the high redshift Universe. They detected essentially all of the high-mass galaxies [2] and virtually nothing else.

Jim Dunlop, lead author on the deep imaging paper sums up its importance: “This is a breakthrough result. For the first time we are properly connecting the visible and ultraviolet light view of the distant Universe from Hubble and far-infrared/millimetre views of the Universe from ALMA.”

The second team, led by Manuel Aravena of the Núcleo de Astronomía, Universidad Diego Portales, Santiago, Chile, and Fabian Walter of the Max Planck Institute for Astronomy in Heidelberg, Germany, conducted a deeper search across about one sixth of the total HUDF [3].

“We conducted the first fully blind, three-dimensional search for cool gas in the early Universe,” said Chris Carilli, an astronomer with the National Radio Astronomy Observatory (NRAO) in Socorro, New Mexico, USA and member of the research team. “Through this, we discovered a population of galaxies that is not clearly evident in any other deep surveys of the sky.” [4]

Some of the new ALMA observations were specifically tailored to detect galaxies that are rich in carbon monoxide, indicating regions primed for star formation. Even though these molecular gas reservoirs give rise to the star formation activity in galaxies, they are often very hard to see with Hubble. ALMA can therefore reveal the “missing half” of the galaxy formation and evolution process.

“The new ALMA results imply a rapidly rising gas content in galaxies as we look back further in time,” adds lead author of two of the papers, Manuel Aravena (Núcleo de Astronomía, Universidad Diego Portales, Santiago, Chile). “This increasing gas content is likely the root cause for the remarkable increase in star formation rates during the peak epoch of galaxy formation, some 10 billion years ago.”

The results presented today are just the start of a series of future observations to probe the distant Universe with ALMA. For example, a planned 150-hour observing campaign of the HUDF will further illuminate the star-forming potential history of the Universe.

“By supplementing our understanding of this missing star-forming material, the forthcoming ALMA Large Program will complete our view of the galaxies in the iconic Hubble Ultra Deep Field,” concludes Fabian Walter.

[1] Astronomers specifically selected the area of study in the HUDF, a region of space in the faint southern constellation of Fornax – (https://en.wikipedia.org/wiki/Fornax) (The Furnace), so ground-based telescopes in the southern hemisphere, like ALMA, could probe the region, expanding our knowledge about the very distant Universe.

Probing the deep, but optically invisible, Universe was one of the primary science goals for ALMA.

[2] In this context “high mass” means galaxies with stellar masses greater than 20 billion times that of the Sun ( 2 × 10^10 solar masses). For comparison, the Milky Way is a large galaxy and has a mass of around 100 billion solar masses.

[3] This region of sky is about seven hundred times smaller than the area of the disc of the full Moon as seen from Earth. One of the most startling aspects of the HUDF was the vast number of galaxies found in such a tiny fraction of the sky.

[4] ALMA’s ability to see a completely different portion of the electromagnetic spectrum from Hubble allows astronomers to study a different class of astronomical objects, such as massive star-forming clouds, as well as objects that are otherwise too faint to observe in visible light, but visible at millimetre wavelengths.

The search is referred to as “blind” as it was not focussed on any particular object.

The new ALMA observations of the HUDF include two distinct, yet complementary types of data: continuum observations, which reveal dust emission and star formation, and a spectral emission line survey, which looks at the cold molecular gas fueling star formation. The second survey is particularly valuable because it includes information about the degree to which light from distant objects has been redshifted by the expansion of the Universe. Greater redshift means that an object is further away and seen farther back in time. This allows astronomers to create a three-dimensional map of star-forming gas as it evolves over cosmic time.

This research was presented in papers titled:

1. “A deep ALMA image of the Hubble Ultra Deep Field”, by J. Dunlop et al., to appear in the Monthly Notices of the Royal Astronomical Society.