This information will help scientists better understand Martian climate changes and may allow them to determine the age of the polar caps without using climate models. The 3-D data volumes were assembled from observations by the Shallow Radar (SHARAD) sounder onboard NASA’s Mars Reconnaissance Orbiter (MRO) during more than 2,000 passes over each Martian pole. 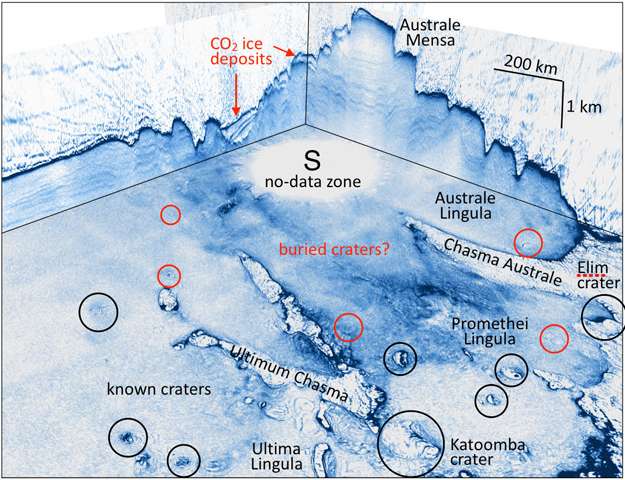 “An example is the more accurate mapping of the CO2 ice deposits in the south that allows us to provide a new, larger estimate of their volume. Sublimation of that CO2 ice into the atmosphere – which is thought to have occurred at various times in Martian history – would more than double the current atmospheric pressure,” said Putzig. “That in turn would allow liquid water to be stable at the surface in many more locations than it is today.”

One type of feature in the polar caps that was never detected or mapped with single-orbit radar profiles is buried impact craters. “In the 3D radar volumes, we can identify and map bowl-shaped features that appear to be buried impact craters, many of them at the base of the icy layers,” Putzig said. “To estimate the age of planetary surfaces, scientists combine information about the number, size, and distribution of craters and knowledge of cratering rates over time within the Solar System.

“Our analysis of the apparent craters at the base of the northern cap yields an age of about 3.5 billion years, which is consistent with the previously estimated age for the surrounding plains from surface cratering statistics,” Putzig said. “This overall agreement gives us greater confidence in identifying buried craters as we continue to search for them within the ices and beneath the southern cap.”

“The 3-D makes these types of investigation much more efficient than our work in the past, and some things that were formerly impossible are now done quickly.” said coauthor and PSI Research Scientist Isaac B. Smith. “This new way of using the radar data saves us from painstakingly mapping every feature in thousands of 2-D profiles. With the 3-D volumes, we can see things immediately that took months or years to map with the 2-D dataset.”

Another addition that the 3-D volumes provide is greater topographic coverage of the poles. The Mars Global Surveyor (MGS) spacecraft provided topographic information from its Mars Orbiter Laser Altimeter (MOLA) instrument between 86.95 degrees north and south, but latitudes more poleward than that were not well measured. For 2-D profiles, this topographic data helps to distinguish radar reflections from surface features on either side of the spacecraft ground track from subsurface reflections that arrive at the same time. The prior lack of topographic data at very high polar latitudes made this important step impossible. However, the MRO orbit reaches latitudes of 87.45 degrees, and surface reflections mapped in the 3-D radar volumes over both caps now provide elevation data in these latitude zones covering 28,500 square kilometers. These new data will allow more accurate radar models for polar observations.

The SHARAD instrument was provided to MRO by the Italian Space Agency (ASI) and its operation is led by the Sapienza University of Rome.