By SpaceRef Editor
June 9, 2015
Filed under Commerce, US, XCOR Aerospace 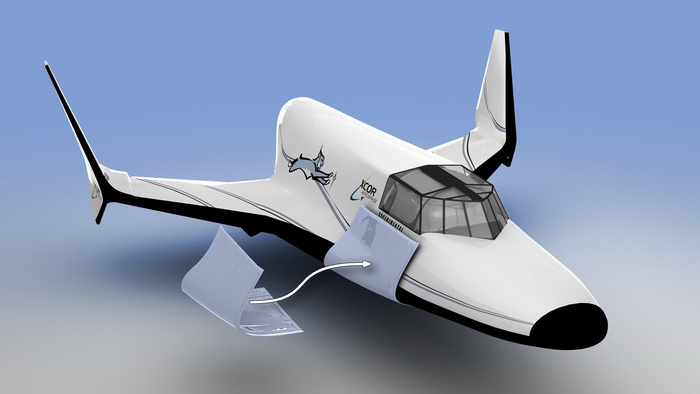 “The chines allow the Lynx fuselage to have a continuous aero surface from the tip to the back of the strakes,” noted XCOR Chief Technology Officer Jeff Greason. “Once the strakes are bonded and the nose is installed, the chines will be added to unify the space between the two, with some custom fitting at each end.”

The chine panels, manufactured by Matrix Composites, are an integral part of the structural airframe and will allow access to vital life support and flight control system components that are mounted within the spacecraft. The panels are a carbon fiber and epoxy sandwich laminate with a lightweight foam core. Matrix Composites will manufacture the chine panels in their Rockledge, Florida facility with completion expected by June 2015.

“As Lynx comes together at Hangar 61 in Mojave, we are expanding our presence in Florida, the future home of our Lynx manufacturing facilities,” said XCOR Chief Executive Officer Jay Gibson. XCOR Aerospace is expanding its Florida presence through a partnership with Space Florida. The company plans to locate its Lynx Mark II manufacturing facilities at Kennedy Space Center. “We could not be more pleased to work with Matrix Composites on this vital Lynx component as we expand our presence in Florida,” added Gibson.

“We are honored that XCOR chose us to supply this integral part of the Lynx spacecraft’s composite body,” said Dave Nesbitt, Matrix Composites’ President. “To be part of their mission of research, science, private spaceflight, and micro satellite launch is very exciting work, highlighting our capabilities with high performance composites.”

About XCOR Aerospace: XCOR Aerospace is based in Mojave, California. It is currently building its Research and Development Center in Midland, Texas, and in the future an operational and manufacturing site at the Kennedy Space Center in Florida. XCOR builds safer, more reliable and reusable rocket-powered vehicles, propulsion systems, advanced non-flammable composites and rocket piston pumps. XCOR works with aerospace prime contractors and government customers on major propulsion systems, while also building Lynx. Lynx is a piloted, two-seat, fully reusable liquid rocket-powered vehicle that takes-off and lands horizontally. The Lynx-family of vehicles serves three primary missions depending on their specific type including: research & scientific missions, private spaceflight, and micro satellite launch (only on Lynx Mark III). Lynx production models (designated Lynx Mark II) are designed to be robust, multi-mission (research / scientific or private spaceflight) commercial vehicles capable of flying to 100+ km in altitude up to four times per day. Lynx vehicles are available to customers in the free world on a wet lease basis to start their own manned space flight programFor more information on XCOR Aerospace, visit www.xcor.com and follow us on Facebook or Twitter as XCOR.