By SpaceRef Editor
March 26, 2013
Filed under Commerce, US, XCOR Aerospace 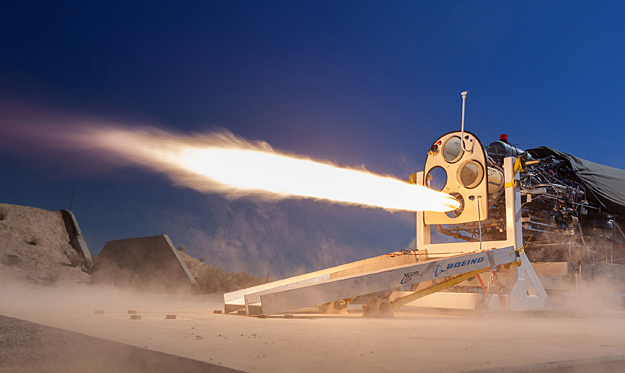 XCOR Aerospace today announced a first in aviation and space history, the firing of a full piston pump-powered rocket engine. This breakthrough is the foundation for fully reusable spacecraft that can fly multiple times per day, every day. It is a game changing technology that has the power to fundamentally alter the way we as a society view, visit, and utilize the abundant resources around our planet and in our solar system.

The initial portion of XCOR’s pump test program culminated in a 67-second engine run with the propulsion system mated to the flight weight Lynx fuselage. After the installation of the flight sized liquid oxygen tank, the next test sequence will extend the engine run duration to the full powered flight duration of the Lynx Mark I suborbital vehicle.

“Through use of our proprietary rocket propellant piston pumps we deliver both kerosene and liquid oxygen to our rocket engines and eliminate the need for heavy, high-pressure fuel and oxidizer tanks. It also enables our propulsion system to fly multiple times per day and last for tens of thousands of flights,” said XCOR Chief Executive Officer Jeff Greason. “This is one more step toward a significant reduction in per-flight cost and turnaround time, while increasing overall flight safety.”

“Unlike the expensive and finicky turbopumps on today’s rocket propulsion systems, XCOR’s piston pumps are designed to be as powerful in their thrust class as turbines, but as easy to manufacture, maintain and operate as an automotive engine,” said XCOR Chief Operating Officer Andrew Nelson. “This is the culmination of a 12 year program to develop this unique technology. The kerosene piston pump has been successfully flight-proven during our 40-flight test program on the X-Racer aircraft. We’ll be entering another flight test program soon with Lynx and these pumps and engines will power XCOR and the industry to the next level.”

About XCOR Aerospace: XCOR Aerospace is on the verge of becoming the most active spaceflight company in the world based on our safer, reliable and reusable rocket-powered vehicles, propulsion systems, advanced non-flammable composites and rocket piston pumps. XCOR is building Lynx, a piloted, two-seat, fully reusable liquid rocket-powered vehicle that takes-off and lands horizontally. The Lynx-family of vehicles serves three primary missions depending on their specific type including: research & scientific missions, private spaceflight, and micro satellite launch (only on the Lynx Mark III). Lynx production models (designated Lynx Mark II) are designed to be robust, multi-mission (research / scientific or private spaceflight) commercial vehicles capable of flying to 100+ km in altitude up to four times per day. Lynx vehicles are available to customers in the free world on a wet lease basis. XCOR also works with aerospace prime contractors and government customers on major propulsion systems development. XCOR Aerospace is based in Mojave, California and is creating a new Research and Development Center in Midland, Texas. (www.xcor.com)