X-ray Satellites Monitor the Clashing Winds of a Colossal Binary 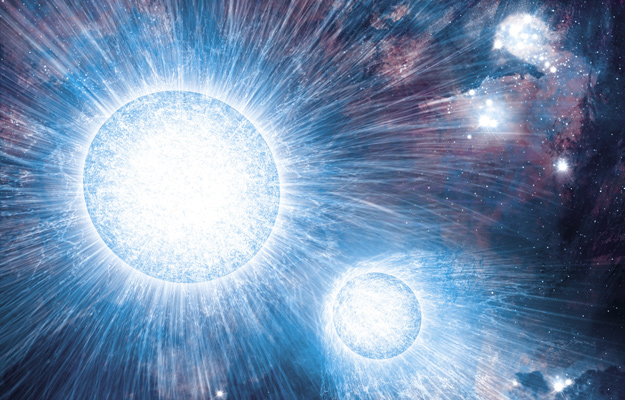 The hottest and most massive stars don’t live long enough to disperse throughout the galaxy. Instead, they can be found near the clouds of gas and dust where they formed — and where they will explode as supernovae after a few million years. They huddle in tight clusters with other young stars or in looser groupings called OB associations, a name reflecting their impressive populations of rare O- and B-type stars.

One of the nearest and richest OB associations in our galaxy is Cygnus OB2, which is located about 4,700 light-years away and hosts some 3,000 hot stars, including about 100 in the O class. Weighing in at more than a dozen times the sun’s mass and sporting surface temperatures five to 10 times hotter, these ginormous blue-white stars blast their surroundings with intense ultraviolet light and powerful outflows called stellar winds.

Two of these stars can be found in the intriguing binary system known as Cygnus OB2 #9. In 2011, NASA’s Swift satellite, the European Space Agency’s XMM-Newton observatory and several ground-based facilities took part in a campaign to monitor the system as the giant stars raced toward their closest approach.

Now, a paper published in the October issue of the journal Astronomy and Astrophysics provides the campaign’s first results and gives a more detailed picture of the stars, their orbits and the interaction of their stellar winds.

An O-type star is so luminous that the pressure of its starlight actually drives material from its surface, creating particle outflows with speeds of several million miles an hour. Put two of these humongous stars in the same system and their winds can collide during all or part of the orbit, creating both radio emission and X-rays.

In 2008, research showed that Cygnus OB2 #9 emitted radio signals that varied every 2.355 years. In parallel, Yael Naze, an astronomer at the University of Liege in Belgium, detected for the first time a signature in the system’s optical spectrum that indicated the presence of two stars. The binary nature of Cygnus OB2 #9 provided a natural explanation for the periodic radio changes.

To maximize their chances of catching X-rays from colliding winds, the researchers needed to monitor the system as the stars raced toward their closest approach, or periastron.

“Our first opportunity came in 2009, but we couldn’t perform all of the necessary observations because the sun was in the same part of the sky,” Naze explained. “That meant waiting for the next close approach, on June 28, 2011.”

NASA’s Swift made five sets of X-ray observations during the 10 months around the date of periastron, and XMM-Newton carried out one high-resolution observation near the predicted time of closest approach. In addition, the Expanded Very Large Array in New Mexico monitored radio emissions, and observations to better refine the orbit were made by the CHARA optical and infrared telescope array on Mount Wilson in California, the Wyoming Infrared Observatory, and the Haute-Provence Observatory in France.

The new data indicate that Cygnus OB2 #9 is a massive binary with components of similar mass and luminosity following long, highly eccentric orbits. The most massive star in the system has about 50 times the sun’s mass, and its companion is slightly smaller, with about 45 solar masses. At periastron, these stellar titans are separated by less than three times Earth’s average distance from the sun.

Two sets of measurements taken 5.5 days apart near the time of periastron — one in late June by XMM-Newton and one in early July by Swift — show that the X-ray flux increased by four times when the stars were closest together. This is compelling evidence for the interaction of fierce stellar winds.

Most massive star binaries lack this feature, and the few that exhibit it tend to show more complex behavior. For example, the wind-wind collision zone may crash onto one of the stars. But in Cygnus OB2 #9, this region remains the same throughout the stars’ orbits, a fact that will help astronomers unravel the various physical processes at work.

Massive stars dramatically shape their environment when they explode as supernovae, but their powerful winds dominate the space around them for millions of years, altering star-formation regions throughout their energy-producing lives.

“There is much we don’t know on how stars form and how galaxies evolve, and Cygnus OB2 #9 gives important new data on the role played by stellar winds from massive stars,” said Neil Gehrels, the principal investigator for Swift.