Observations with NASA’s Chandra X-ray Observatory captured an X-ray outburst from a young star, revealing a probable scenario for the intermittent brightening of the recently discovered McNeil’s Nebula. It appears the interaction between the young star’s magnetic field and an orbiting disk of gas can cause dramatic, episodic increases in the light from the star and disk, illuminating the surrounding gas.

“The story of McNeil’s Nebula is a wonderful example of the importance of serendipity in science,” said Joel Kastner of the Rochester Institute of Technology in Rochester, New York, lead author of a paper in the July 22 issue of Nature describing the X-ray results. “Visible-light images were made of this region several months before Jay McNeil made his discovery, so it could be determined approximately when and by how much the star flared up to produce McNeil’s Nebula.” 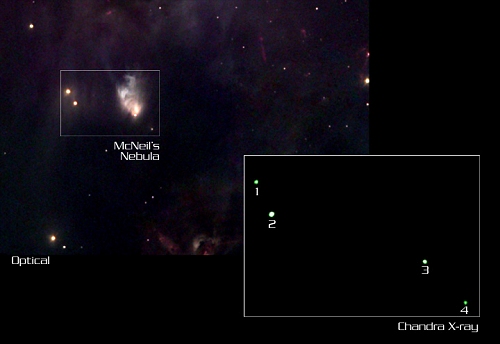 The X-ray/optical comparison of the region surrounding McNeil’s Nebula shows that the position of a source detected by Chandra is coincident with that of a bright infrared and optical source at the apex of the nebula.

The small nebula, which lies in the constellation Orion about 1300 light years from Earth, was discovered with a 3-inch telescope by McNeil, an amateur astronomer from Paducah, Kentucky, in January 2004. In November 2002, a team led by Ted Simon of the Institute for Astronomy in Hawaii had observed the star-rich region with Chandra in search of young, X-ray emitting stars, and had detected several objects. Optical and infrared astronomers had, as part of independent surveys, also observed the region about a year later, in 2003.

After the announcement of McNeil’s discovery, optical, infrared and X-ray astronomers rushed to observe the region again. They found that a young star buried in the nebula had flared up, and was illuminating the nebula. This star was coincident with one of the X-ray sources discovered earlier by Simon.

Chandra observations obtained by Kastner’s group just after the optical outburst showed that the source had brightened fifty-fold in X-rays when compared to Simon’s earlier observation. The visible-light eruption provides evidence that the cause of the X-ray outburst is the sudden infall of matter onto the surface of the star from an orbiting disk of gas.

The differing rotation rates would twist and shear the magnetic field, storing up energy. This energy is eventually released in an energetic, X-ray producing outburst as the magnetic field violently rearranges back to a more stable state. During this period, a large amount of gas can fall onto the star, producing the observed optical and infrared outburst.

A new buildup of gas in the disk could lead to a new outburst in the future. Such a scenario may explain why the brightness of McNeil’s Nebula appears to vary with time. It is faintly present in surveys of this region of Orion in images taken in the 1960s, but absent from images taken in the 1950s and 1990s.