World’s Largest Ground-based Telescope is Given ‘Go Ahead’ 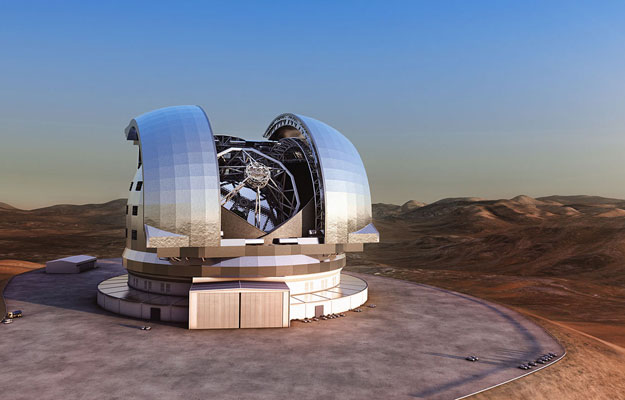 Construction will not commence until provisional votes by four of the member states, including the UK, have been confirmed and 90% of the funding required has been secured. The E-ELT is a 39-m diameter optical/infrared telescope, planned to be tens of times more sensitive than any current telescope of its kind. ESO’s announcement is available at: https://www.eso.org/public/news/eso1225/

Professor John Womersley, Chief Executive of STFC said: “Our commitment to the E-ELT reflects its high priority in our science strategy, the world-leading position of the UK astronomy community, and the potential returns to UK industry. Today’s announcement is an important step towards construction, though the final go-ahead depends of course on obtaining approval by a number of governments (including ours) to such a long term financial commitment”.

The E-ELT will enable astronomers to probe the very highest priority questions in astronomy today. Collecting at least twelve times more light than the current largest optical telescopes, it will push forward our understanding of planets beyond our solar system, including those where life might exist and the nature and distribution of dark matter and dark energy that is thought to make up most of our Universe but as yet is not directly observed or understood.

The UK is playing several leading and key roles in the project. STFC’s UK ATC is coordinating the UK contributions, in collaboration with industry and university partners. The UK, through the University of Oxford and UK ATC in collaboration with other international partners is leading on one of two ‘first light’ instruments, HARMONI, and other UK universities including Durham University are playing key roles in the development of 5 other instruments. This in turn will grant astronomers access to some of the earliest observations carried out on the giant telescope.

Professor Isobel Hook, the UK E-ELT Project Scientist from the University of Oxford, said: “The telescope is set to revolutionise optical and infrared astronomy. Its unique combination of sharp imaging and huge light collecting area will allow us to observe some of the most exciting phenomena in the Universe in much better detail. For example we’ll be able to observe distant galaxies in the process of formation, see the effects of massive black holes on their environment and even search for planets in “habitable zones” beyond our solar system, where life could exist. And perhaps more importantly, the telescope is very likely to make new discoveries that we can’t even imagine now”.

UK industry and research institutions can expect to be richly rewarded for the UK’s involvement in E-ELT. Already around O10 million has been won by the UK for work in the pre-construction phase. Moving into construction phase, the opportunities for industrial contracts will be open to competition within the member states, to at least a value of O800M. Work done so far puts UK industry in a strong position to be successful in bidding against this, especially in the areas of optics manufacture, detectors, software and structural engineering. A UK consortium based at OpTIC Glyndwr in North Wales for example, is developing prototypes for the mirror segments on the primary mirror, aimed at securing potential contracts worth over O100M for manufacturing the production segments in the UK industry.

“Major UK involvement in world-leading astronomical projects is the primary reason the UK joined the European Southern Observatory”, said Professor Gerry Gilmore from Cambridge University who was the UK Council member when the UK joined ESO and Chair of the E-ELT Design Study in its early stages. “UK technology and industry will benefit enormously, and British scientists will be able to lead in the next stages of mankind’s discovery of the nature of time, matter, existence, the origin and far future of the Universe, and the expected discovery of life far outside our own Solar System. The intellectual opportunities are immense, the challenges vast, the potential almost unlimited”.

The UK is involved with several Phase A studies: instruments called HARMONI, EAGLE, OPTIMOS-EVE, CODEX, EPICS, METIS. In addition, a project called CANARY, will prototype key concepts in adaptive optics, particularly those required for the EAGLE instrument. These will ultimately provide a suite of mutually-complementary instruments for observations of the faintest planets, stars, and galaxies that are well beyond the reach of existing telescopes.

Professor Niranjan Thatte, Principal Investigator of E-ELT first light spectrograph (HARMONI), University of Oxford, said: “We are privileged to be leading the design and construction of the first spectrograph for the E-ELT, which will revolutionise observational astronomy through the 2020s and beyond. By studying the light from galaxies, distant and nearby, in great detail, we hope to unravel the physical processes that have shaped the cosmos throughout its history.”

Professor Simon Morris, Deputy Head of Physics, Durham University and co-Principal Investigator for the proposed E-ELT instrument EAGLE, said: “The European Extremely Large Telescope will greatly surpass the (already amazing) suite of four Very Large Telescopes. It will have a huge light collecting area, ways of correcting for atmospheric blurring, and the ability to observe large numbers of faint, distant galaxies at once. This will allow UK astronomers, in collaboration with our European colleagues, to solve many current mysteries about the way our own galaxy formed. UK astronomical instrument builders are also very excited to be taking a number of leading roles in the planned cameras and spectrographs for the telescope”.

Director of STFC’s UK Astronomy Technology Centre, Gillian Wright said: “The E-ELT is an enormously exciting and important project that will enable astronomers to study the universe in unprecedented detail. The major UK involvement in the planned first light instrumentation is a result of our world leading scientific and technical capabilities. This deep involvement in the construction phase will ensure that UK scientists are at the forefront of discoveries with the new telescope”.

The UK instrument programme will be delivered in close collaborations between Durham University, the University of Oxford, STFC’s UK ATC and RAL Space, together with other leading international institutes and UK industry. More information on the UK role in the E-ELT can be found here: http://www.eelt.org.uk/.