By SpaceRef Editor
October 25, 2012
Filed under Astrophysics, McDonald Observatory, US 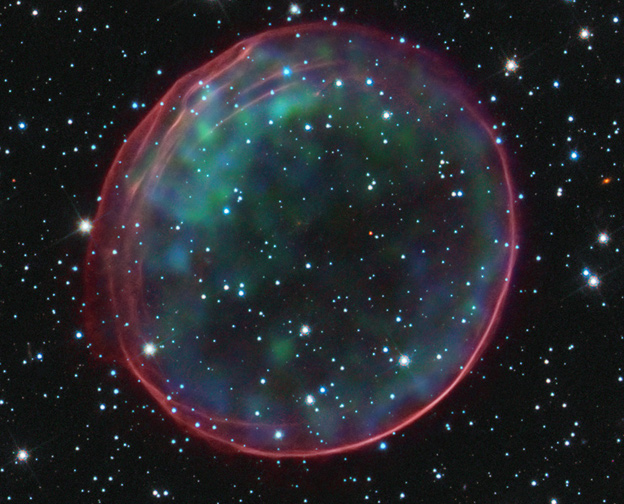 J. Craig Wheeler has studied the exploding stars called supernovae for more than four decades. Now he has a new idea on the identity of the “parents” of one of the most important types of supernovae — the Type Ia, those used as “standard candles” in cosmology studies that led to the discovery of dark energy, the mysterious force causing the universe’s expansion to speed up.

Wheeler lays out his case for supernova parentage in the current issue of The Astrophysical Journal [http://dx.doi.org/10.1088/0004-637X/758/2/123]. He explains why he thinks the parents of Type Ia could be a binary star made up of white dwarf star (the burnt-out remnant of a Sun-like star) and a particular type of small star called an “M dwarf.”

In the paper, he explains that current theories for Type Ia parents don’t correctly match up with telescope data on actual supernovae.

There are two main models today that attempt to explain how Type Ia supernovae are born. One is called a “single-degenerate model,” in which a binary star is made up of a degenerate, or dead star, called a white dwarf paired with a less evolved star. Over time, as the stars orbit each other, the white dwarf’s gravity siphons gas from the atmosphere of its partner star until the white dwarf becomes so massive and dense that it ignites, triggering an immense thermonuclear explosion.

Wheeler wrote the first scientific paper invoking this idea in 1971. Astronomers have been trying to identify what type of star the partner must be ever since.

Astronomers have carefully observed supernovae for decades. In the best-case scenario, a supernova is watched from the time it is discovered and becomes extremely bright, until it fades from view. Its light signature, or spectrum, changes over that time. Any models of supernova parents must reproduce an evolving spectrum that matches that of actual supernovae.

“I believe that the spectra have to be respected,” Wheeler said. “The really high-order constraint [on a supernova model] is to get the spectral evolution correct. That is, you’ve got to get all the bumps and wiggles, and they’ve got to be in the right place at the right times.”

Telescope observations in the last few years have considerably narrowed the possibilities on which models work, he said, “putting tighter and tighter constraints on whether any companion star exists and what kind of star it can be.”

Now, Wheeler thinks maybe a new twist on the single-degenerate model can fill the bill. He says pairing the white dwarf with an M dwarf could do the trick.

In the paper, he lays out evidence why he thinks the M dwarf is a good candidate:

First, M dwarfs are dim. In recent years, astronomers using large telescopes have looked hard at the gaseous remnants left behind by Type Ia supernovae for the partner star that would be left behind after the white dwarf detonated. “One thing blows up as a supernova, the other thing’s got to be left behind,” Wheeler said. “Where is it? We don’t see it.”

Small, red M dwarfs are dim enough to work — even the most massive M dwarf would not show up on Hubble Space Telescope observations. And it’s even possible, Wheeler said, that the white dwarf could have devoured the entire M dwarf before the white dwarf exploded. M dwarfs don’t have heavy cores to leave behind.

Wheeler calls this scenario a “white widow system,” a play on words referencing the stellar binaries known as “black widow systems,” in which a neutron star eats its stellar companion. In the “white widow” case, the predator is a white dwarf.

The second reason the M dwarf is likely the white dwarf’s co-parent in producing Type Ia supernovae is that M dwarfs are magnetic. “They flare, they do all sorts of crazy things,” Wheeler said. His thought experiment supposes that the white dwarf is magnetic as well. “That’s the thrust of the paper, to think about what happens if both stars are magnetic,” he said.

If a magnetic white dwarf and a magnetic M dwarf are in a binary star pair, Wheeler said, their opposite magnetic poles would attract, and they would become tidally and magnetically locked into a rotation in which the same side of each always faces the other and the magnetic poles point directly at one another. In this case, the white dwarf still pulls material off of the M dwarf, but the material would build up on a single spot on the white dwarf that pointed right back at the M dwarf, irradiating it and driving off even more mass, consuming the M dwarf and leading to an eventual explosion.

Wheeler, the Samuel T. and Fern Yanigisawa Regents Professor in Astronomy at The University of Texas at Austin, is the author of the popular-level book “Cosmic Catastrophes: Exploding Stars, Black Holes and Mapping the universe.” He served as president of the American Astronomical Society from 2006 to 2008.