What Can the World Do About Space Debris? An Urgent Call to Action

By SpaceRef Editor
May 12, 2009
Filed under Secure World Foundation, US

Now is the time to reduce the threat to both human spaceflight and satellites from destructive space debris.

That viewpoint emerged from a major gathering of space experts at the International Interdisciplinary Congress on Space Debris, held May 7-9 at the Faculty of Law, McGill University in Montreal, Canada.

The Congress brought together legal, policy, and technical experts from around the globe, including the U.S., Russia, India, China, Canada, and Europe — a unique gathering of officials to thrash out legal, and technical ideas for the next phase of dealing with the space debris issue. 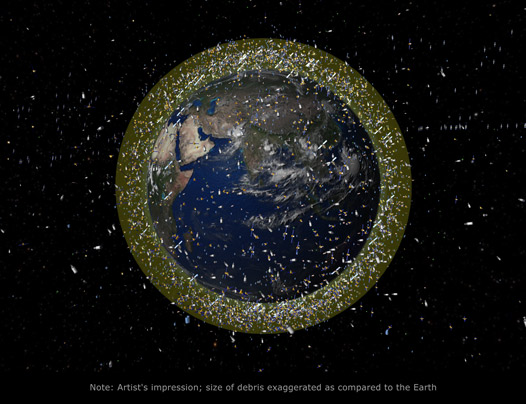 Over the past decade and a half, the world’s major space agencies have been developing a set of orbital debris mitigation guidelines aimed at stemming the creation of new space debris and lessening the impact of existing debris on satellites and human spaceflight. A version of these guidelines was unanimously endorsed by the United Nations in 2008 and several States are in the process of implementing or have already implemented these voluntary measures.

The Congress noted that a critical next step is engaging with the growing number of developing countries that are using satellites to help protect their populations and manage natural resources. While they may not have independent spacefaring capabilities, orbital debris is an area of concern for them and they can contribute meaningfully to the process.

“Tackling the difficult issue of mitigating the destructive effects of space debris requires the attention of experts versed in the legal, policy, and technical and scientific aspects of space debris,” said Dr. Ray Williamson, Executive Director of Secure World Foundation.

“This interdisciplinary Congress illuminated many of the most difficult and thorny issues inherent in tackling space debris problems and provided some important suggestions on a way forward,” Williamson said.

To this end, the Congress explored a variety of legal options for further implementation of debris mitigation guidelines. One possibility mentioned is the establishment of an international regime for dealing with orbital debris similar to the Missile Technology Control Regime, or perhaps the Limited Test Ban Treaty of 1963. There are a variety of other means within international law as well, including codes, declarations and treaties.

Next phase of debris mitigation

Up until now, the debris mitigation process has been focused mainly on the technical aspects, with an enormous amount of research producing excellent recommendations, noted Brian Weeden, Technical Consultant for the Secure World Foundation.

“However, the community is now starting to focus on the legal aspect, which is critical for broadening and strengthening the adoption of debris mitigation guidelines and space safety in general,” Weeden said.

Weeden explained that the recent Congress explored lessons from terrestrial environmental pollution law as well as maritime law that could be applicable to outer space. Furthermore, international law isn’t necessarily the only method for implementing the guidelines. “We are also looking at a variety of other mechanisms, to include economics and industrial standards,” he said.

There was definite consensus from the gathering on the importance of Space Situational Awareness for all space actors, as a means of learning more about the space debris problem and how to tackle it. Many also believed that any international space debris regime also needs to be developed with an eye to the future and an eventual international space traffic control system.

The discussion of orbital debris doesn’t stop with the McGill Congress.

Planning for a second workshop at the University of Cologne in May 2010 is already underway. Sponsored by the German government, this follow-on event will take the inputs and discussions from the McGill Congress and generate specific policy, legal and technical recommendations for the next phase of dealing with debris mitigation.

Additionally, researchers are moving towards the next phase of scientific study. “There is an emerging consensus among the technical community that simply preventing creation of new debris is not going to be enough,” Weeden emphasized.

“At some point we will need to actively remove debris from orbit. Fortunately, new studies are showing that removing as few as five or six objects per year could stabilize the debris population over the long term. The big question right now is which objects to remove first and what is the best method to do so.”

This impressive gathering of experts was co-sponsored by the Erin J. C. Arsenault Trust and the United Nations Office for Outer Space Affairs in Vienna, Austria. Erin Arsenault is the daughter of Secure World Foundation founders, Cynda and Marcel Arsenault.

Secure World Foundation is headquartered in Superior, Colorado, with offices in Washington, D.C. and Vienna, Austria.

The Secure World Foundation is a fully-funded, private operating foundation dedicated to the secure and sustainable use of space for the benefit of Earth and all its peoples.

The Foundation engages with academics, policy makers, scientists and advocates in the space and international affairs communities to support steps that help achieve the secure, sustainable and peaceful uses of outer space with efficient and effective global systems of governance.