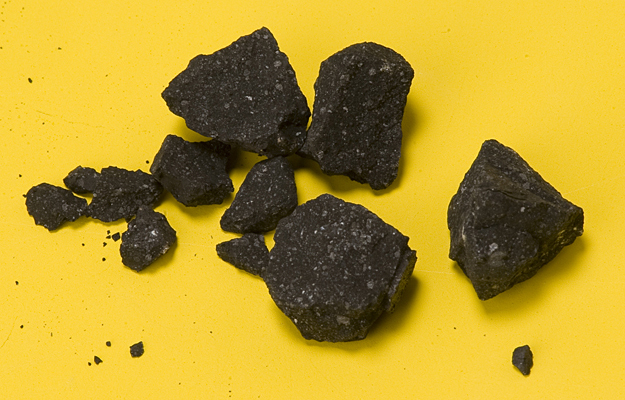 The findings, published today in Science, prove meteorites that were recovered earlier this year at Sutter’s Mill in Coloma, California, are extremely rare Carbonaceous-Mighei (or CM-type carbonaceous chondrite) meteorites and more importantly, the researchers believe they have identified the point of origin of these primitive space rocks.

Of the estimated 100,000-pound asteroid, less than two pounds was recovered on the ground in the form of 77 meteorites. The biggest was 205 grams. Some of the key meteorites studied were found by volunteer search teams led by meteor astronomer Peter Jenniskens of the SETI Institute, Mountain View, Calif., and NASA Ames Research Center, Moffett Field, Calif.

Detection of the falling meteors by Doppler weather radar allowed for rapid recovery so that scientists could study for the first time a primitive meteorite with little exposure to the elements, providing the most pristine look to date at the surface of primitive asteroids.

Western’s participation was focused on the identification and interpretation of the shock waves produced in the atmosphere as the meteoroid disrupted over California before raining meteorites to the ground.

“We looked at low frequency sound waves, called infrasound, from the fireball which produced these meteorites as detected at two stations, one in southern California and one in Washington State,” said Brown, Director of Western’s Centre for Planetary Science and Exploration (http://cpsx.uwo.ca/) and Canada Research Chair in Meteor Astronomy.

“By looking at the frequency of the sound from the fireball at these two stations, we were able to estimate that the total energy released by the fireball as it descended over California was comparable to four kilotons of TNT explosive power,” explained Brown. “Based on the measured speed of the fireball, this pins the size of the object to be several meters across before it entered the atmosphere.”

“The large size, as determined from our infrasound measurements, may help to explain how an object moving so fast, almost 30 kilometers per second, was able to produce a few small meteorites on the ground.”

According to Brown, normal meteorite falls occur at about half this speed. In effect, the large size of the object was what allowed survival of material for later analysis.

Western delivers an academic experience second to none. Since 1878, The Western Experience has combined academic excellence with life-long opportunities for intellectual, social and cultural growth in order to better serve our communities. Our research excellence expands knowledge and drives discovery with real-world application. Western attracts individuals with a broad worldview, seeking to study, influence and lead in the international community.