Water signature in distant planet shows clues to its formation 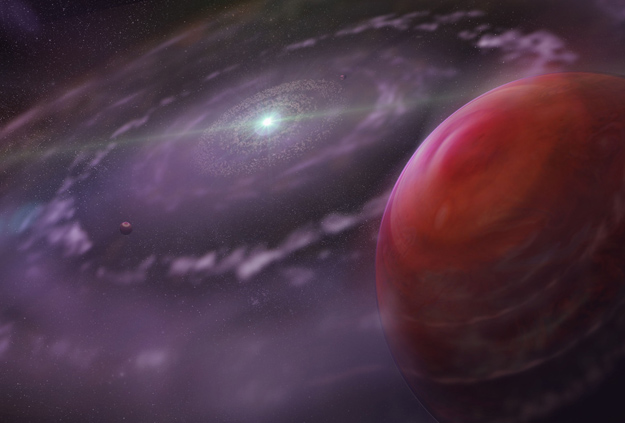 Artist’s rendering of the planetary system HR 8799 at an early stage in its evolution, showing the planet HR 8799c, a disk of gas and dust, and interior planets. Image courtesy of Dunlap Institute for Astronomy & Astrophysics; Mediafarm.

A team of international scientists including a Lawrence Livermore National Laboratory astrophysicist has made the most detailed examination yet of the atmosphere of a Jupiter-size like planet beyond our solar system.

The finding provides astrophysicists with additional insight into how planets are formed.

“This is the sharpest spectrum ever obtained of an extrasolar planet,” said co-author Bruce Macintosh, an astronomer at Lawrence Livermore National Laboratory. “This shows the power of directly imaging a planetary system — the exquisite resolution afforded by these new observations has allowed us to really begin to probe planet formation.”

According to lead author Quinn Konopacky, an astronomer with the Dunlap Institute for Astronomy & Astrophysics, University of Toronto and a former LLNL postdoc: “We have been able to observe this planet in unprecedented detail because of Keck Obervatory’s advanced instrumentation, our ground-breaking observing and data processing techniques, and because of the nature of the planetary system.” The paper appears online March 14 in Science Express and in the March 21 edition of the journal, Science.

The team, using the OSIRIS instrument on the Keck II telescope on the summit of Mauna Kea, Hawaii, has uncovered the chemical fingerprints of specific molecules, revealing a cloudy atmosphere containing water vapor and carbon monoxide. “With this level of detail,” says co-author Travis Barman, an astronomer at the Lowell Observatory, “we can compare the amount of carbon to the amount of oxygen present in the atmosphere, and this chemical mix provides clues as to how the planetary system formed.”

There has been uncertainty about how planets in other solar systems formed, with two leading models, called core accretion and gravitational instability. When stars form, they are surrounded by a planet-forming disk. In the first scenario, planets form gradually as solid cores slowly grow big enough to start absorbing gas from the disk. In the latter, planets form almost instantly as parts of the disk collapses on itself. Planetary properties, such as the composition of a planet’s atmosphere, are clues as to whether a system formed according to one model or the other. 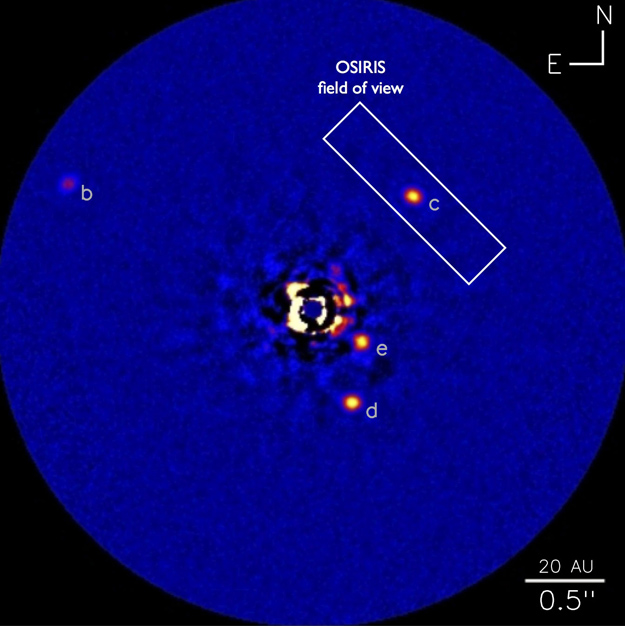 One of the discovery images of the system obtained at the Keck II telescope using the adaptive optics system and NIRC2 Near-Infrared Imager. The rectangle indicates the field-of-view of the OSIRIS instrument for planet C, Image courtesy of NRC-HIA, C. Marois and Keck Observatory.

Although the planet’s atmosphere shows clear evidence of water vapor, that signature is weaker than would be expected if the planet shared the composition of its parent star. Instead, the planet has a high ratio of carbon to oxygen — a fingerprint of its formation in the gaseous disk tens of millions of years ago. As the gas cooled with time, grains of water ice form, depleting the remaining gas of oxygen. Planetary formation began when ice and solids collected into planetary cores — very similar to how our solar system formed.

“Once the solid cores grew large enough, their gravity quickly attracted surrounding gas to become the massive planets we see today,” said Konopacky. “Since that gas had lost some of its oxygen, the planet ends up with less oxygen and less water than if it had formed through a gravitational instability.”

The planet is one of four gas giants known to orbit a star called HR 8799, 130 light-years from Earth. The authors and their collaborators previously discovered this planet, designated HR 8799c, and its three companions back in 2008 and 2010. Unlike most other planetary systems, whose presence is inferred by their effects on their parent star, the HR8799 planets can be individually seen.

“We can directly image the planets around HR 8799 because they are all large, young, and very far from their parent star. This makes the system an excellent laboratory for studying exoplanet atmospheres,” said coauthor Christian Marois, an astronomer at the National Research Council of Canada and another former LLNL postdoc. “Since its discovery, this system just keeps on surprising us.”

Although the planet does have water vapor, it’s incredibly hostile to life — like Jupiter, it has no solid surface, and it has a temperature of more than a thousand degrees Fahrenheit as it glows with the energy of its original formation. Still, this discovery provides clues as to the possibility of other Earthlike planets in other solar systems. “The fact that the HR 8799 giant planets may have formed the same way our own giant planets did is a good sign — that same process also made the rocky planets close to the sun,” Macintosh said.

The research is funded by Livermore’s Laboratory Directed Research and Development program. LLNL is leading the construction of a new planet-finding instrument for the Gemini South telescope in Chile, known as the Gemini Planet Imager (GPI). Designed from the ground up for exoplanet detection, GPI (and similar new instruments at the Palomar and European Southern Observatories) will be capable of seeing planets that are much older, smaller and fainter than the HR-8799 giants. “GPI is the next big step in this field,” said Macintosh, the principal investigator for the project. “It will be an order of magnitude more sensitive than we are now.”

Simulations predict that a large-scale GPI survey should discover dozens of new exoplanets. By studying planets at different stages of their evolution, the GPI science team will further chip away at the puzzle of how planets form. GPI is currently undergoing final testing at UC Santa Cruz and will ship to Chile later in the year.

The W. M. Keck Observatory operates the largest, most scientifically productive telescopes on Earth. The two, 10-meter optical/infrared telescopes on the summit of Mauna Kea on the Island of Hawaii feature a suite of advanced instruments including imagers, multi-object spectrographs, high-resolution spectrographs, integral-field spectroscopy and a world-leading laser guide star adaptive optics system. The Observatory is a private 501(c) 3 non-profit organization and a scientific partnership of the California Institute of Technology, the University of California and NASA.