Comet
C/2002 C1 (Ikeya-Zhang) displayed its beautiful
coma and tails in the spring sky. Discovered
on February 1st, 2002 by Kaoru
Ikeya and Daqing Zhang, the comet could be
seen with naked eye in March and April 2002.
Reaching its maximum brightness (visual magnitude
of 3) on the end of March, it was the brightest
comet since comet Hale-Bopp in 1997.

Ikeya-Zhang
closest approach to the Sun occurred on March
19, at a distance of 0.507 AU (1 AU = 150
million kilometres). It came near the Earth,
on April 29, at a distance of 0.405 AU. These
close approaches, as well as abundant productions
of dust and gas from its nucleus, were the
reasons for its unusual brightness. With a
revolution period of about 360 years, comet
Ikeya-Zhang certainly visited our environment
many times. Comet Ikeya-Zhang is possibly
the great comet that appeared in 1661 and
was observed by J. Hevelius.

Why
observe water vapour in comets?


Immediately
after its discovery, astronomers carried out
a number of experiments in order to study
dust and gases released by comet Ikeya-Zhang’s
nucleus. Comets indeed provide valuable information
about the origin and the formation of the
Solar System. Mainly made of water (for 80%),
cometary ices contain various other molecules
that are relics of the primitive nebula at
the epoch of formation of planetesimals. Our
present knowledge of comets suggests that
many of these molecules
were produced in the primordial interstellar
cloud, before its collapse gave birth
to the Solar System.


Since
comets are variable objects, measurements
of the chemical composition, based on observation
of species in the comet atmosphere, must be
referred to the water production rate from
the nucleus. Water in the Universe cannot
be easily observed from the ground, because
of the water in the terrestrial atmosphere,
which absorbs radiation from space. Most often,
the water production rate in comets is deduced
from observation of the OH radical. The OH
radical is produced by the dissociation of
the water molecule by solar UV radiation.
The observation of OH
lines at 18 cm in comets is one of the
key programmes of the Nançay radio telescope.


Observations
by the Odin
spacecraft


The
Odin
satellite is a small spacecraft, orbiting
the Earth, designed and built by Sweden, in
collaboration with Canada, Finland and France.
It was launched in February 2002. Aimed for
studying both the Universe (astronomy) and
the terrestrial atmosphere (aeronomy), it
allows for the observation of a number of
molecular lines, at radio (submillimetre range)
wavelengths, otherwise not accessible from
the ground: in particular the fundamental
water line at 556.9 GHz. The Odin radiometer
includes a 1.1m diameter antenna, several
receivers covering the 480-580 GHz frequency
range and corresponding spectrometers (one
acousto-optical and two auto-correlation spectrometers).
The acousto-optical spectrometer was developed
under the CNES
responsibility by three CNRS laboratories:
the LAS in Marseille, the CESR in Toulouse
and the radio astronomy department (ARPEGES)
of the Paris Observatory. 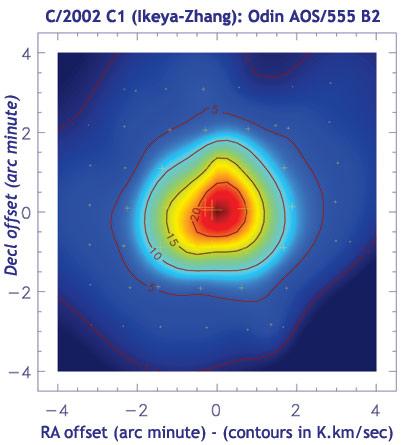 Map
of the brightness distribution in H216O
obtained on April 21 2002.
The beam width is 2 arc
minutes.
The map was obtained in 6 hours integration
time with fifty positions in the sky using
the acousto-optical spectrometer.
The iso-contours correspond to the line intensity
integrated over velocity in K km/s.

The
study of water vapour in comets is one of
the main topics of the Odin observing programme.
The sensitivity of the ODIN radiometer allows
us to detect water in weakly active comets,
and its high spectral resolution capability
(80 m/s by using the auto-correlators) provides
accurate measurement of line profiles. The
first comet detected by Odin was C/2001 A2
(LINEAR), observed from end of April until
July 2001.


Comet
Ikeya-Zhang was observed from April 21 to
29, 2002. First, a detailed mapping of the
water vapour brightness distribution in the
sky was done at 557 GHz. The line intensity
at the centre of the map reached 27 K km/s
on April 21 (integrated signal over the line
profile), then decreased slowly as the comet
moved further away from the Sun. The observations
provide a first estimate of the water production
rate at about 2 1029 molecules/s
(i.e. about six tons per second). The line
profile, very accurately measured, gives information
on the velocity of the water molecules and
on their radiation mechanism. For example,
one could observe that the line is shifted
towards positive speed, due to self- absorption
effects in the cometary atmosphere.

The
strong activity of comet Ikeya Zhang and its
close approach to Earth, allowed to carry
out more challenging observations. Thus, the
isotopic variety H218O
was searched for and finally successfully
detected.


Oxygen
exists under three isotopic, stable varieties:
16O, the most abundant isotope,
17O and 18O. In terrestrial
water (oceans), the ratios H216O/H218O
and H216O/H217O
are 499 and 2681, respectively. The H216O/H218O
ratio could only be measured by the ESA Giotto
spacecraft in comet Halley using mass spectrometers.
For the first time, with Odin, was obtained
a spectroscopic measurement of this ratio.


The
H218O line spectrum,
at 547.7 GHz, was detected in comet Ikeya-Zhang
after 45 hours of Odin observations and an
effective integration time, on the comet,
of 28 hours. The line was observed in parallel
by using two of the four sub-millimetre receivers,
centred at 549 and 555 GHz and tuned at the
line frequency. The receiver outputs were
connected to the high resolution spectrometers
and to the acousto-optical spectrometer. The
integrated signal was, as expected, very weak
(0.24 K km/s). The successful detection demonstrates
the excellent capability of the Odin instrumentation,
regarding the receiver sensitivity and stability,
as well as the spacecraft pointing  accuracy.


The
preliminary measurement of the H216O/H218O
ratio in comet Ikeya-Zhang is in agreement
with that measured in terrestrial oceans (500),
and confirms measurements done in comet Halley.
This result is not surprising. With only a
very few exceptions, all bodies in the Solar
System show a H216O/H218O
ratio similar to the terrestrial one. Differences
by an amount of 5% at maximum can be observed
in some meteorites. Such variations can be
explained by slight differences in nucleo-synthesis
sources producing 16O (mainly supernovae),
nearby the Solar System formation region.