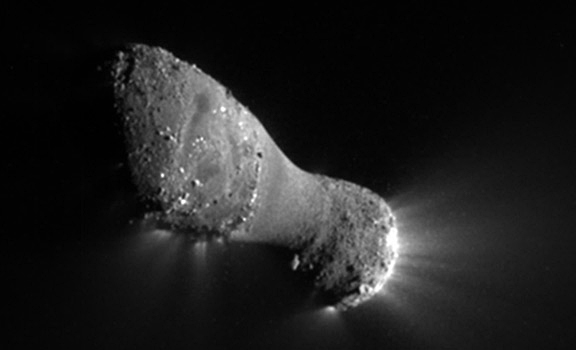 This video clip was compiled from images taken by NASA’s EPOXI mission spacecraft during its flyby of comet Hartley 2 on Nov. 4, 2010. During the encounter, the spacecraft and comet whisked past each other at a speed of 12.3 kilometers per second (27,560 miles per hour). The spacecraft came within about 700 kilometers (435 miles) of the comet’s nucleus at the time of closest approach.

“While future generations should have the opportunity to truly explore comets, this flyby gives us an excellent preview of what they will get to enjoy,” said EPOXI principal investigator Michael A’Hearn of the University of Maryland, College Park. “Hartley 2 exceeded all our expectations in not only scientific value but in its stark majestic beauty.”

The video clip of the flyby is comprised of 40 frames taken from the spacecraft’s Medium-Resolution Instrument during the encounter. The first image was taken at about 37 minutes before the time of closest approach at a distance of about 27,350 kilometers (17,000 miles). The last image was taken 30 minutes after closest approach at a distance of 22,200 kilometers (13,800 miles). The spacecraft was able to image nearly 50 percent of the comet’s illuminated surface in detail.

EPOXI is an extended mission that utilizes the already “in flight” Deep Impact spacecraft to explore distinct celestial targets of opportunity. The name EPOXI itself is a combination of the names for the two extended mission components: the extrasolar planet observations, called Extrasolar Planet Observations and Characterization (EPOCh), and the flyby of comet Hartley 2, called the Deep Impact Extended Investigation (DIXI). The spacecraft will continue to be referred to as “Deep Impact.”
NASA’s Jet Propulsion Laboratory, Pasadena, Calif., manages the EPOXI mission for NASA’s Science Mission Directorate, Washington. The University of Maryland, College Park, is home to the mission’s principal investigator, Michael A’Hearn. Drake Deming of NASA’s Goddard Space Flight Center, Greenbelt, Md., is the science lead for the mission’s extrasolar planet observations. The spacecraft was built for NASA by Ball Aerospace & Technologies Corp., Boulder, Colo.
For more information about EPOXI visit http://epoxi.umd.edu/.