Peter Rejcek, Antarctic Sun Editor: The South Pole has become the place to be for scientists searching for high-energy neutrinos or to understand the nature of the dark energy that is pushing the universe apart — some of the grandest mysteries about the universe.

But the Pole may offer an ideal vantage point for a different study of the cosmos. Anna Moore and her colleagues would like to get a better look at the “cosmic web” of material that permeates the universe, made up of long, narrow filaments of galaxies and intergalactic gases separated by enormous voids.

“We know it’s there. We just can’t see it at the moment without dedicated, specialized experiments. It will be very exciting if we can do it at the South Pole,” said Moore, an astronomer and instrument designer at the California Institute of Technology .

By gathering information about light from distant objects as it passes through the cosmic web, researchers can gather clues about the gases that formed after the Big Bang, such as their distribution, and new information about the evolution of matter over billions of years. But first Moore and her team have to find out whether or not South Pole is the right place to put a two-meter telescope for such an experiment. That’s where the Gattini camera comes in.

The Gattini is a type of small, digital camera with a fish-eye lens capable of capturing wide-field pictures of the winter night sky. It operates in the visible light spectrum — its images will be “quite beautiful” and recognizable to the human eye — but with filters that allow in only the “bluest” wavelengths. 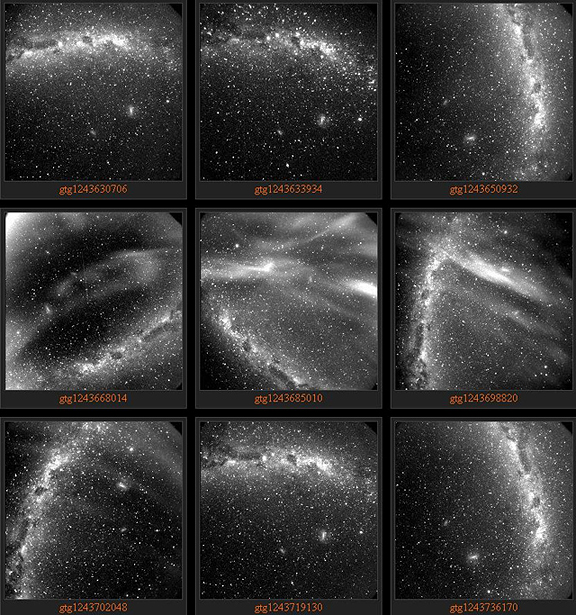 Photo Credit: Michael Ashley and Daniel Luong-Van/University of New South Wales Sky images taken by a Gattini camera at Dome A on the Antarctic polar plateau. Anna Moore and colleagues will install a similar camera at the South Pole this season to determine if it would be an ideal spot to locate a telescope capable of looking for the cosmic web that permeates the universe.

“It’s really a site testing experiment … but it could lead to some very interesting data and some future experiments. That’s why we’re very keen about it,” Moore said, referring to the two-meter telescope, dubbed the Antarctic Cosmic Web Imager, an instrument designed to image the faint cosmic web.

Moore said she and her colleagues, including co-principal investigator Christopher Martin, also at Caltech, believe South Pole is an ideal place for ground-based observations of the cosmic web because of its “stable” night sky background, courtesy of the consistent, cold atmosphere that doesn’t exist at lower latitudes.

To detect very large, distant and therefore faint objects in the night sky, what scientists refer to as “extended,” it’s necessary to “subtract” the bright sky background as much as possible. Moore likened the process to sitting in a brightly lit stadium and trying to see past those lights to the twinkle of stars beyond.

“It’s very difficult to do from temperate locations. You have a lot of different variables,” she explained. “We’re hoping we’ll be able to do sky subtraction [at South Pole] to a level that you can’t do anywhere else.”

Moore is running similar experiments with Gattini cameras at Domes C and A in East Antarctica, high-plateau areas like the South Pole that have similar advantages for observations deep into the universe. In fact, both sites boast less cloud cover than the South Pole, which clouds over about 50 percent of the time during the winter, according to Moore.

“The atmosphere is very stable, and I think we can do a lot of good niche, optical science at both of these sites,” she said of Domes C and A.

A joint French-Italian research station, Concordia Station, sits at Dome C, while an international team of scientists, led by China, has set up a robotic observatory, PLATO (PLATeau Observatory) at Dome A that runs a variety of experiments. The National Science Foundation (NSF) , which manages the U.S. Antarctic Program (USAP) , supports the latter program by providing Iridium satellite communications, as well as funding several first-light site-testing instruments.

Despite the better cloud statistics at Domes C and A, Moore said her team prefers the South Pole location for their proposed cosmic web experiment.

“One reason we want to go to South Pole is because it has the infrastructure to take larger experiments there in the future,” she said. “So, even though it might take twice as long to do the experiment, it’s still a good idea to go to South Pole in the first place because they have such a wonderful logistical system behind it.”

The NSF recently completed construction of a new, 150-person research station at the Pole. Two large, ongoing experiments include the South Pole Telescope , which sports a massive 10-meter-wide dish, and the IceCube Neutrino Observatory , a “telescope” consisting of hundreds of orb-shaped detectors buried in a cubic kilometer of ice.

In that context, the Gattini camera site test is a small experiment, but with big possibilities. Moore and Martin hope to head south this upcoming field season to install the camera, likely in the roof of the Martin A. Pomerantz Observatory (MAPO), a separate building from the main research station that is located in the “dark sector,” an area free of any light pollution during the winter. The camera will sit in a heated enclosure and stare at the night sky through a transparent dome, snapping pictures about every five minutes. A cable connects the camera to a computer inside the lab. “It’s a pretty simple set up,” Moore said.

The images will give the scientists a good idea of the brightness of the sky in the blue bands of light they are targeting.

“We’re trying to do something that hasn’t been done before,” Moore said. “We think it has a lot of applications, not just for astronomy, but for other people as well.”

She said atmospheric scientists, for instance, would be particularly interested in the aurora data. However, if the auroras — beautiful light shows created through the interaction of solar wind and the Earth’s magnetic field — prove to be too frequent, that would possibly be a deal breaker for using the Antarctic Cosmic Web Imager.

But at this point, the sky’s the limit for the project.

“NSF is always looking for new applications for the South Pole site,” Moore said. “We’re really hoping this can be one of them.”