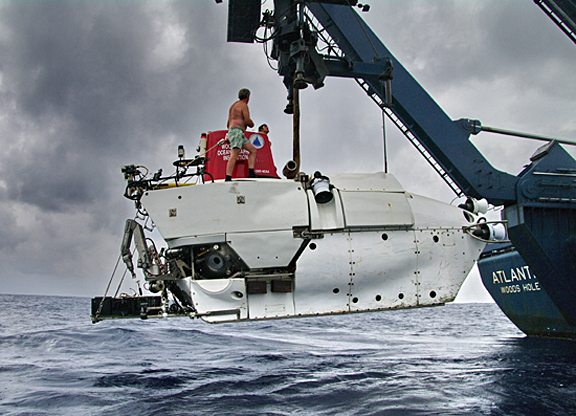 For more than four decades, scientists have foregone a few creature comforts for a first-hand look at the ocean’s depths. On a typical dive in the storied research submersible Alvin, a pilot and two scientists climb through a narrow hatch into an equipment-filled, 6-foot-diameter titanium sphere. Once sealed inside, they have no room to stand up, no seats, and no bathroom. For up to eight hours, they sit on thin pads on the floor and peer out windows, or viewports, the size of teacup saucers. The pilot drives while perched on a small metal box.

But on Dec. 14, Alvin – whose most famous exploits include locating a lost hydrogen bomb in the Mediterranean Sea in 1966, exploring the first known hydrothermal vent sites in the 1970s, and surveying the wreck of RMS Titanic in 1986 – completed its final dive before a long-anticipated, transformative overhaul.

Beginning in 2011, Alvin will undergo the first stage of a multimillion-dollar upgrade funded by the National Science Foundation. After years of planning and designing, the upgrade constitutes great improvements to the sub’s capabilities and its value to the U.S. scientific community.

“The deep-ocean and seafloor beyond 4,500 meters water depth is this planet’s last frontier. A critical asset in this exploration is a more capable human occupied vehicle,” said Dr. Susan Humphris, the principal investigator on the upgrade project and a geologist with Woods Hole Oceanographic Institution (WHOI), which operates Alvin for the U.S. oceanographic community. “Those capabilities will be achieved through a two-stage upgrade of the current Alvin that will ultimately allow the sub to stay down longer – up to 12 hours – and dive to 6,500 rather than 4,500 meters.” During Stage 1, a new personnel sphere with improved ergonomics will be integrated into Alvin’s modified frame, and other improvements made to provide:

* Increased fields of view (with five viewports instead of three, and complete overlap with the pilot’s field of view)
* Improved illumination and imaging systems
* Improved data collection, logging, and interface capability
* Increased payload for Alvin’s basket for carrying samples and equipment.

As funding becomes available and as lithium ion battery technology matures, the changes necessary to increase the working time and extend the depth rating of the submarine will be completed. Since it was put into service in 1964, Alvin has made more than 4,600 dives, playing a major role in important discoveries about the biological, chemical, and geological processes that shape our planet. Its personnel sphere was last upgraded in 1974, when a titanium sphere replaced Alvin’s steel sphere, extending its diving capacity and ultimately enabling firsthand observations of mid-ocean ridges.

The new 6,500 meter-depth-rated sphere is the biggest technical challenge of the Alvin upgrade project. It must be able to withstand immense pressure – about 650 times that felt on the surface of the Earth. The sphere, which is close to completion, has 3-inch thick titanium walls and tests have shown it is an almost perfect sphere. Its interior volume has been increased by nearly 20 percent and has been redesigned – with input from more than 110 biologists, geologists, microbiologists, geochemists, and engineers – for greater scientific efficiency and a bit more comfort. Instead of crouching on the floor of the sphere, scientists will now have adjustable benches giving observers the option of sitting, kneeling, or lying flat. And rather than just three viewports, the new sphere has five larger viewports, with overlapping fields of view enabling better observations, communication and coordination among those in the sub.

“Alvin has served our community for over 40 years. In that time, this submarine has logged more dives than any other comparable vehicle,” said Peter Girguis, a Harvard University professor of Biology who chairs Alvin’s oversight committee, called the Deep Submergence Science Committee (DESCC). “Going to the deep ocean is in many ways more challenging than going into space, and Alvin has lived up to the promise of being able to consistently and safely explore the deep ocean. It’s gratifying that the core values that made the current Alvin a success – namely that safety and simplicity are paramount to insuring uninterrupted, effective exploration – are being incorporated into this new vehicle. It is my hope that the Alvin upgrade sets new standards in safety, reliability and comfort, and that it continues to lead the way in ocean exploration.”

The Woods Hole Oceanographic Institution is a private, independent organization in Falmouth, Mass., dedicated to marine research, engineering, and higher education. Established in 1930 on a recommendation from the National Academy of Sciences, its primary mission is to understand the ocean and its interaction with the Earth as a whole, and to communicate a basic understanding of the ocean’s role in the changing global environment.