By SpaceRef Editor
September 8, 2010
Filed under Deep Impact, University of Maryland, US 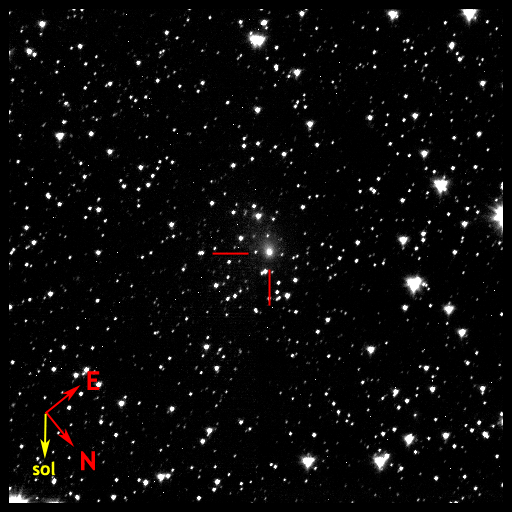 Some five years after its July 4th 2005 ‘comet shot’ was seen around the world, the Deep Impact spacecraft has begun regular imaging of a second comet target, Hartley 2. The spacecraft will continue imaging Hartley 2 during and after its closest approach on November 4, providing an extended look at the comet. However, there won’t be any fireworks this time as the Deep Impact’s secondary probe craft was destroyed in its deliberate 2005 collision with comet Tempel 1.

The flyby of comet Hartley 2 is the second leg of the Deep Impact spacecraft’s two part extended mission known as EPOXI. During the flyby of Hartley 2, the University of Maryland-led science team will study the comet using all three of the spacecraft’s instruments — two telescopes with digital color cameras and an infrared spectrometer.

“These first images mark the beginning of the EPOXI mission’s encounter campaign and the beginning of the Deep Impact spacecraft’s stretch run toward Hartley 2,” said University of Maryland astronomer Michael A’Hearn, principal investigator for the EPOXI mission and its predecessor mission, Deep Impact. “From here on, we expect to get better and better observations of the comet, culminating in images and data taken in the days just before and just after the November 4th flyby.”

The imaging campaign, together with spectra and other data obtained from the spacecraft, will afford the mission’s science team with the best extended view of a comet during its pass through the inner-solar system in history. With the exception of one, six-day break to calibrate instruments and perform a trajectory correction maneuver, the spacecraft will continuously monitor Hartley 2’s gas and dust output for the next 79 days.

“Previous missions to comets, including Deep Impact, have shown us comets that seem to be very different. However, we hope data from the Deep Impact spacecraft’s flyby of Hartley 2, which has a much smaller nucleus than the previously visited comets, will help us to understand why they appear so different. said A’Hearn, who won the 2008 American Institute of Aeronautics and Astronautics Space Science Award for his leadership of the spacecraft’s Deep Impact mission to comet Tempel 1. A’Hearn also won the 2008 Kuiper astronomy prize for seminal contributions over his career to the study of comets, prominently including the Deep Impact mission. “The next cometary missions, Stardust NExT and ESA’s Rosetta mission, will lead to additional breakthroughs in understanding what comets can tell us about the formation of the solar system,” said A’Hearn.

EPOXI is an extended mission that used the already “in flight” Deep Impact spacecraft to explore distinct celestial targets of opportunity prior to it heading for comet Hartley 2. The name EPOXI is a combination of the names for the two extended mission components: the extrasolar planet observations, called Extrasolar Planet Observations and Characterization (EPOCh), and the flyby of comet Hartley 2, called the Deep Impact Extended Investigation (DIXI). Note — while the mission name has been changed to EPOXI the spacecraft will continue to be referred to as “Deep Impact.”