By SpaceRef Editor
January 29, 2015
Filed under Education, University of New Hampshire, US 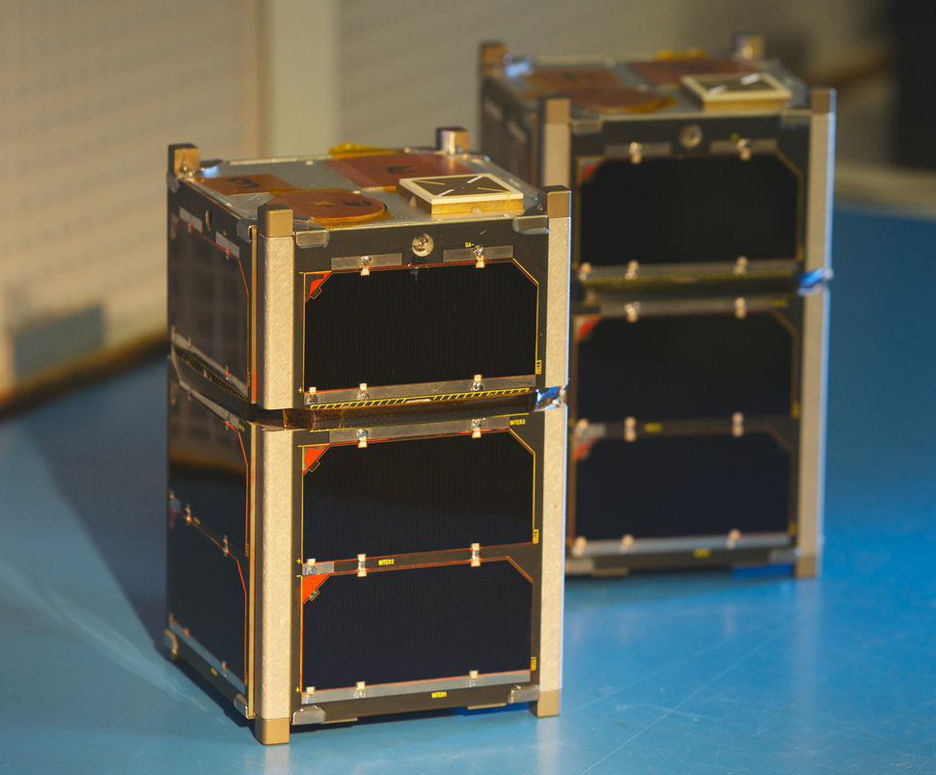 Twin, pintsized satellites built in part at the University of New Hampshire’s Space Science Center will be launched into orbit from Vandenberg Air Force Base in California at 9:20 a.m. (EST) Thursday, January 29, 2015.

That process, known as microbursts, involves electrons moving at nearly the speed of light during short-duration (100 milliseconds) events. Microbursts are thought to be one of the primary mechanisms by which the outer radiation belt loses energetic particles to Earth’s atmosphere after the occurrence of powerful solar storms. Such storms can dramatically change the intensity of the radiation belts and thereby pose hazards to space-based technology.

“We care about this because the belts’ high-energy particles, particularly the electrons, pose a real risk to spacecraft,” says Harlan Spence, UNH principal investigator for the FIREBIRD II mission. “So if we understand these physical processes better, we’ll be able to predict how the radiation belts will behave and both protect the satellites we depend upon for telecommunications, weather monitoring and prediction, etcetera, and design them to withstand this high-energy radiation.”

FIREBIRD II is a follow-on to the inaugural 2013 FIREBIRD mission, which according to Spence provided the best quality microburst data of its kind to date “despite the size of the spacecraft.”

With improvements made in the wake of the first mission, including more robust software and power systems, FIREBIRD II is anticipated to provide the very first characterization of the spatial scale of microbursts, without which scientists won’t fully understand the global consequences of the loss of energetic particles to Earth’s atmosphere.

Moreover, greatly expanding the science, other measurements will be made in the radiation belt environment by separate missions occurring in tandem with FIREBIRD II, including NASA’s Van Allen Probes mission, on which Spence is a principal investigator, and NASA’s upcoming Magnetospheric Multiscale mission that will carry critical, UNH-built components.

Says Spence, “We are starting to look in the key energy range of interest between what we see with the FIREBIRD nanosatellites and what we see with the Van Allen Probes, and from those comparisons we can start learning about the physics of how particles are lost from the radiation belts to the atmosphere.”

Piggybacking CubeSats on rockets dedicated to larger missions is standard operating procedure for a program designed to put small, low-cost satellites into space much more quickly than typical satellite missions.

Launched by NASA through the CubeSat Launch Initiative’s Educational Launch of Nanoatellites Program, the little satellites are placed into a compartment known as a Poly Picosatellite Orbital Deployer, P-POD for short, and jettisoned from the rocket at the proper orbital height above Earth. The FIREBIRD II CubeSats will be the first to be deployed and will turn on sixty minutes later to begin data transmission.

The program is providing students and young professionals with the opportunity to participate as never before in satellite missions end-to-end. UNH alumnus Alex Crew ’14G, now a postdoctoral researcher at Stanford University, did the bulk of his doctoral work designing and implementing the science operations plan for the FIREBIRD mission and will be involved in the science operations and science data analysis for FIREBIRD II.

For more information on the FIREBIRD II mission, visit: http://firebird.unh.edu.