By SpaceRef Editor
April 3, 2013
Filed under University of Tennessee, Knoxville, US 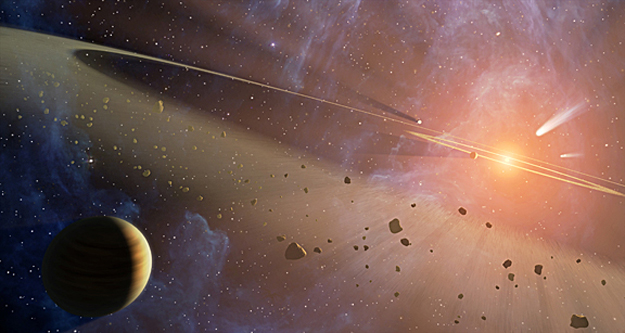 Many newly formed stars are surrounded by what are called protoplanetary disks, swirling masses of warm dust and gas that can constitute the core of a developing solar system. Proof of the existence of such disks didn’t come until 1994, when the Hubble telescope examined young stars in the Orion Nebula.

Protoplanetary disks may potentially become celestial bodies such as planets and asteroids. But just how they make that transformation will remain a mystery to science until researchers can get a grasp on the disordered movement, or turbulence, that characterizes the constituent gases of the disks. Turbulence is what some people regard as “the last great classical physics problem.”

“By understanding the nature of the gases, we can learn something about how small particles interact with each other, coagulate to become larger particles and then ultimately form planets,” says Jake Simon of the University of Colorado, principal investigator of a research project currently taking on two primary challenges in the quest to understand protoplanetary disk turbulence.

The first challenge is developing correct models for the simulations. They have not yet been completely worked out and are subject to considerable uncertainty, Simon explains.

“Our numerical simulations oftentimes have to assume a particular model for the structure of the disk — that is, how density and temperature change with distance away from the star,” he says. “We must also make assumptions as to the structure and strength of the magnetic field that is present, and for the ionization structure of the disk, which would entail, for example, finding where in the disk the temperature might be hot enough, or some source of radiation powerful enough, to knock off electrons from molecules and atoms, thus creating ions (positively charged).”

The ionization structure is particularly important, Simon explains, because turbulence will be more vigorous where the disk gas is ionized and seeking the balance of electrons (negatively charged).

The second challenge the team is addressing has to do with a technical issue related to the simulations.

“In a particular region in these disks, the electrons are tied to magnetic fields, while the ions are not. This leads to something called the Hall effect and currently, our numerical algorithms cannot accurately capture the nature of this effect,” he says.

Discovered by American physicist Edwin Hall in 1879, the Hall effect refers to a voltage-difference that occurs across an electrical conductor. The voltage difference is crossways to an electrical current in the conductor and a magnetic field that is perpendicular to the current.

While Simon and his research team are striving to solve the problems that impede progress, they are also experiencing success. One of the accomplishments has involved gaining an understanding of what is known as ambipolar diffusion, in which both the electrons and the positively charged ions in protoplanetary disks are dragged along by a magnetic field. Ambipolar diffusion is important at low gas densities, which occur at large distances from the star, Simon explains.

“If the ions and electrons don’t collide with the neutrals frequently enough, ambipolar diffusion acts to damp out the turbulence,” he says. “The degree to which this happens has been explored with our high-resolution numerical simulations that we have run on the Kraken supercomputer. We believe we now have a much better understanding of how disks behave in their outer regions, far from the central star.”

Simon and his team have used more than 4 million service units (compute hours) on Kraken so far, including an average of approximately 585 cores per run and a single-run high of 18,432 cores. The National Science Foundation’s Extreme Science and Engineering Discovery Environment (known as XSEDE) has provided the compute time allocation for the project on Kraken, one of the most powerful supercomputers in academia. Kraken is housed at Oak Ridge National Laboratory and managed by the University of Tennessee’s National Institute for Computational Sciences.

“In our simulations, we do not need to simulate the entire disk, but only a small patch of it,” he says. “However, this patch does have to be somewhat large and has to have a certain number of resolution points per unit length. This equates to calculations that can be performed only on the largest computers by distributing parts of the calculation across multiple CPUs. Furthermore, we had to run quite a few different simulations to explore different models and magnetic field geometries. With HPC resources like Kraken, we can run several of these high-resolution computer simulations simultaneously. This speeds up our research considerably.”

“Another implication of our research is that the turbulent motion of the gas increases rapidly away from the mid-plane of the disk,” he says. “Methods now exist that can observe how fast these turbulent motions are in real disks. By comparing these current and coming observations with our theoretical predictions, we will be able to verify our understanding of how disk turbulence works.”