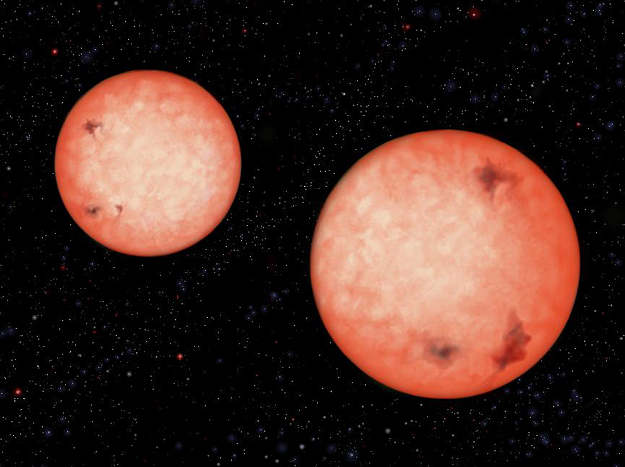 A team of astronomers have used the United Kingdom Infrared Telescope (UKIRT) on Hawaii to discover four pairs of stars that orbit each other in less than 4 hours. Until now it was thought that such close-in binary stars could not exist. The new discoveries come from the telescope’s Wide Field Camera (WFCAM) Transit Survey, and appear in the journal Monthly Notices of the Royal Astronomical Society.

About half of the stars in our Milky Way galaxy are, unlike our Sun, part of a binary system in which two stars orbit each other. Most likely, the stars in these systems were formed close together and have been in orbit around each other from birth onwards. It was always thought that if binary stars form too close to each other, they would quickly merge into one single, bigger star. This was in line with many observations taken over the last three decades showing the abundant population of stellar binaries, but none with orbital periods shorter than 5 hours.

For the first time, the team have investigated binaries of red dwarfs, stars up to ten times smaller and a thousand times less luminous than the Sun. Although they form the most common type of star in the Milky Way, red dwarfs do not show up in normal surveys because of their dimness in visible light.

For the last five years, UKIRT has been monitoring the brightness of hundreds of thousands of stars, including thousands of red dwarfs, in near-infrared light, using its state-of-the-art Wide-Field Camera (WFC). This study of cool stars in the time domain has been a focus of the European (FP7) Initial Training Network ‘Rocky Planets Around Cool Stars’ (RoPACS) which studies planets and cool stars.

“To our complete surprise, we found several red dwarf binaries with orbital periods significantly shorter than the 5 hour cut-off found for Sun-like stars, something previously thought to be impossible”, said Bas Nefs from Leiden Observatory in the Netherlands, and lead author of the paper. “It means that we have to rethink how these close-in binaries form and evolve.”

Since stars shrink in size early in their lifetime, the fact that these very tight binaries exist means that their orbits must also have shrunk as well since their birth, otherwise the stars would have been in contact early on and have merged. However, it is not at all clear how these orbits could have shrunk by so much.

One possible answer to this riddle is that cool stars in binary systems are much more active and violent than previously thought.

It is possible that the magnetic field lines radiating out from the cool star companions get twisted and deformed as they spiral in towards each other, generating the extra activity through stellar wind, explosive flaring and star spots. Powerful magnetic activity could apply the brakes to these spinning stars, slowing them down so that they move closer together.

“Without UKIRT’s superb sensitivity, it wouldn’t have been possible to find these extraordinary pairs of red dwarfs” said David Pinfield. He adds: “The active nature of these stars and their apparently powerful magnetic fields has profound implications for the environments around red dwarfs throughout our galaxy.”

Caption: This artist’s impression shows the tightest of the new record breaking binary systems. Two active M4 type red dwarfs orbit each other every 2.5 hours, as they continue to spiral inwards. Eventually they will coalesce into a single star.

The team publish their work in the paper, “Four ultra-short period eclipsing M-dwarf binaries in the WFCAM Transit Survey”, S. V. Nefs et al, Monthly Notices of the Royal Astronomical Society, in press. A preprint of the paper can be downloaded from http://arxiv.org/abs/1206.1200

With a 3.8 meter diameter mirror, the UK Infrared Telescope (UKIRT,
http://www.jach.hawaii.edu/UKIRT/) is the second largest dedicated infrared telescope in the world. Sited at an altitude of 4200 m on the top of the volcano Mauna Kea on the island of Hawaii, it began operations in 1979. UKIRT is carrying out the UKIRT Deep Sky Survey (UKIDSS, http://www.ukidss.org/) searching for objects from nearby brown dwarfs to distant quasars. In 2012 the UKIDSS team received the RAS Group Award.

The Royal Astronomical Society (RAS, http://www.ras.org.uk), founded in 1820, encourages and promotes the study of astronomy, solar-system science, geophysics and closely related branches of science. The RAS organizes scientific meetings, publishes international research and review journals, recognizes outstanding achievements by the award of medals and prizes, maintains an extensive library, supports education through grants and outreach activities and represents UK astronomy nationally and internationally. Its more than 3,500 members (Fellows), a third based overseas, include scientific researchers in universities, observatories and laboratories as well as historians of astronomy and others.