By SpaceRef Editor
June 13, 2001
Filed under Mars Global Surveyor, University of Arizona, US

New high-resolution images from the Mars Orbiter Camera (MOC) show evidence
of ground ice on Mars as recently as 10 million years ago.

More striking is that the signs of geologically recent ground ice deposits
are near Mars’ equator, where ice was probably no deeper than 5 meters (15
feet) below the surface, University of Arizona scientists say.

“If ground ice was present within 5 meters of the surface only a few million
years ago, it is very likely to persist today within about the upper 10
meters,” said UA planetary sciences Professor Alfred S. McEwen. “This is
especially interesting because it is an equatorial region of Mars, more
accessible to exploration.”

Peter D. Lanagan, McEwen and Laszlo P. Keszthelyi of the UA Lunar and
Planetary Laboratory, and Thorvaldur Thordarson of the University of Hawaii
have discovered clusters of tens to many hundreds of small “rootless” cones
in MOC images of the Cerberus plains, Marte Valles, and Amazonis Planitia
region near Mars’ equator.

The martian cones are similar both in morphology and size to rootless cones
in Iceland, features which form when surface lava interacts explosively with
near-surface groundwater.

“The martian cones sit on pristine lava surfaces, and the cones are
generally close to fluvial (water-carved) channels. The lavas do not appear
to have been modified since they were emplaced, and some of the channels
appear to be similarly pristine,” Lanagan said.

Using crater counts and other geologic evidence seen in the detailed new MOC
images, William K. Hartmann of the Planetary Science Institute in Tucson and
others recently determined these lava flows to be as young as 10 million
years. 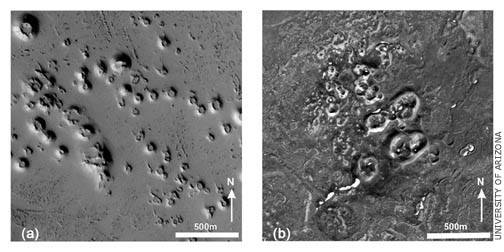 “We consider recent fluvial recharge to be the most likely origin for the
shallow ground ice,” the UA/Hawaii team conclude this week in Geophysical
Research Letters. “If shallow ground ice in these regions was present less
than 10 million years ago, deposits of shallow ground ice probably persist
in the vicinity of the cone fields to the present day.”

Rootless cones, or pseudocraters, do not form over volcanic vents.

Thordarson concludes from years of fieldwork that in Iceland, rootless cones
form where molten lava flows over marshy terrain. A crust forms over the
lava flow, while molten lava continues to pump through tubes or pathways
beneath the crust. As lava is shoved through the tubes, it mixes with some
of the underlying water-rich sediment, and in the process of mixing, the
water is heated by lava until it flashes to steam. When the steam pressure
exceeds the pressure of the lava above it, there’s a “phreatomagmatic” — or
groundwater and magma — explosion. The result of several such sustained
explosions is a cluster of cones associated not with any deep fault or
fissure but with a network of lava tubes over the marshy area.

“We see many hundreds of similar cones in the Mars scape, and they appear to
be associated either with low plains areas or with recent outflow channels,”
Lanagan said. Water would flow to low areas, pond and percolate in low
plains during the floods, recharging ground ice.

“If the terrestrial rootless cone analogy is extended to Mars,” he added,
“lava flows erupted over surfaces with ground ice — probably at a depth of
less than 5 meters — where they melted the ice to form a water-rich slurry
which mixed with the tube-fed lavas. The process likely would have resulted
in a series of phreatomagmatic explosions, which formed cones on the top of
the chilled lava crust.

“The martian cones are close to outflow channels, so the cones formed in
regions that were probably water- or ice-rich. Also, the martian cones
generally are seen to sit on platy-ridged lavas similar to Icelandic ‘rubbly
pahoehoe’ lava flows, where lavas delivered through tube networks breaks the
hardened, chilled crust of the flow and move the resulting pieces around
like a pulled-apart jigsaw puzzle. This suggests that the martian cones
formed over lava flows fed by lava tubes, similar to rootless cones in
Iceland.”

Researchers debate whether the shallow ground ice that exploded to create
the cones is relic ice leftover from the planet’s formation, recondensed
water vapor from the soil-atmosphere water vapor exchange, or recharge from
surface flooding events.

“It is unlikely that relic ground ice has survived for 4 billion years in
equatorial regions of Mars,” the UA/Hawaii team concludes.

The argument that equatorial ground ice could be recharged by an exchange of
water vapor between the ground and the atmosphere — as Arizona State
University scientists have modeled — is perhaps more plausible, the team
wrote.

“However, because these cones appear to be near outflow channels, we think
that the water the formed the cones is probably recharge from floods,”
Lanagan said.

Scientists studying Viking imagery in the late 1970s and 1980s noted
structures they interpreted to be rootless cones. Most of these were twice
the size of the largest terrestrial cones, however, and it was unclear if
some of these rested on actual volcanic surfaces.

The UA researchers looked at some of these areas again, this time using
high-resolution MOC images, but still could not tell if the cones sit on
volcanic surface because the terrain is either heavily mantled by dust or
significantly eroded, Lanagan said.

“The structures observed by MOC are the first clearly identified martian
cones having dimensions, morphologies, and geologic settings similar to
terrestrial rootless cones,” the team wrote in GRL.

Copies of the figures published in the GRL article, “Rootless cones on Mars
indicating the presence of shallow equatorial ground ice in recent times”
are available from the website

Addresses for jpgs and tiffs of the figures are as follows: