Two Comets to Glow in the Spring Sky

By SpaceRef Editor
April 27, 2004
Filed under Astrophysics, Sky and Telescope, US

Seven years have passed since Comet Hale-Bopp graced the evening sky in the
spring of 1997. Now not just one but two new comets are heading into
springtime view — though they won’t come near Hale-Bopp for brightness and
grandeur. In fact, no one yet knows whether they’ll reach naked-eye
visibility for most people in North America and Europe. But even if they
don’t, anyone should be able to catch them with binoculars.

But you’ll have to know when and where to look. SKY & TELESCOPE magazine
provides complete instructions. SKY & TELESCOPE’s editors are tracking the
comets’ brightnesses and will post updates on the magazine’s Web site,
SkyandTelescope.com, in the coming weeks so that no one need miss this
spring’s comet show.

Here is an overview of what to expect.

The two arriving visitors are named Comet LINEAR and Comet NEAT, after the
search programs that found them (Lincoln Near-Earth Asteroid Research,
which uses a pair of telescopes in New Mexico, and the Near-Earth Asteroid
Tracking program, which uses telescopes in California and Hawaii). Right
now, Comet LINEAR is hard find to in the bright glow of dawn just above the
eastern horizon before sunrise, and Comet NEAT is visible only from the
Southern Hemisphere. But that will soon change.

For now, in the final week of April and the first few days of May, North
American and European skywatchers do have a shot at spotting Comet LINEAR
before dawn on clear mornings. Scan with binoculars just above the horizon
due east about 60 minutes before your local time of sunrise.

(There’s a chance that observers may detect another comet, Comet Bradfield,
somewhat to the left of LINEAR on April 24th and for the next few mornings.
But the chances for this one are slimmer.)

In subsequent weeks both LINEAR and NEAT will come into in the evening sky,
where they’ll be in more convenient view.

Starting around May 5th or 6th, scan for Comet NEAT just above the
southwest horizon as evening twilight fades. You’re looking for a small,
fuzzy “star” with a small tail pointing to the upper left. (The much
brighter star Sirius will also be low in the southwest; on May 5th the
comet will be not far to its left, and on May 6th the comet will be to
Sirius’s upper left.) In the next two weeks Comet NEAT will get much higher
in the southwest at nightfall, though it will also fade. Binocular users
may be able to follow it through the end of May.

Around May 26th or 28th, Comet LINEAR could steal the show when it too
enters the evening sky. Look for it just above the west-southwest horizon
as twilight fades. It will get only a little higher in the following week
or two, while fading rapidly.

Full details, including charts showing when and where to look for both
comets (from the Southern Hemisphere too!) appear in the May 2004 issue of
SKY & TELESCOPE and in the article “The Double Comet Show of 2004,” online at 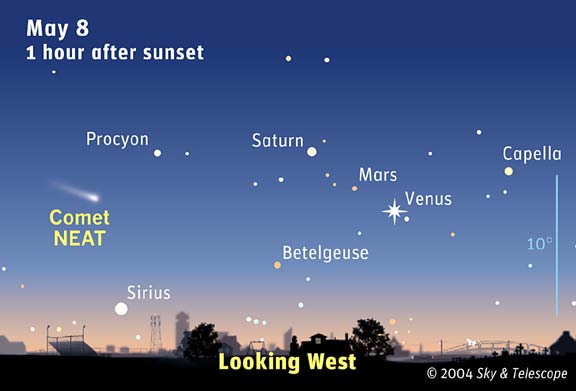 About an hour after sunset on May 8, 2004, Comet NEAT should be fairly easy to spot above the southwestern horizon. Use binoculars if you can’t pick it out by eye. The comet will be easier to spot from locations far from city lights. Venus gleams brightly far to the comet’s right, and below it (near the horizon) is the bright star Sirius. Seen through binoculars or a small telescope, the bright head of Comet NEAT may show delicate arcs and streamers. Click on the image to download a publication-quality version (128-kilobyte JPEG) by anonymous FTP. Sky & Telescope illustration. 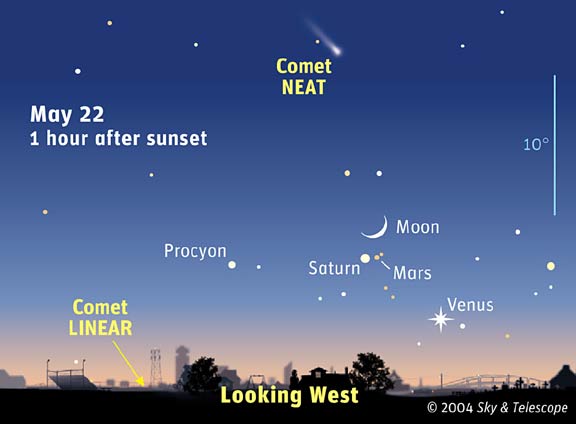 About an hour after sunset on May 22, 2004, the evening sky presents a fantastic array of sights! Over the past two weeks Comet NEAT has climbed much higher, and its tail (which points away from the Sun) may be distinctly visible in a dark sky. You’ll find a thin crescent Moon just above Saturn and Mars, with brilliant Venus to their lower right and Jupiter (not shown) high up to the comet’s left. Those south of latitude 35° may spot the head of Comet LINEAR just as it sets in the southwest. Click on the image to download a publication-quality version (128-kilobyte JPEG) by anonymous FTP. Sky & Telescope illustration. 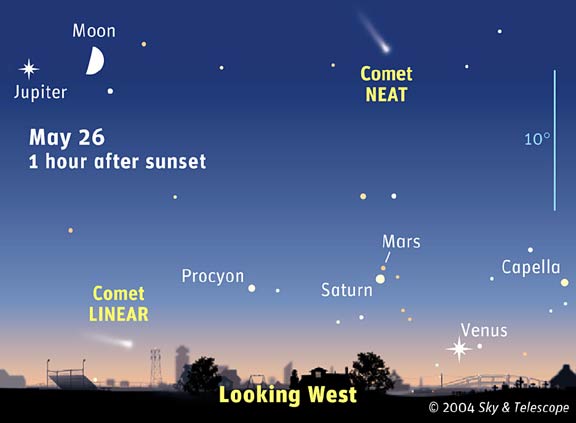 By May 26, 2004, Comet LINEAR has risen into the southwestern sky at dusk — find a clear horizon and look for it about an hour after sunset. Use binoculars because the comet may be faint and hard to see by eye. Meanwhile, Comet NEAT has climbed a bit higher and may look slightly fainter than it did four nights ago. While it’s still twilight (or if you have lots of light pollution) the comets’ tails won’t look as long as they will in a clear, completely dark sky. Which comet looks brighter? Click on the image to download a publication-quality version (133-kilobyte JPEG) by anonymous FTP. Sky & Telescope illustration. 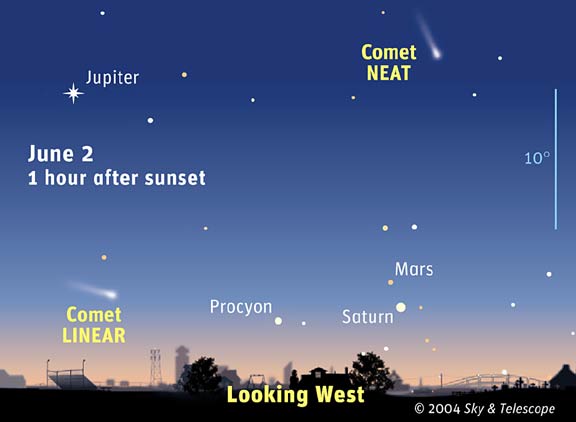 By June 2, 2004, both Comet NEAT and Comet LINEAR are fading noticeably as they move farther from the Sun and Earth. Within a few days both will be more than 100 million miles away from us. Even though they’re both well up in the sky when twilight ends, the comets may be difficult to spot because of strong moonlight. But after June 3rd the Moon won’t rise until late evening, and you may still be able to spot Comets NEAT and LINEAR — by eye or using binoculars — for a couple more weeks. Click on the image to download a publication-quality version (121-kilobyte JPEG) by anonymous FTP. Sky & Telescope illustration.