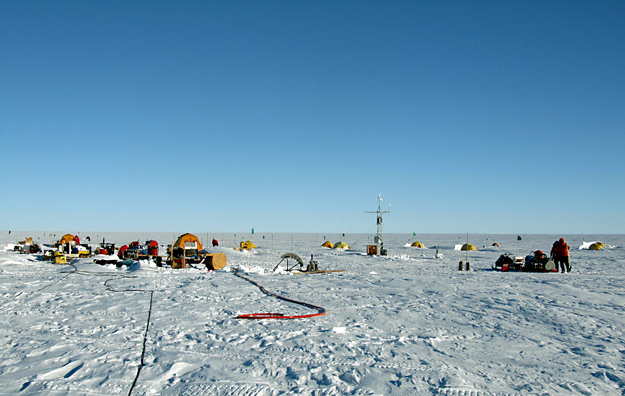 A trio of very large-scale, National Science Foundation-funded Antarctic science projects–investigating scientifically significant subjects as varied as life in extreme ecosystems, the fate of one of the world’s largest ice sheets and the nature of abrupt global climate-change events–have recently each reached important technological milestones that will advance cutting-edge research.

In the past week, researchers with the West Antarctic Ice Sheet Divide (WAIS) project, the Whillans Ice Stream Subglacial Access Research Drilling (WISSARD) project and the Pine Island Glacier (PIG) project each announced they had achieved these various milestones. In each case, the successes were based on innovative drilling technologies and promise to open new scientific vistas for Antarctic research.

All three projects are supported by the NSF-managed U.S. Antarctic Program (USAP). Through the USAP, NSF coordinates all U.S. scientific research and related logistical support on the southernmost continent and in the surrounding Southern Ocean.

“Although additional challenges doubtless lie ahead for these projects in the harsh Antarctic environment, these successes are a testament to both scientific and engineering ingenuity and the logistical support needed to mount such ambitious and scientifically promising programs,” said Scott Borg, who heads Antarctic Sciences in NSF’s Office of Polar Programs.

On December 17, researchers with the PIG project announced that they had successfully drilled through the remote Pine Island Glacier ice shelf.

The successful drilling will help to reach the project’s ultimate objective: to study the physical processes that are causing a rapid melting of the 60-kilometer-long (37 miles) ice shelf that extends into Pine Island Bay. One cause is suspected to be the circulation of relatively warmer ocean waters under the floating ice shelf that are undercutting the shelf.

Results from PIG will be used to improve the physics of numerical models that are used to predict future melt rates of the massive West Antarctic Ice Sheet. Increased melting of the ice sheet could contribute significantly to global sea-level rise, with wide-ranging consequences for the Earth’s temperate regions.

The stability of the polar ice sheets and their reaction to rising global temperatures remain one of the variables in the models used to predict climate trends. Analysis of satellite imagery and altimetry has shown that this part of the West Antarctic Ice Sheet has the highest thinning rates in Antarctica.

PIG is also funded by the National Aeronautics and Space Administration (NASA) and includes collaborating scientists from the British Antarctic Survey (BAS). High-resolution imagery analyzed by NASA Emeritus and project lead scientist Bob Bindschadler was used to locate a suitable site for the PIG camp on the ice.

The international PIG project is comprised of scientists and engineers with specialized expertise in analyzing satellite imagery deploying the hot-water drill; seismic and radar surveys of the ice shelf; and sea-bed structure and development and deployment of custom-built ocean instrumentation that will be left in the ocean cavity below the ice shelf to measure circulation and ocean-ice interactions over the coming years.

The PIG team faces the challenges of working not only in one of the most remote areas of the continent but also on a heavily crevassed region of the ice shelf where ice-sheet and weather conditions make it extremely difficult to deploy the personnel needed to conduct science, particularly for a large-scale project such as PIG. The project was initially launched as an initiative of the international Polar Year (IPY) 2007-2009 but has had to overcome numerous natural obstacles to deploy this season.

One of the primary tasks for the team has been to use a hot-water drill run by Martin Truffer, of the University of Alaska, Fairbanks, to make two 500-meter-deep (1,600 feet), 20-centimeter-diameter (approximately 8 inches) “skinny holes” through the ice shelf at each measurement site.

Researcher Tim Stanton’s group, at the Naval Postgraduate School, developed specialized long-term instrument systems to fit down the 20-centimeter holes. A surface-powered instrument package lowered through the first bore hole to hang two meters (6.5 feet) below the ice measures the boundary layer currents and rate of mixing of ocean water right below the ice, allowing the local ice-melt to be calculated.

Sridhar Anandakrishnan and Leo Peters, geophysicists with Penn State University, meanwhile, are creating tiny “earthquakes” to study the shape of the ocean cavity and the properties of the bedrock under the PIG ice shelf. Leo and Penn State student Kiya Wilson have been doing seismic measurements around the first and second drill camp sites, then, with helicopter support, they will sample about 40 locations across the ice shelf to determine the larger-scale sea-bed shape and ice-shelf structure.

In the same week, meanwhile, researchers with WISSARD successfully tested a new hot-water drill that they will use to access a subglacial lake for clean microbiological sampling and glaciological measurements. This interdisciplinary project is set to explore a portion of a vast hydrological system that exists under the Antarctic ice.

The team announced earlier this week that a test hole was drilled through the Ross Ice Shelf, a geographical feature the size of the state of Texas, into the seawater cavity below, which is over 900 meters (3000 feet) deep.

Once testing of the hot-water drill and the integrated filtration systems is completed on the ice shelf, all of the drilling equipment–including the drill, specialized filters and electrical generating equipment–will be moved, by means of an over-ice traverse, to the actual research drill site overlying Subglacial Lake Whillans.

Over the last several decades, ground-penetrating radar and other remote-sensing have revealed a vast system of rivers and lakes beneath the miles-thick Antarctic ice sheets. Geothermal heat from below, coupled with the pressure of the ice from above and the insulation provided by the ice sheet, cause some areas at the base of the ice sheet to remain above the freezing point, even in the extreme cold of Antarctica.

In order to explore one of these hydrological systems at the edge of the West Antarctic Ice Sheet on the southeastern edge of the Ross Sea, WISSARD proposes to use a variety of tools and techniques to explore this unique subglacial environment.

WISSARD will lower a variety of sampling tools and sensors into the Subglacial Lake Whillans. These tools will cleanly sample subglacial lake water and sediments, provide video of lake bottom, and characterize chemical and physical properties of the lake and its environs.

The custom-built WISSARD hot-water drill, developed at University of Nebraska – Lincoln under the leadership of Frank Rack, is designed to melt a 30-centimeter (11-inch) hole through 800 meters (2,600 feet) of ice at the actual research site, providing clean access to Subglacial Lake Whillans.

A variety of sophisticated tools will be sent down the borehole to collect data and samples, supported by equipment and laboratories on the surface. All are designed not to contaminate this previously unexplored environment and to maintain the pristine nature of this part of Antarctica.

Researchers with the WAIS Divide project, meanwhile, have announced that an innovative technique, called Replicate Coring, will allow them to retrieve additional ice cores from specific depths in an existing borehole, a development that researcher Charles Bentley, at the NSF-funded Ice Drilling Design and Operations (IDDO) group at the University of Wisconsin said opens “a new door for the future of ice-core drilling.”

The replicate drilling technique is a key advance, because it allows scientists to take samples from specific levels of a main borehole without impeding the hole itself, leaving the main borehole open for future logging of information. Previously, it would have been necessary to physically block off the main borehole to sample along the sides.

NSF supports innovations in ice-core drilling through a cooperative partnership between the Ice Drilling Program Office (IDPO) led by Dartmouth College, in collaboration with the University of New Hampshire and IDDO.

The Replicate Coring technique, which was developed and tested by the IDDO engineers as part of the DISC drill, was put into service at WAIS Divide during the 2007-2008 Antarctic field season. The design of the DISC Drill was started by the Wisconsin group in 2002 in response to the desire of the U.S. researchers for a deep-coring drill that would incorporate the ability to retrieve additional cores from the sides of the main borehole. The DISC drill completed the main WAIS borehole during the 2011-2012 season, reaching a depth of 3,405 meters (more than 11,000 feet). Testing of the replicate coring system at WAIS began at the end of the 2011-2012 season.

Unlike the drilling at PIG and WISSARD, the drilling at WAIS is designed to obtain cores of ice. These cores, or cylinders of ice, contain, frozen within them, samples of gases from the atmosphere as it was, in some cases, hundreds of thousands of years ago.

Previously, ice cores have yielded unexpected scientific discoveries, including, for example, evidence that climate can change abruptly in less than ten years, far less time than previously suspected. Analysis of ice cores also indicates that the level of carbon dioxide, a greenhouse gas, in the atmosphere is presently higher than in the past 800,000 years.

At the WAIS Divide site–an extremely cold area of the West Antarctic Ice Sheet, where the abundant snowfall rarely melts–the ice contains many tens of thousands of years of annual information about past climate. The cores obtained by replicate drilling will allow researchers to obtain samples from specific depths in the ice sheet, including from times of past abrupt climate change, allowing them to better understand how and why abrupt changes occur.