Trial by vacuum brings next Galileo satellites closer to launch 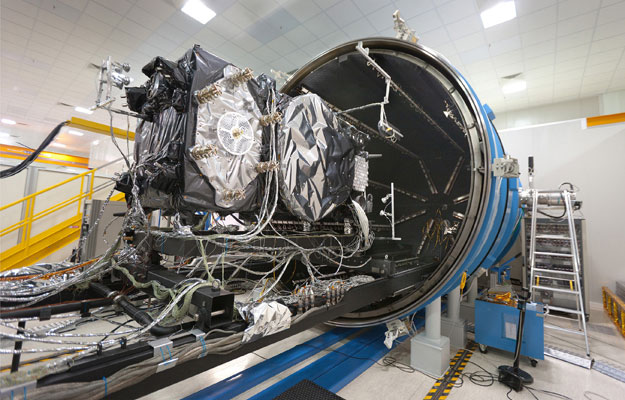 The next two Galileo navigation satellites have now endured the harsh vacuum and temperature extremes of space on the way to their scheduled 28 September launch.

“So we don’t need to carry out full-scale qualification tests because we already know from our in-orbit test campaign that the design performs to our expectations.

“Instead, what we are carrying out is acceptance testing: checking the workmanship, performance and readiness to launch of these new satellites.”

Thermal vacuum testing involves placing each satellite into a vacuum chamber and pumping out all the air. Its external surfaces are then variously heated and cooled while the satellite is operated.

With no air in orbit to moderate temperatures, any part of a satellite in sunlight can become extremely hot, while those parts in shadow or facing deep space grow extremely cold. Critical systems must be kept within a set temperature range, however.

“To give an idea, Galileo’s laser retroreflector on its exterior reached -110*C during the cold phase of testing,” said Guido Barbagallo, Galileo thermal engineer. “Meanwhile, the navigation high-power amplifiers could be driven to more than +40*C during the hot phase.”

Like most satellites, Galileo’s uses a variety of methods to maintain its temperature range, including multi-layer insulation, heaters, heat pipes relying on evaporating ammonia to shift heat, and radiators to dump waste heat out to space.

Galileo’s passive hydrogen maser atomic clock at the heart of its navigation services is precise to a second in three million years.

But it requires extremely stable thermal conditions to achieve this. Its operating temperature needs to be regulated within a single degree, though in practice a tenth of that can be achieved.

“The passive hydrogen maser is mounted on a 3 mm-thick aluminium plate to help hold a uniform temperature, with waste heat finally radiated to space from the external satellite surface,” added Guido.

The atomic clock and the mounting plate are wrapped in multi-layer insulation and attached to the top panel of the satellite, which is itself kept permanently out of the Sun.