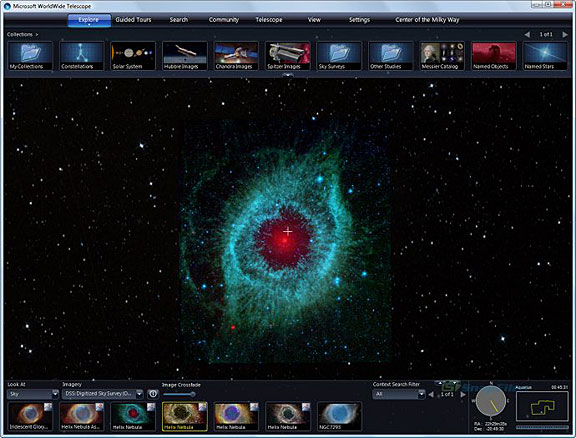 When astronomer John P. Huchra passed away in October 2010, his friends and colleagues at the Harvard-Smithsonian Center for Astrophysics (CfA) sought a way to honor his research and teaching legacies. One way has been the creation of a new interactive WorldWide Telescope (WWT) tour, “John Huchra’s Universe,” which was unveiled at the 217th AAS meeting in Seattle, Washington, on January 11, 2011, and is now available online. WWT is a free and very powerful interactive astronomy program from Microsoft Research.

John Huchra was an enthusiastic observer who loved telescopes and helped pioneer the mapping of the universe through the CfA Redshift Surveys, the Two Micron All Sky Survey (2MASS), and many other efforts. The new WWT tour chronicles John’s career and many scientific accomplishments, focusing on his quest to map the universe in three dimensions. It is narrated by fellow Harvard professor Robert P. Kirshner, who met John when they were both graduate students at Caltech. The tour’s running time is 12.5 minutes, or longer if you explore its interactive features.

“The goal in creating ‘John’s’ tour was to let anyone who wants to learn more about John and his career do so in an engaging, educational, and interactive way,” says Harvard professor Alyssa Goodman, leader of the WWT Ambassadors educational project. “While preparing for his freshman seminar last September, John asked me to show him how to use WWT to explain redshift surveys. It seemed the least we could do was to finish what he started.”

The tour employs the latest capabilities of WWT. To see all the features of “John Huchra’s Universe” and other WWT tours, including 3D views, download the free Windows client: http://www.worldwidetelescope.org

There’s no Mac client right now, but a Web-based “2D” version of WWT is available at the preceding URL for Intel Macs running OS X and Microsoft Silverlight 3.0 (it works on PCs too).

A non-interactive video of “John Huchra’s Universe” is available on YouTube: http://tinyurl.com/huchra

More about downloading WWT and using it to see “John Huchra’s Universe”: https://wwtambassadors.org/wwt/?q=huchra