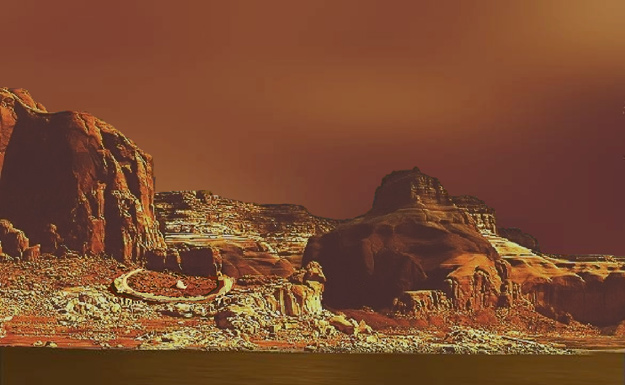 Detailed observations of Saturn’s moon Titan have now spanned 30 years, covering an entire solar orbit for this distant world. Dr. Athena Coustenis from the Paris-Meudon Observatory in France has analyzed data gathered over this time and has found that the changing seasons of Titan affect it more than previously thought. Coustenis will present these results at the European Planetary Science Congress in Madrid on Friday 28th September.

Coustenis explains, “As with Earth, conditions on Titan change with its seasons. We can see differences in atmospheric temperatures, chemical composition and circulation patterns, especially at the poles. For example, hydrocarbon lakes form around the north polar region during winter due to colder temperatures and condensation. Also, a haze layer surrounding Titan at the northern pole is significantly reduced during the equinox because of the atmospheric circulation patterns. This is all very surprising because we didn’t expect to find any such rapid changes, especially in the deeper layers of the atmosphere.”

The main cause of these cycles is solar radiation. This is the dominant energy source for Titan’s atmosphere, breaking up the nitrogen and methane present to create more complex molecules, such as ethane, and acting as the driving force for chemical changes. Titan is inclined at around 27 degrees, similar to the Earth, meaning that the cause of seasons — sunlight reaching different areas with varying intensity due to the tilt — is the same for both worlds. Coustenis says, “It’s amazing to think that the Sun still dominates over other energy sources even as far out as Titan, over 1.5 billion kilometers from us.”

To draw these conclusions data was analyzed from several different missions, including Voyager 1 (1980), the Infrared Space Observatory (1997), and Cassini (2004 onwards), complemented by ground-based observations. Each season on Titan spans around 7.5 years, while it takes 29.5 years for Saturn to orbit the Sun, so data has now been gathered for an entire Titan year, encapsulating all seasons.

Coustenis explains why it is important to investigate this distant moon: “Titan is the best opportunity we have to study conditions very similar to our own planet in terms of climate, meteorology and astrobiology and at the same time a unique world on its own, a paradise for exploring new geological, atmospheric and internal processes.”

http://www.europlanet-eu.org/outreach/images/stories/epsc2012/2titan.jpg 2. An artist’s impression of the Cassini spacecraft performing a fly-by of Titan, gathering data used in this research. Credit: NASA/JPL-Caltech.

http://www.europlanet-eu.org/outreach/images/stories/epsc2012/3titan.jpg 3. This impression of Titan’s surface is based on data from the Huygens mission, giving an idea the view from the ground. Credit: Cassini-Huygens DISR.

http://www.europlanet-eu.org/outreach/images/stories/epsc2012/4titan.png 4. Different missions have gathered data on Titan over a full course of its seasons. Credit: Ralph Lorenz.

The European Planetary Science Congress (EPSC) is the major European meeting on planetary science and attracts scientists from Europe and around the World. The 2012 program includes more than 50 sessions and workshops. The EPSC has a distinctively interactive style, with a mix of talks, workshops and posters, intended to provide a stimulating environment for discussion. This year’s meeting will take place at the IFEMA-Feria de Madrid, Spain, from Sunday 23 September to Friday 28 September 2012. EPSC 2012 is organized by Europlanet, a Research Infrastructure funded under the European Commission’s Framework 7 Program, in association with the European Geosciences Union, with the support of the Centro de Astrobiologia of Spain’s Instituto Nacional de Tecnica Aeroespacial (CAB-INTA). Details of the Congress and a full schedule of EPSC 2012 scientific sessions and events can be found at the official website: http://www.epsc2012.eu/

The Europlanet Research Infrastructure is a major (O6 million) program co-funded by the European Union under the Seventh Framework Program of the European Commission. The Europlanet Research Infrastructure brings together the European planetary science community through a range of Networking Activities, aimed at fostering a culture of cooperation in the field of planetary sciences, Transnational Access Activities, providing European researchers with access to a range of laboratory and field site facilities tailored to the needs of planetary research, as well as on-line access to the available planetary science data, information and software tools, through the Integrated and Distributed Information Service. These programs are underpinned by Joint Research Activities, which are developing and improving the facilities, models, software tools and services offered by Europlanet.