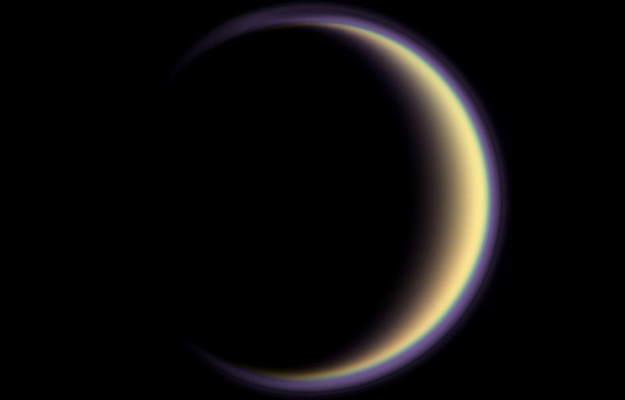 Scientists have long suspected that a vast ocean of liquid water lies under the crusty exterior of Titan, Saturn’s largest moon. New analysis suggests that the internally generated heat that keeps that ocean from freezing relies on the moon’s interactions with Saturn and its other moons.

A new analysis of topographic and gravity data from Titan, the largest of Saturn’s moons, indicates that Titan’s icy outer crust is twice as thick as has generally been thought.

Scientists have long suspected that a vast ocean of liquid water lies under the crust. The new study suggests that the internally generated heat that keeps that ocean from freezing solid depends far more on Titan’s interactions with Saturn and its other moons than had been suspected.

Howard Zebker, a professor of geophysics and of electrical engineering at Stanford University, will present the findings at the annual meeting of the American Geophysical Union (AGU) in San Francisco on Tuesday (Dec. 4) at 1:40 p.m. PST in Room 2005 of Moscone Center West.

Zebker is part of the team interpreting radar data of Titan acquired by NASA’s Cassini spacecraft, which has been orbiting Saturn since 2004. He has been studying the topography of Titan, and has combined improved radar measurements of the moon’s surface with newly released gravity measurements to make the new analysis.

Titan has long intrigued scientists because of its similarities to the Earth. Like Earth, Titan appears to have a layered structure, crudely similar to the concentric layers of an onion, albeit far less edible.

“Titan probably has a core that is a mixture of ice and rock,” said Zebker. The core is overlain by the ocean and icy crust.

The rock in the core is thought to contain radioactive elements left over from the formation of the solar system. As in Earth’s core, when those elements decay, they generate heat. On Titan, that heat is crucial to keeping its ocean from freezing solid.

As Titan orbits Saturn, Titan is slowly spinning on its axis, one spin for each trip around Saturn. Still, that spin is enough for the gravity instrument onboard Cassini to measure the resistance of Titan to any changes in its spin — also called the moment of inertia.

“The moment of inertia depends essentially on the thickness of the layers of material within Titan,” Zebker said. Thus, he and his graduate students were able to use that data to calculate the moon’s internal structure.

Previous models of Titan’s structure estimated the icy crust to be approximately 100 kilometers thick. So if there is more ice, then there should be less heat from the core than had been estimated. One way to account for less heat being generated internally is for there to be less rock and more ice in the core than previous models had predicted.

That all seems simple enough, but there is a complication. Titan is not a true sphere. Its shape is distorted by the gravitational pull of Saturn, making the moon sort of oblong along its equator and a little flattened at the poles.

From measurements of the observed gravitational field of Titan, one can compute what the shape of Titan ought to be. But the new data show that Titan’s shape is much more distorted than would be predicted by a simple gravitational model.

That discrepancy means the internal structure of Titan isn’t quite so simple.

For Titan to exert its observed gravitational pull, the average density from any given point on the moon down to the center of the core has to be the same, said Zebker.

But that’s not the case, since Titan is somewhat squashed. For the data to line up, the density of material under the poles must be slightly greater than it is under the equator.

Since liquid water is denser than ice, Zebker’s team reasoned that the ice layer must be slightly thinner at the poles than at the core, and the layer of water correspondingly thicker.

For the icy crust to vary in thickness across Titan’s surface, the heat distribution within the moon must vary as well. But that variation is not likely to come from the moon’s core — heat generated there would be fairly uniform in all directions.

Zebker said the variation in ice thickness could be a result of variation in the shape of Titan’s orbit around Saturn, which is not perfectly circular.

“The variation in the shape of the orbit, along with Titan’s slightly distorted shape, means that there is some flexure within the moon as it orbits Saturn,” said Zebker. The planet’s other moons also exert some tidal influence on Titan as they all follow their different orbits, but the primary tidal influence is Saturn.

“The tides move around a little as Titan orbits and if you move anything, you generate a little bit of heat.”

For example, if you take a thin strip of metal and flex it, it will begin to weaken and eventually you can break it. That weakening is the result of heat being generated as you flex the metal.

The tidal interactions tend to be more concentrated at the poles than the equator, which means that there is slightly more heat generated at the poles, which in turn melts a little bit of ice at the bottom of the ice layer, thinning the ice in that region in comparison to other parts of the planet, Zebker said.

The Cassini mission was recently given funding to continue operating through 2017, which means about five more years of data will be acquired that can contribute to further refinements of Zebker’s model of Titan.