VANDENBERG AIR FORCE BASE, Calif. (AFPN)  — As the final Titan II rocket streaked skyward from here Oct. 18, it left in its wake a 40-year history that included a transformation from intercontinental ballistic missile to space booster.

The two-stage, liquid-propelled, silo-based Titan II was developed for the United States’ budding ICBM program. The missiles served on the front lines of the Cold War.

Among the quartet of subterranean sentinels that held that duty, including Atlas, Titan, Minuteman and Peacekeeper, the Titan II cast the longest shadow. It was tipped with the largest warhead ever fielded by the United States, the 9-megaton Mark 6, with an explosive equivalence 600 times of that released at Hiroshima. The Titan II stood watch from 1963 to 1987.

The first Titan II ICBM test-launched from here was Feb. 16, 1963. The missile exploded less than a minute after launch.

Maybe it was the name.

“In the early days, they used to give missiles nicknames,” said Jeffrey Geiger, 30th Space Wing historian. “This one was called ‘Awfully Tired.’

“Maybe it was so tired it just blew up,” he said. 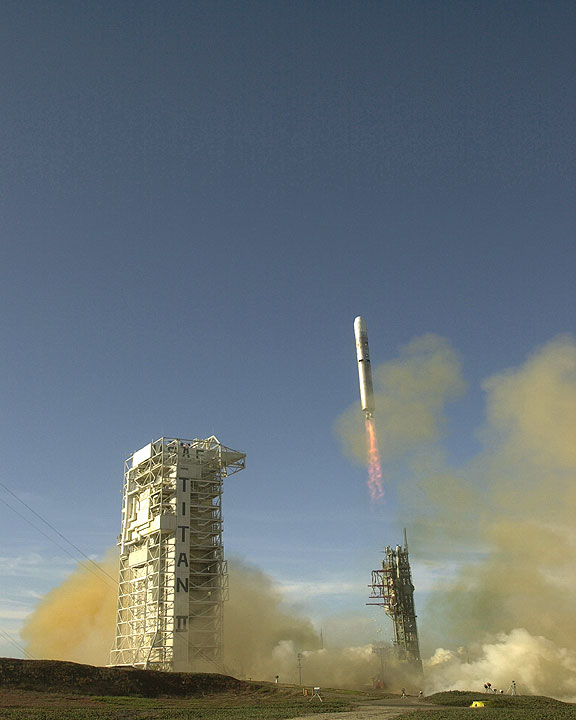 Despite this first disaster, the Titan II program forged ahead. The next missile test launch was April 27, 1963. In the next 24 years, 56 more Titan II ICBMs launched from here.

The Titan II weapon system was deactivated May 5, 1987.

“Once the missile lost its operational viability, it became a space booster,” Geiger said.

In 1988, following decommissioning of the Titan II as a weapon system, 14 of the 54 remaining vehicles were reacquired by Lockheed Martin Corp. The missiles were then retrofitted for spacelift duty.

Since 1989, 12 of those have flown from Vandenberg’s shore, successfully placing a wide array of payloads into polar, low-Earth orbit.

One of the more unique aspects of the Titan’s history is its involvement with the manned-space program.

In the 10 flights of the Gemini Program from 1965 to 1966, modified Titan IIs carried two-person spacecrafts aloft. These flights focused on the logistics of “twinning” spacecraft in orbit, rendezvous and docking procedures to which the Saturn-based Apollo missions were heir, and which brought the first moon landing in 1969.

Those early Gemini flights were not the Titan II’s only contribution to lunar exploration.

“The Titan II’s most interesting payload was the Clementine lunar-space probe,” Gieger said. The 1994 Clementine mission provided evidence of water on the moon. This was also the first lunar launch from Vandenberg.

Of all the Titan IIs built by the Martin Company between 1962 to 1967, 95 have passed fully into history. Two were destroyed in accidents, while 93 have performed their intended function.

Of those, the second-to-last forged was the last to fly, providing the 430,000 pounds of thrust that took the 16th in a series of weather satellites for its six-minute ride 100 nautical miles into space. (Courtesy of Air Force Space Command News Service. First Lt. Michelle Mayo contributed to this story.)