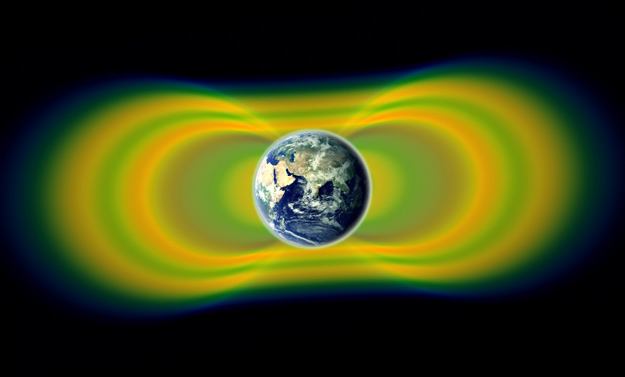 Although scientists involved in NASA’s Van Allen Probes mission were confident they would eventually be able to rewrite the textbook on Earth’s twin radiation belts, getting material for the new edition just two days after launch was surprising, momentous, and gratifying.

The Radiation Belt Storm Probes mission, subsequently renamed in honor of the belts’ discoverer, astrophysicist James Van Allen, was launched in the pre-dawn hours of August 30, 2012. Shortly thereafter, and well ahead of schedule in normal operational protocol, mission scientists turned on the Relativistic Electron-Proton Telescope (REPT) to gather data in parallel with another, aging satellite that was poised to fall from orbit and reenter Earth’s atmosphere. It was a fortuitous decision.

The telescope, which is part of the Energetic Particle, Composition, and Thermal Plasma (ECT) instrument suite led by the Space Science Center at the University of New Hampshire, immediately sent back data that at first confounded scientists but then provided a eureka moment: seen for the first time was a transient third radiation belt of high-energy particles formed in the wake of a powerful solar event that happened shortly after REPT began taking data.

“We watched in amazement as the outer radiation belt disappeared rapidly, but not completely; a small sliver of very energetic electrons remained at its inner edge, which we dubbed the ‘storage ring,'” notes UNH astrophysicist Harlan Spence, principal investigator for the ECT suite and a co-author of a paper detailing the discovery published online today in the journal Science. “When the main outer electron belt reformed over subsequent days, it did so at a greater distance than where the storage ring was located, thus creating the transient, three-belt structure. The textbook was being rewritten right before our eyes.”

Spence, director of the UNH Institute for the Study of Earth, Oceans, and Space, adds, “After decades of studying the radiation belts, this was a completely new phenomenon. With the Van Allen Probes’ instruments we now have the ‘eyes’ capable of seeing such remarkable phenomena. We look forward eagerly to the rest of the mission in order to establish how often such extreme radiation belt structures and dynamics may occur.”

The Van Allen belts are two donut-shaped regions of high-energy particles trapped by Earth’s magnetic field. At the time of their discovery in 1958, they were thought to be relatively stable structures, but subsequent observations have shown they are dynamic and mysterious. However, this type of dynamic three-belt structure was never seen, or even considered, theoretically.

The identical twin satellites chase each other in a common orbit to achieve simultaneous spatial and temporal measurements of the radiation belt environment. The measurement of charged particles is key to the mission, with the ECT suite at the very heart of energetic electron measurements. The instrument suite has the capability to differentiate and precisely measure radiation belt particles on the fly — an extremely complex technical achievement, and necessary to push the science forward.

The suite’s science goals address the top-level mission objective to provide understanding — ideally to the point of predictability — of how populations of electrons moving at nearly the speed of light and penetrating ions in space form or change in response to variable inputs of energy from the Sun.

Says Spence, “These events we’ve recorded are extraordinary and are already allowing us to refine and confirm our theories of belt dynamics in a way that will lead to predictability of their behavior, which is important for understanding space weather and ultimately for the safety of astronauts and spacecraft that operate within such a hazardous region of geospace.”

Notes Nicky Fox, Van Allen Probes deputy project scientist at The Johns Hopkins University Applied Physics Laboratory (APL) in Laurel, Md., “Even 55 years after their discovery, the Earth’s radiation belts are still capable of surprising us, and still have mysteries to discover and explain. What the Van Allen Probes have shown is that the advances in technology and detection made by NASA have already had an almost immediate impact on basic science.”

The Van Allen Probes project is the second mission in NASA’s Living With a Star program to explore aspects of the connected Sun-Earth system that directly affect life and society. APL built the probes and manages the mission. The program is managed by NASA Goddard.

The University of New Hampshire, founded in 1866, is a world-class public research university with the feel of a New England liberal arts college. A land, sea, and space-grant university, UNH is the state’s flagship public institution, enrolling 12,200 undergraduate and 2,300 graduate students.