By SpaceRef Editor
May 20, 2004
Filed under Arizona State University, Extrasolar Planets, US

Like most creation stories, this one is dramatic: we began, not as a
mere glimmer buried in an obscure cloud, but instead amidst the glare
and turmoil of restless giants.

Or so says a new theory, supported by stunning astronomical images and
hard chemical analysis. For years most astronomers have imagined that
the Sun and Solar System formed in relative isolation, buried in a
quiet, dark corner of a less-than-imposing interstellar cloud. The new
theory challenges this conventional wisdom, arguing instead that the
Sun formed in a violent nebular environment – a byproduct of the chaos
wrought by intense ultraviolet radiation and powerful explosions that
accompany the short but spectacular lives of massive, luminous stars.

The new theory is described in a “Perspectives” article appearing in
the May 21 issue of Science. The article was written by a group of
Arizona State University astronomers and meteorite researchers who cite
recently discovered isotopic evidence and accumulated astronomical
observations to argue for a history of development of the Sun, the
Earth and our Solar System that is significantly different from the
traditionally accepted scenario.

If borne out by future work, this vision of our cosmic birth could have
profound implications for understanding everything from the size and
shape of our solar system to the physical makeup of the Earth and the
development of the chemistry of life. 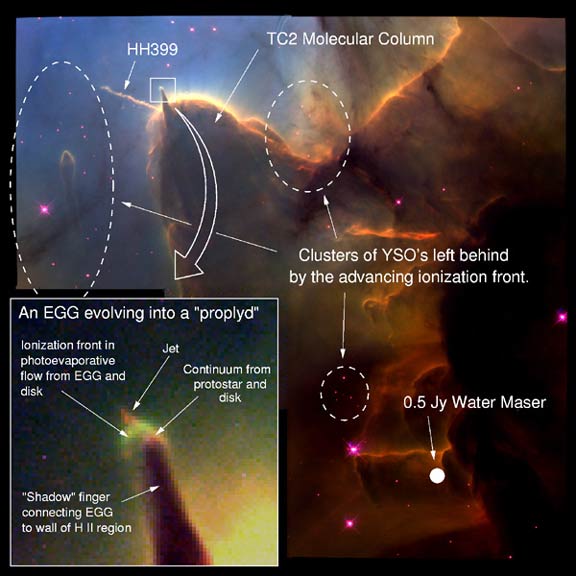 “There are two different sorts of environment where low-mass stars
like the Sun form,” explained ASU astronomer Jeff Hester, the essay’s
lead author. “In one kind of star-forming environment, you have a
fairly quiescent process in which an undisturbed molecular cloud slowly
collapses, forming a star here… a star there. The other type of
environment in which Sun-like stars form is radically different. These
are more massive regions that form not only low-mass stars, but
luminous high-mass stars, as well.”

More massive regions are very different because once a high-mass star
forms, it begins pumping out huge amounts of energy that in turn
completely changes the way Sun-like stars form in the surrounding
environment. “People have long imagined that the Sun formed in the
first, more quiescent type of environment,” Hester noted, “but we
believe that we have compelling evidence that this is not the case.”

Critical to the team’s argument is the recent discovery in meteorites
of patterns of isotopes that can only have been caused by the
radioactive decay of iron-60, an unstable isotope that has a half life
of only a million and a half years. Iron-60 can only be formed in the
heart of a massive star and thus the presence of live iron-60 in the
young Solar System provides strong evidence that when the Sun formed
(4.5 billion years ago) a massive star was nearby.

Hester’s coauthors on the Science essay include Steve Desch, Kevin
Healy, and Laurie Leshin. Leshin is a cosmochemist and director of
Arizona State University’s Center for Meteorite Studies. “One of the
exciting things about the research is that it is truly
transdisciplinary, drawing from both astrophysics and the study of
meteorites – rocks that you can pick up and hold in your hand – to
arrive at a new understanding of our origins,” noted Leshin.

When a massive star is born, its intense ultraviolet radiation forms an
“HII region” – a region of hot, ionized gas that pushes outward through
interstellar space. The Eagle Nebula, the Orion Nebula, and the Trifid
Nebula are all well-known examples of HII regions. A shock wave is
driven in advance of the expanding HII region, compressing surrounding
gas and triggering the formation of new low-mass stars. “We see
triggered low-mass star formation going on in HII regions today,” said
Healy, who recently completed a study of radio observations of this
process at work.

The star does not have much time to get its act together, though.
Within 100,000 years or so, the star and what is left of its small
natal cloud will be uncovered by the advancing boundary of the HII
region and exposed directly to the harsh ultraviolet radiation from the
massive star. “We see such objects emerging from the boundaries of HII
regions,” Hester said. “These are the ‘evaporating gaseous globules’
or ‘EGGs’ seen in the famous Hubble image of the Eagle Nebula.”

EGGs do not live forever either. Within about ten thousand years an
EGG evaporates, leaving behind only the low-mass star and its
now-unprotected protoplanetary disk to face the brunt of the massive
star’s wrath. Like a chip of dry ice on a hot day, the disk itself now
begins to evaporate, forming a characteristic tear-drop-shaped
structure like the “proplyds” seen in Hubble images of the Orion
Nebula. “Once we understood what we were looking at, we realized that
we had a number of images of EGGs caught just as they were turning into
proplyds,” said Hester. “The evolutionary tie between these two
classes of objects is clear.”

Within another ten thousand years or so the proplyd, too, is eroded
away. All that remains is the star itself, surrounded by the inner
part of the disk (comparable in size to our Solar System), which is
able to withstand the continuing onslaught of radiation. It is from
this disk and in this environment that planets may form.

The process leaves a Sun-like star and its surrounding disk sitting in
the interior of a low density cavity with a massive star close at hand.
Massive stars die young, exploding in violent events called
“supernovas.” When a supernova explodes it peppers surrounding infant
planetary systems with newly synthesized chemical elements – including
short-lived radioactive isotopes such as iron-60.

“This is where the meteorite data come in,” said Hester. “When we look
at HII regions we see that they are filled with young, Sun-like stars,
many of which are known to be surrounded by protoplanetary disks. Once
you ask the question, ‘what is going to happen when those massive stars
go supernova?’, the answer is pretty obvious. Those young disks are
going to get enriched with a lot of freshly-made elements.”

“When you then pick up a meteorite and find a mix of materials that can
only be easily explained by a nearby supernova, you realize that you
are looking at the answer to a very longstanding question in astronomy
and planetary science,” Desch added.

“So from this we now know that if you could go back 4.5 billion years
and watch the Sun and Solar System forming, you would see the kind of
environment that you see today in the Eagle or Trifid nebulas,” said
Hester. 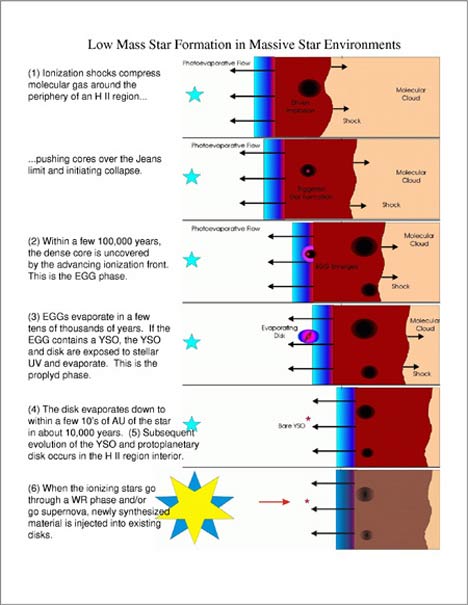 Illustration showing a high-mass star’s effect on a nearby molecular cloud, resulting in the formation of a low-mass star like our Sun.

“There are many aspects of our Solar System that seem to make sense in
light of the new scenario,” notes Leshin. “For example, this might be
why the outer part of the Solar System – the Kuiper Belt – seems to end
abruptly. Ultraviolet radiation would also have played a role in the
organic chemistry of the young solar system, and could explain other
peculiar effects such as anomalies in the abundances of isotopes of
oxygen in meteorites.”

One of the most intriguing speculations is that the amount of
radioactive material injected into the young solar system by a
supernova might have profoundly influenced the habitability of Earth
itself. Heat released by the decay of this material may have been
responsible for “baking out” the planetesimals from which the earth
formed, and in the process determining how much water is on Earth
today.

“It is kind of exciting to think that life on Earth may owe its
existence to exactly what sort of massive star triggered the formation
of the Sun in the first place, and exactly how close we happened to be
to that star when it went supernova,” mused Hester. “One thing that is
clear is that the traditional boundaries between fields such as
astrophysics, meteoritics, planetary science, and astrobiology just got
less clear-cut. This new scenario has a lot of implications, and makes
a lot of new predictions that we can test.”

If it is accepted, the new theory may also be of use in looking for
life in the universe beyond. “We want to know how common Earth-like
planets are. The problem with answering that question is that if you
don’t know how Earth-like planets are formed – if you don’t understand
their connection with astrophysical environments – then all you can do
is speculate,” Hester said.

“We think that we’re starting to see a very specific causal connection
between astrophysical environments and the things that have to be in
place to make a planet like ours.”