The Sun Gets a “Moon Bite” on Monday June 10th

By SpaceRef Editor
June 9, 2002
Filed under Sky and Telescope, US

Solar Eclipses are grand, cosmic events that no nature-watcher wants to
miss — and an opportunity to see one will occur over much of the United
States and Canada this Monday, June 10th.

This will be only a partial eclipse, which won’t be as spectacular as a
total one. The Sun will never be completely blackened by the Moon crossing
in front of it, and daylight will dim by only a trace. But the eclipse will
still provide a powerful celestial spectacle — for those who know how to
watch it safely.

Those in the West and northern Plains states will have the best view
(weather permitting), because the eclipse happens while the Sun is still
well up in the western sky. Across much of the Midwest and South, the
eclipse will be in progress at the time of sunset, affording a beautiful
“crescent Sun” on the horizon. Only the East misses out completely.

In the zones where the eclipse is visible, the farther south you are the
better. Canadians will see only a fairly small dent appearing in one side
of the Sun, but in the Southwest and northern Mexico, the Sun will turn
into a dramatic, narrow crescent.

The eclipse will last anywhere from less than a half hour (where
interrupted by sunset) to three hours. You’ll need to know when the eclipse
begins, reaches its maximum, and ends for your location. Below is a
timetable for a few large U.S. metropolitan areas. 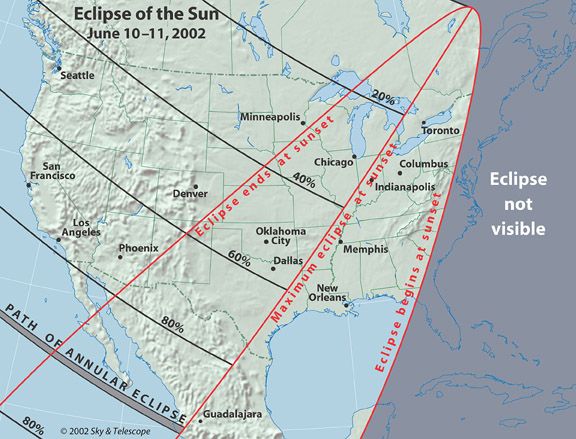 Most North Americans living west of the Mississippi River will see a partial solar eclipse on June 10th (west of the International Date Line: June 11th). On the East Coast, the Sun will set before the eclipse occurs. Black lines indicate the fraction of the Sun’s diameter that will be covered at maximum eclipse.ÊCredit: Sky & Telescope illustration.

In the table, “Alt.” is the altitude of the Sun above the horizon at
maximum eclipse, the depth of which is expressed two different ways:
magnitude (“Mag.”) denotes how far the Moon will bite into the Sun’s
diameter, while obscuration (“Obs.”) denotes how much of the Sun’s disk
area will be covered.

Times for more than 300 cities in North America are available here:
http://SkyandTelescope.com/observing/objects/eclipses/article_580_3.asp

Elsewhere in the world, the partial eclipse will also be visible across
most of the Pacific Ocean, in Japan, much of China, the Philippines, and
parts of Indonesia and north-central Australia. At locations west of the
International Date Line the event happens on the morning of June 11th.

The eclipse will be annular — with the Sun briefly seen as a thin,
brilliant ring of light — along a narrow track crossing the Pacific and
touching land only at Tinian, Saipan, and a bit of the Mexican coast just
south of Puerto Vallarta. For further information see the article here:
http://SkyandTelescope.com/observing/objects/eclipses/article_580_1.asp

During a partial eclipse, some of the bright Sun remains in view. WARNING:
You should never look at the Sun — partially eclipsed or not — without
proper eye protection (such as specially filtered eclipse glasses)! Staring
at the bright Sun can burn your retina, leaving a permanent blind spot in
the center of your vision. A partial eclipse poses a special danger only in
that it can prompt people to look directly at the Sun, something they
wouldn’t normally do. Different ways to watch the Sun safely are described
here:
http://SkyandTelescope.com/observing/objects/eclipses/article_609_1.asp

SKY & TELESCOPE is making the following illustrations available to the news
media at http://SkyandTelescope.com/aboutsky/pressreleases/article_623_1.asp. Permission is granted for one-time, nonexclusive use in print and
broadcast media, as long as appropriate credits (as noted in each caption)
are included. Web publication must include a link to SkyandTelescope.com.

* color map of North America, showing where the partial and annular solar
eclipse will be visible.

* color animation showing how the eclipse will appear simultaneously from
32 cities in North America and Hawaii (requires Flash 6; PC and Mac versions).

* color photographs of an eclipsed Sun, showing annular and partial phases,
taken on May 10, 1994.