The Sources of Solar Hazards In Interplanetary Space

Denver, CO — Life on Earth is nurtured by heat and light from the Sun.
Yet life on Earth also is inconvenienced, sometimes potentially threatened,
when the Sun sends out huge blasts of energy and high-speed particles. On
Earth, our atmosphere and magnetic field help protect us. But in deep
outer space, and on the surface of the Moon and Mars, astronauts are
vulnerable to solar eruptions. Predicting such eruptions and how they
affect interplanetary space would help mitigate their effects, but currently
is impossible.

Today at the 204th meeting of the American Astronomical Society in
Denver, Colorado, Smithsonian astrophysicist Jun Lin (Harvard-
Smithsonian Center for Astrophysics) and colleagues announced that they
have gained a new understanding of how to identify and describe the
sources of solar radiation hazards, which are composed of solar energetic
particles. Over time, that knowledge may lead to better predictions of such
hazards: a capability that will be needed when astronauts begin fulfilling
the vision of human exploration beyond Earth.

“Our current ability to forecast solar energetic particle events is more
primitive than our ability to forecast thunderstorms before the invention of
satellites,” said Lin. “Eventually, we plan to monitor the Sun for signs of
high-energy particle emission just as we monitor the Earth for storm fronts.
Ultimately, the goal is to predict such hazards just like meteorologists
predict rainstorms.” 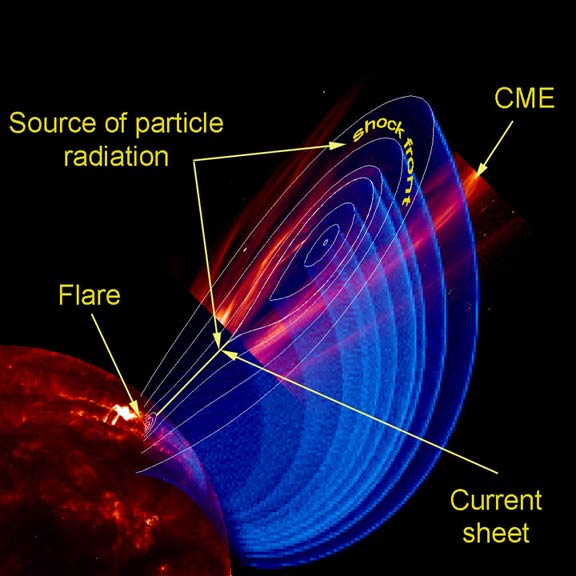 The Threat Of Space Storms

The production of hazardous high-energy particles is known to be
associated with large solar storms, which consist of catastrophic eruptions
near the solar surface called flares and ejections of gases and magnetism
called coronal mass ejections.

Both flares and coronal mass ejections are believed to produce hazardous
high-energy particles that scatter off waves, bathing interplanetary space
in those particles.

The Earth’s atmosphere and magnetosphere protect people on the ground,
and even astronauts in low-Earth-orbit are reasonably protected by the
Earth’s magnetosphere, although they occasionally seek shelter in
protected modules of the International Space Station.

However, astronauts traveling to the Moon or Mars leave such protections
behind. Therefore, prompt storm warnings, well-shielded spacecraft, and
lunar and martian bunkers will be critical to the success of human space
exploration.

“That’s where our work comes in,” said Leonard Strachan (CfA).
“Meteorologists use radar to look for hook echoes signaling an
approaching tornado. We are working to determine what signs from the
Sun signal the production of energetic particle hazards.”

Particle hazards have two different sources, much like tornadoes may be
spawned either by a storm front or by a hurricane. The first emissions
lasting less than an hour come from strong solar flares near the Sun’s
surface that feed on the Sun’s evolving magnetic field. Longer duration
production by shock waves is generated by coronal mass ejections (CMEs)
— dramatic solar explosions that propel huge amounts of gas away from
the Sun at tremendous speeds.

Over the past 8 years, CfA scientists have been using observations from
the Solar and Heliospheric Observatory (SOHO) to better understand the
sources of both types of energetic particle production. The Smithsonian-
developed Ultraviolet Coronagraph Spectrometer (UVCS) instrument on
SOHO observes CMEs above the solar surface, in the region of their peak
acceleration into the solar system.

Substantial progress has been made in identifying and describing the sites
that produce energetic particles for both the initial flare-related production,
and for the longer-duration coronal mass ejection production of the
hazards.

For the flare-related portion, a theoretical model developed by Jun Lin
(CfA) and Terry Forbes (University of New Hampshire) has led to new
ideas about the precise source region of the energetic particles. Instead of
blasting outward from the flare itself, Lin and Forbes propose that many of
these particles arise in a thin electrified “sheet” of gas that stretches from
the flare site to the base of the coronal mass ejection. This current sheet
acts much as an Earth-bound particle accelerator, pushing atomic particles
to almost the speed of light.

“The electrified current sheets predicted by the model have been seen by
UVCS,” said Lin. “It was remarkable that right where the model predicted
a sheet would be, UVCS saw an extremely narrow region where the gas
temperature jumped up from less than a million degrees Celsius to more
than 6 million. This intense heating is one of the hallmarks of the current
sheet model.”

For the CME-related shock portion, UVCS observations have made the
first-ever determinations of the detailed properties of these shocks — i.e.,
when and where they form, as well as their temperatures, speeds, and
chemical compositions. Knowing these detailed properties is crucial for
being able to predict the strength of the energetic particle production that
will result from a particular event. Prior to SOHO, observations of CMEs
have seen bubbles and tongues of ejected gas, but not evidence of the
shock wave itself.

“We know that interplanetary shocks heat up the tenuous gas as they plow
through the solar corona,” said John Raymond (CfA). “The ultraviolet
observations let us see both pre-existing cool gas get pushed aside by the
shock, as well as the much hotter, 50 million degree C gas that is produced
directly by the shock. Using these observations, we determine the
existence, location, and strength of the shock.”

Also, observing the formation of the shock at a particular place in the solar
atmosphere gives the scientists an extra piece of information: the intensity
of the magnetic field. Although measurements of the magnetic field
intensity on the surface of the Sun are routine, there have been no known
methods of measuring this key quantity high up in the corona.

In order to put these measurements into a real-time prediction system for
the radiation hazards to astronauts, the observed CME shock properties
have to be input into a computer model. These models are under
development at a number of institutions around the world, but in order to
have real-time predictive capability, they require that scientists input the
initial properties of the shocks. That data can come only from observations
of shock formation in the corona.

The ongoing SOHO observations are continuing to test the feasibility of
using these observations for real-time space storm prediction, but a true
monitoring system has yet to be built.

Headquartered in Cambridge, Mass., the Harvard-Smithsonian Center for
Astrophysics (CfA) is a joint collaboration between the Smithsonian
Astrophysical Observatory and the Harvard College Observatory. CfA
scientists, organized into six research divisions, study the origin, evolution
and ultimate fate of the universe.

Note to editors: A high-resolution image to accompany this release is
available online at:
http://www.cfa.harvard.edu/press/pr0420image.html