By SpaceRef Editor
January 11, 2013
Filed under Astrobiology, FECYT - Spanish Foundation for Science and Technology, Mars, US 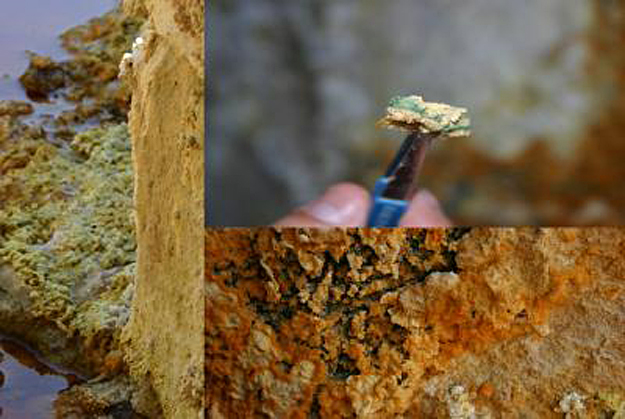 Researchers at the Centre of Astrobiology have identified microorganisms that live inside salt deposits in the acidic and ferrous environment of the Tinto River in Huelva, Spain. The extreme conditions of these microniches appear to be similar to those of the salt deposits on Mars and Jupiter’s moon, Europa. This possibility should be borne in mind on missions operating in these places, such as Curiosity.

The high doses of radiation, lack of moisture and extreme temperature and pressure on the surface of Mars make the development of life difficult. Within this hostile environment, scientists are searching for “friendlier” niches that could encourage life. One of the candidates is the salt deposits.

A team from the Centre of Astrobiology (CAB, INTA-CSIC) has analysed this kind of environment on Earth: the salt deposits associated to a mineral with sulphur and iron named natrojarosite. It can be found in the Rio Tinto basin in Huelva and is very similar to one detected on Mars: jarosite. Its presence reveals the past or present existence of water.

“The salt deposits are good ‘hosts’ for biological remains and even life itself in extreme circumstances,” as outlined to SINC by Felipe Gomez, coauthor of the study published in the ‘Planetary and Space Science’.

“The reason is that conditions in this environment remain less adverse than those of their surroundings given that they provide protection from radiation for example, and they keep moisture levels higher than outside,” explains the researcher.

With the help of microscopic techniques and molecular ecology, the team has discovered a film of bacteria and algae living in salt ‘microniches’ invisible to the naked eye. Up to five different morphologies have been found of microorganisms belonging to the Dunaliella and Cyanidium genera.

The deposits analysed have been formed by layers each with a width of just a few millimetres. They make up a “completely different” ecosystem to the strange environment of Rio Tinto.

“The precipitated minerals could only have been formed in such an acidic environment like this one and it is still even home to microbial communities in development. In order words, here they find their ideal environment,” says Gomez.

According to the study, “the discovery of these protected microniches in one of Mars’ analogue on Earth, like Rio Tinto, is an important step in evaluating the habitability potential of the red planet.”

NASA’s Mars Global Surveyor probe has already detected alluvial fan-shaped salt formations on the Martian surface and scientists believe that that they could exist below the frozen ocean of one of Jupiter’s satellites, Europa.

“From the astrological point of view, salt deposits are of great importance and should be considered when searching for life on space exploration missions, like the current Curiosity rover mission on Mars,” concludes Gomez. In fact, salt deposits of astrobiological interest have been found not far from where the NASA rover is.

On Earth the CAB team has also studied extreme salt environments in Chott el Djerid Lake (Tunisia) and under the Atacama Desert (Chile).