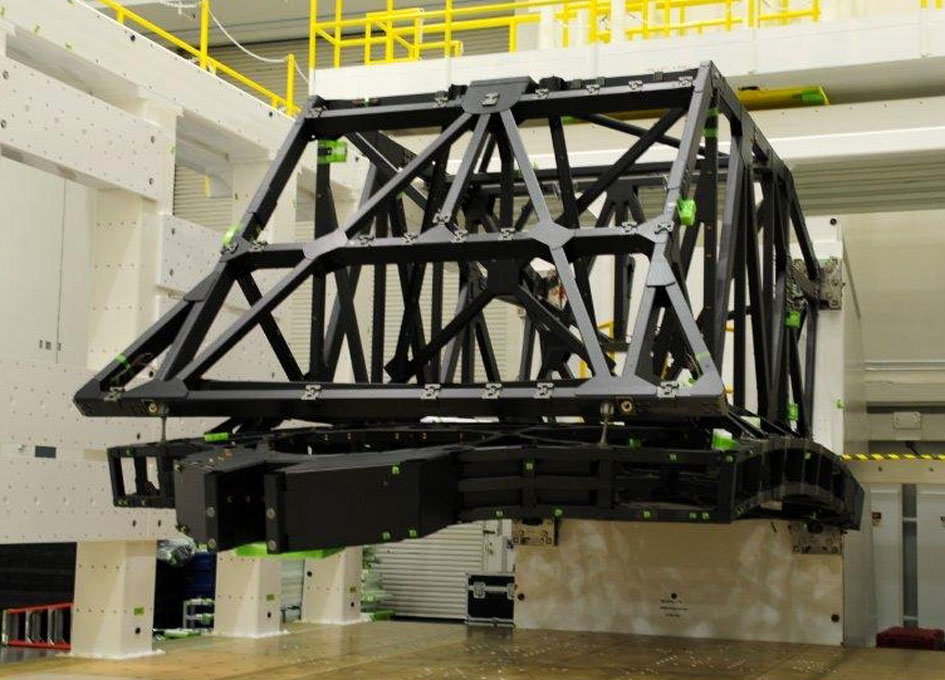 The backplane of NASA’s James Webb Space Telescope was mounted to a structure for static load testing to verify it can withstand the rigors of launch and hold the weight needed to support the telescope in space. Image Credit: Northrop Grumman

NASA’s James Webb Space Telescope has reached another development milestone with the completion of static load testing of its primary mirror backplane support structure (PMBSS) moving the telescope one step closer to its 2018 launch.

“Static testing demonstrates the backplane has the structural integrity to withstand the forces and vibrations of launch and is the final test prior to starting the integration of the backplane with the rest of the telescope,” said Lee Feinberg, NASA’s Optical Telescope Element manager at the agency’s Goddard Space Flight Center in Greenbelt, Maryland.

The Northrop Grumman Corporation and ATK of Magna, Utah, completed the testing before delivering the structure to Northrop Grumman’s facilities in Redondo Beach, California.

“This is the largest, most complex cryogenically stable structure humans have ever built,” said Scott Texter, Optical Telescope Element manager for Northrop Grumman. “Completion of the static testing verifies it can hold the weight it is designed to hold. Now the structural backbone of the observatory is officially verified and ready for integration.”

Despite its size and complexity, the PMBSS is one of the most lightweight precision-alignment truss structures ever designed and built. When fully deployed, it measures approximately 24 feet tall by 19.5 feet wide by more than 11.5 feet deep, and weighs only 2,180 pounds. Once fully assembled and populated, the PMBSS will support a mission payload and instruments that weigh more than 7,300 pounds. With a full launch load, it will support the equivalent of 12 times its own weight.

The PMBSS is designed to minimize changes in the shape of the telescope caused when one side is hotter than the other. While the telescope is operating at a range of extremely cold temperatures, between -406 and -343 degrees Fahrenheit, the backplane must not move more than 38 nanometers, approximately 1/1,000 the diameter of a human hair.

Under contract from NASA, Northrop Grumman is the lead contractor for the design and development of the Webb telescope’s optics, sunshield and spacecraft. ATK designed, engineered and constructed more than 10,000 parts for the PMBSS at its facilities in Magna. They used composite parts, lightweight graphite materials, state-of-the-art material sciences and advanced fabrication techniques to build the structure.

The next step for the space telescope is to integrate the composite structures with the deployment mechanisms to create the overall Optical Telescope Element (OTE) structure. The OTE structure will then be shipped to Goddard for integration with the mirrors. NASA and Northrop Grumman will perform cryogenic testing of the PMBSS structure after mirror integration is complete.

The James Webb Space Telescope is the world’s next-generation space observatory and successor to NASA’s Hubble Space Telescope. Designed to be the most powerful space telescope ever built, Webb will observe the most distant objects in the universe, provide images of the first galaxies formed and see unexplored planets around distant stars. The Webb telescope is a joint project of NASA, the European Space Agency and the Canadian Space Agency.