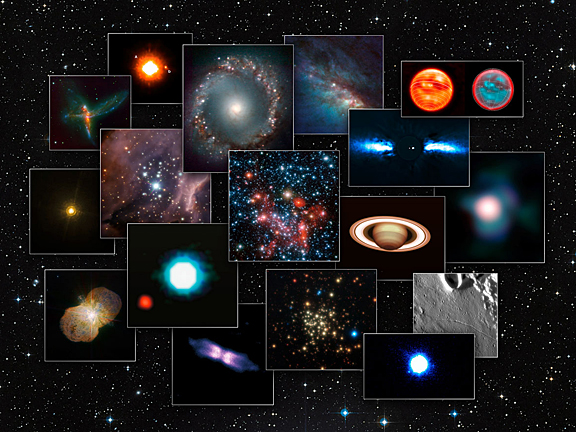 25 November 2011 marked the 10th anniversary of NACO, the first adaptive optics system to be installed on the ESO Very Large Telescope (VLT). NACO’s ultra-sharp vision has greatly contributed to the major discoveries made with the VLT.

NACO, short for NAOS-CONICA, was the first adaptive optics instrument to be installed on the VLT, in 2001 (http://www.eso.org/public/news/eso0137). By compensating for turbulence in the Earth’s atmosphere, NACO greatly improved the telescope’s image sharpness and scientific potential. The instrument, developed by French and German consortia with the collaboration of ESO, was the first of a series of adaptive optics instruments that would be installed on the VLT Unit Telescopes.

Adaptive optics technology has continued to evolve, and a new generation of instruments is under construction or being planned to ensure that even better facilities will be available on the VLT in future. Looking into the next decade yet more advanced adaptive optics systems are under development for ESO’s European Extremely Large Telescope, the E-ELT.

The CONICA Near-Infrared CAmera was developed by a German consortium, with extensive ESO collaboration. The consortium consists of the Max-Planck-Institut fuer Astronomie (MPIA, Heidelberg) and the Max-Planck-Institut fuer Extraterrestrische Physik (MPE, Garching). The lead scientist is Rainer Lenzen (MPIA), with Reiner Hofmann (MPE) as co-investigator.

MPE press release: “Sharp eyes at the VLT – a decade of observations with NACO” http://www.mpe.mpg.de/News/20111125/text.html

ESO, the European Southern Observatory, is the foremost intergovernmental astronomy organization in Europe and the world’s most productive astronomical observatory. It is supported by 15 countries: Austria, Belgium, Brazil, the Czech Republic, Denmark, France, Finland, Germany, Italy, the Netherlands, Portugal, Spain, Sweden, Switzerland and the United Kingdom. ESO carries out an ambitious program focused on the design, construction and operation of powerful ground-based observing facilities enabling astronomers to make important scientific discoveries. ESO also plays a leading role in promoting and organizing cooperation in astronomical research. ESO operates three unique world-class observing sites in Chile: La Silla, Paranal and Chajnantor. At Paranal, ESO operates the Very Large Telescope, the world’s most advanced visible-light astronomical observatory and two survey telescopes. VISTA works in the infrared and is the world’s largest survey telescope and the VLT Survey Telescope is the largest telescope designed to exclusively survey the skies in visible light. ESO is the European partner of a revolutionary astronomical telescope ALMA, the largest astronomical project in existence. ESO is currently planning a 40-meter-class European Extremely Large optical/near-infrared Telescope, the E-ELT, which will become “the world’s biggest eye on the sky”.