Tau Ceti, Closest Single Star Like Our Sun, May Have Habitable Planet 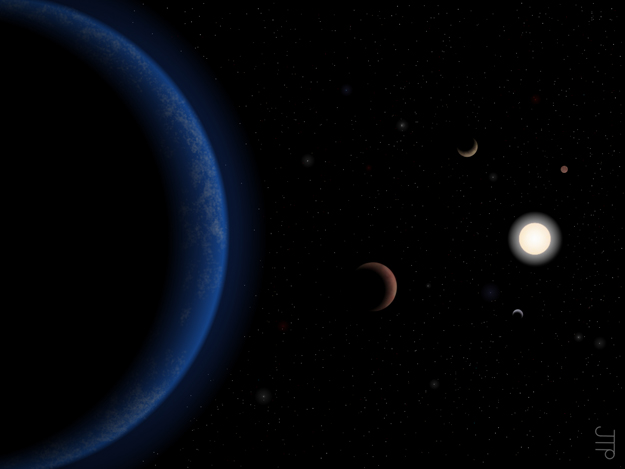 An international team of astronomers led by the University of Hertfordshire has discovered that Tau Ceti, one of the closest and most Sun-like stars, may host five planets — with one in the star’s habitable zone.

At a distance of twelve light-years and visible with the naked eye in the evening sky, Tau Ceti is the closest single star that has the same spectral classification as our Sun. Its five planets are estimated to have masses between two and six times the mass of the Earth — making it the lowest-mass planetary system yet detected. One of the planets lies in the habitable zone of the star and has a mass around five times that of Earth, making it the smallest planet found to be orbiting in the habitable zone of any Sun-like star.

The international team of astronomers, from the UK, Chile, the USA, and Australia, combined more than six-thousand observations from three different instruments and intensively modeled the data. Using new techniques, the team has found a method to detect signals half the size previously thought possible. This greatly improves the sensitivity of searches for small planets and suggests that Tau Ceti is not a lone star but has a planetary system.

Mikko Tuomi, from the University of Hertfordshire and the first author of the paper, said: “We pioneered new data modeling techniques by adding artificial signals to the data and testing our recovery of the signals with a variety of different approaches. This significantly improved our noise modeling techniques and increased our ability to find low mass planets.”

“We chose Tau Ceti for this noise modeling study because we had thought it contained no signals. And as it is so bright and similar to our Sun it is an ideal benchmark system to test out our methods for the detection of small planets,” commented Hugh Jones from the University of Hertfordshire.

James Jenkins, Universidad de Chile and Visiting Fellow at the University of Hertfordshire, explained: “Tau Ceti is one of our nearest cosmic neighbors and so bright that we may be able to study the atmospheres of these planets in the not too distant future. Planetary systems found around nearby stars close to our Sun indicate that these systems are common in our Milky Way galaxy.”

Over 800 planets have been discovered orbiting other worlds, but planets in orbit around the nearest Sun-like stars are particularly valuable. Steve Vogt from University of California Santa Cruz said: “This discovery is in keeping with our emerging view that virtually every star has planets, and that the galaxy must have many such potentially habitable Earth-sized planets. They are everywhere, even right next door! We are now beginning to understand that Nature seems to overwhelmingly prefer systems that have a multiple planets with orbits of less than one hundred days. This is quite unlike our own solar system where there is nothing with an orbit inside that of Mercury. So our solar system is, in some sense, a bit of a freak and not the most typical kind of system that Nature cooks up.”

“As we stare the night sky, it is worth contemplating that there may well be more planets out there than there are stars … some fraction of which may well be habitable,” remarked Chris Tinney from the University of New South Wales.

“Signals embedded in the radial velocity noise — Periodic variations in the Tau Ceti velocities” is accepted for publication in the journal Astronomy & Astrophysics and is available at http://star-www.herts.ac.uk/~hraj/tauceti

The result is based on spectra from taken as part of the Anglo-Australian Planet Search with the UCLES spectrograph on the Anglo-Australian Telescope, HIRES on the Keck Telescope and reanalysis of spectra taken with the HARPS spectrograph and available through the European Southern Observatory public archive. This work would have not been possible without the ESO public data policies and the excellent work of the ESO Software development division and the ESO Science Archive Facility.

The University of Hertfordshire (http://www.herts.ac.uk ) is the UK’s leading business-facing university and an exemplar in the sector. It is innovative and enterprising and challenges individuals and organizations to excel. The University of Hertfordshire is one of the region’s largest employers with over 2,300 staff and a turnover of almost #231 million. With a student community of over 27,700 including more than 2,900 international students from over eighty-five different countries, the University has a global network of over 170,000 alumni.