Taking the pulse of a black hole system

By SpaceRef Editor
January 13, 2011
Filed under Astrophysics, Harvard University, US 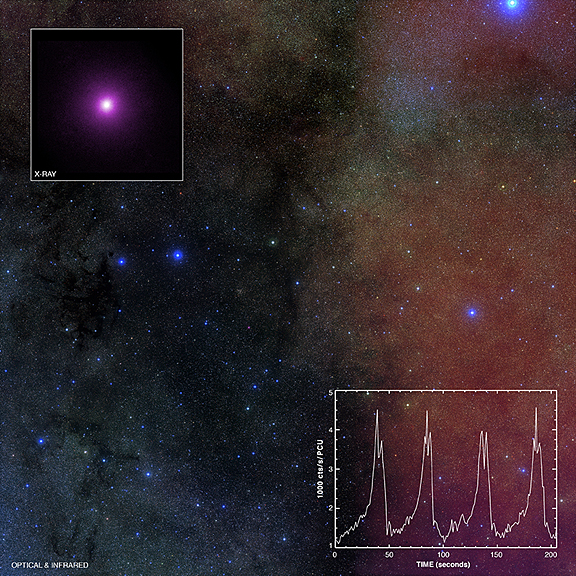 Using two NASA X-ray satellites, astronomers have discovered what drives the “heartbeats” seen in the light from an unusual black hole system. These results give new insight into the ways that black holes can regulate their intake and severely curtail their growth.

This study examined GRS 1915+105 (GRS 1915 for short), a binary system in the Milky Way galaxy containing a black hole about 14 times more massive than the Sun that is feeding off material from a companion star. As this material falls towards the black hole, it forms a swirling disk that emits X-rays. The black hole in GRS 1915 has been estimated to rotate at the maximum possible rate, allowing material in the inner disk to orbit very close to the black hole, at a radius only 20% larger than the event horizon, where the material travels at 50% the speed of light.

Using the Chandra X-ray Observatory and the Rossi X-ray Timing Explorer (RXTE), researchers monitored this black hole system over a period of eight hours. As they watched, GRS 1915 gave off a short, bright pulse of X-ray light approximately every 50 seconds, varying in brightness by a factor of about three. This type of rhythmic cycle closely resembles an electrocardiogram of a human heart — though at a slower pace.

“Trying to understand the physics of this ‘heartbeat state’ is a little like trying to understand how a person’s heart beats by watching changes in the blood flow through their veins,” said Joey Neilsen, a graduate student at Harvard University, who presented these results from his dissertation at the American Astronomical Society (AAS) meeting in Seattle, Wash.

It was previously known that GRS 1915 can develop such heartbeats when its mass consumption rate is very high. After monitoring it with the special combination of Chandra and RXTE, Neilsen and his collaborators realized that they could use the pulses to figure out what controls how much material the black hole consumes.

“With each beat, the black hole pumps an enormous amount of energy into its surroundings,” said Neilsen. “All that energy has profound consequences for the disk, even very far from the black hole.”

Changes in the X-ray spectrum observed by RXTE during each heartbeat reveal that the inner region of the disk, at only a few times the radius of the black hole’s event horizon, emits enough radiation to push material away from the black hole. Eventually the disk gets so bright and so hot that it essentially disintegrates and plunges towards the black hole. Then the cycle begins again.

“This behavior is a clear and startling demonstration of the power of radiation in the fight against gravity,” said co-author Ron Remillard of the Massachusetts Institute of Technology. “During the heartbeat state, radiation prevents the black hole from ingesting as much material as it would otherwise.”

Neilsen and his colleagues estimated that the rate at which material falls onto the black hole changes by about a factor of ten during each cycle, with the maximum rate coinciding with the X-ray pulse. Between pulses, the inner part of the disk refills from material farther away from the black hole.

The astronomers also used Chandra’s high-resolution spectrograph to study the effects of this heartbeat variation on regions of the disk very far from the black hole, at distances of about 100,000 to a million times the radius of the event horizon. By analyzing the Chandra spectrum, they found a very strong wind being driven away from the outer parts of the disk. The wind changed significantly in just 5 seconds, nearly 100 times faster than has ever been seen in a wind from a stellar-mass black hole.

The researchers concluded that the strong X-ray pulse from the inner disk must heat the outer disk. This heating process launches a wind, so that each new pulse drives more wind from the disk. The rate of mass expelled in this wind is remarkably high, as much as 25 times the maximum rate at which matter falls onto the black hole.

“All that energy blows away an enormous amount of matter, equivalent to one third the mass of the Moon per day! This effectively forces the black hole onto a severe diet, and we think it eventually has real consequences for the system’s heartbeat,” said co-author Julia Lee, associate professor in the Astronomy department at Harvard and Neilsen’s thesis advisor.

This massive wind drains material from the outer disk and after a couple weeks, this depletion affects the inner disk, causing the black hole to feed much more slowly and its X-ray brightness to decrease substantially. Unable to power such strong variations in the disk and the wind, GRS 1915’s ‘heart’ ceases to beat. This remarkable system then likely begins one of its 13 other known patterns of variation.

Neilsen is a winner of the Roger Doxsey Travel Prize, which provides graduate students within one year of receiving or receipt of their PhD a monetary prize to enable the oral presentation of their dissertation research at an AAS meeting.