Take an umbrella if you plan to visit Titan!

“Persistent drizzle moving in from the coast clearing late morning” – a phrase frequently used in weather forecasts across the world can now be applied to the weather on Saturn’s largest moon, Titan, according to a paper published in Science (11th October 2007).

The near infrared observations made by astronomers from the University of California, Berkeley using the European Southern Observatory’s (ESO) Very Large Telescope (VLT) in Chile and the K.M. Keck Observatory in Hawaii show for the first time the presence of a high altitude near global cloud that causes a widespread and persistent morning drizzle of methane over the western foothills of the main continent on Titan named Xanadu.

According to team member Imke de Pater, “Titan’s topography could be causing this drizzle. The rain could be caused by processes similar to those on Earth: moisture laden clouds pushed upslope by winds condense to form a coastal rain.” The paper’s lead author Mate Adamkovics noted that only areas near Xanadu exhibited morning drizzle, and not always in the same spot. Depending on conditions, the drizzle could hit the ground or turn into a ground mist. The drizzle or mist seems to dissipate after about 10:30 a.m. local time, which, because Titan takes 16 Earth days to rotate once, is about three Earth days after sunrise. “Maybe only Xanadu has misty mornings,” he said.

Titan, whose thick atmosphere is comprised mainly of nitrogen, resembles the early atmosphere of Earth. Previous observations have shown that the entire moon is swathed in a hydrocarbon haze extending as high as 500 kilometres, becoming thinner with height.

Due to the extremely cold surface temperatures on Titan (minus 183 degrees Celsius), trace chemicals such as methane and ethane exist as solids and liquids on Titan. Surface features near the poles are thought to be lakes of liquid hydrocarbon, analogous to oceans on Earth, presumably filled by methane precipitation. This new result is the first observation of rain falling onto the surface.

Observations by NASA’s Cassini spacecraft, currently orbiting Saturn and its moons, have shown isolated ethane clouds at the north pole. Furthermore the European Space Agency’s (ESA) Huygens probe, released by Cassini in 2005, collected data on the methane relative humidity as it descended through Titan’s atmosphere providing evidence for the presence of frozen methane clouds and liquid methane clouds with possible drizzle at various heights.

These latest results are consistent with the findings of Huygens which provided a snapshot of the conditions on Titan. They clearly show a widespread cloud cover of frozen methane at a height of 25-35 kilometres. Commenting on these findings, lead scientist for the Surface Science Package on Huygens which detected the likely existence of clouds at these altitudes, Professor John Zarnecki from The Open University said, “These results reinforce some of the similarities between conditions on Titan and Earth – cirrus clouds, drizzle, lakes – all are indicative of a cycle at work -albeit with methane on Titan. By pooling data gathered from space and ground based observations we can piece together a global picture of this distant world.”

One difference between the drizzle on Titan and Earth is the size of the droplets. On Titan the methane droplets are predicted to be at least millimetre sized, a thousand times larger than in terrestrial clouds. With about the same moisture content as the Earth’s clouds the droplets on Titan are more spread out and less dense making them harder to detect. 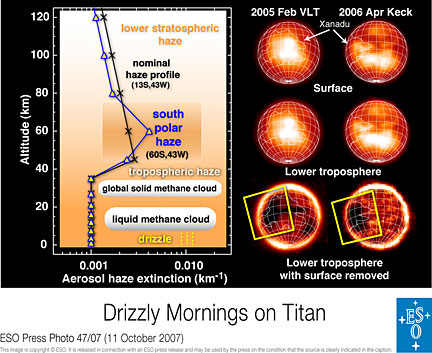 Links will be available from the ESO website. http://www.eso.org/public/outreach/press-rel/pr-2007/pr-47-07.html

The scientists report their observation in the 11 October issue of Science Express, an online version of the journal Science: “Widespread Morning Drizzle on Titan”, by Mate Adamkovics, Michael H. Wong, Conor Laver, and Imke de Pater.

If all the moisture were squeezed out of Titan’s clouds, it would amount to about one and a half centimetres of liquid methane spread around Titan’s surface. This is about the same moisture content as some of Earth’s clouds.

Since 1996, de Pater and colleagues have been using infrared detectors on the Keck telescopes to monitor regularly clouds and hazes on Titan. In past years, they have also used the VLT. The advantage of observing at infrared wavelengths is that Titan’s haze is relatively transparent. At optical wavelengths, these haze layers form an impenetrable layer of photochemical smog.

By observing at different infrared wavelengths, scientists can probe different altitudes in Titan’s atmosphere, depending on the strength of the methane absorption at that wavelength. Then, by using the methane absorption profile, they can pinpoint particular altitudes in Titan’s atmosphere, allowing astronomers to see the surface and judge the altitude of methane clouds.