These first test flights were done with the purpose of testing and validating avionics systems, drone systems, Guidance-Navigation-Control instruments and various sensors.

All system components were inserted into an avionics system container suspended by a local custom-manufactured flight support and release jig structure. The flight support and release jig structure was custom-manufactured by North Bay Machining Centre Inc. and assembled at the Canadore College Aviation Campus by Canadore College faculty in collaboration with the S3 design team. The first phase of a drop-test flight campaign in North Bay included contributions from seven local companies, with all work completed and delivered on-time and on-budget. 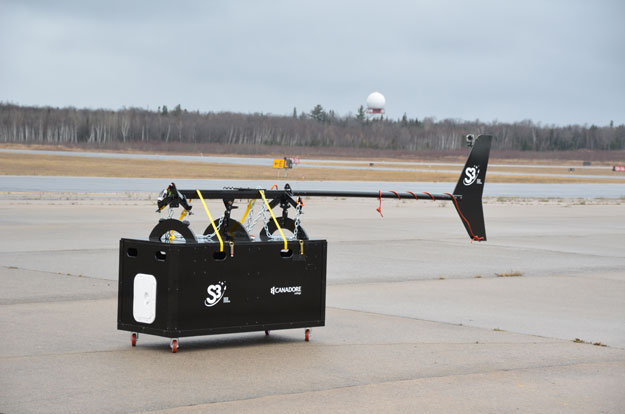 The flight support and release jig construction was carried by a helicopter at a maximum altitude of 3,800 m /12,500 ft. to test system control and telemetry in-flight, which was connected and monitored in real-time with the ground station. It was also an opportunity for a delegation of S3 engineers to strengthen their collaboration with the supporting teams of Canadore College, North Bay Jack Garland Airport (YYB), and the City of North Bay, in preparation for the future drop-test flight campaign of a fully functional, but reduced-scale SOAR suborbital shuttle mock-up, scheduled to take place in the spring of 2015 from the same location.

During the week-long flight test campaign, various helicopter flight profiles were successfully performed in order to evaluate the flight systems, which will ultimately be integrated into a reduced scale mock-up of the SOAR suborbital shuttle. The fully-equipped mock-up and flight-tested jig system will be used in the spring of 2015 for captive flights from a helicopter. These tests will be helicopter-carried and eventually drop from an altitude of nearly 5,000 m / 16,500 ft. in order to allow its autonomous flight approach and landing with monitoring and eventual control from the ground, if needed. The results of the preparatory SOAR shuttle drop-test flights conducted this week in Canada are very encouraging, according to Robert Feierbach, Head of S3 Americas. 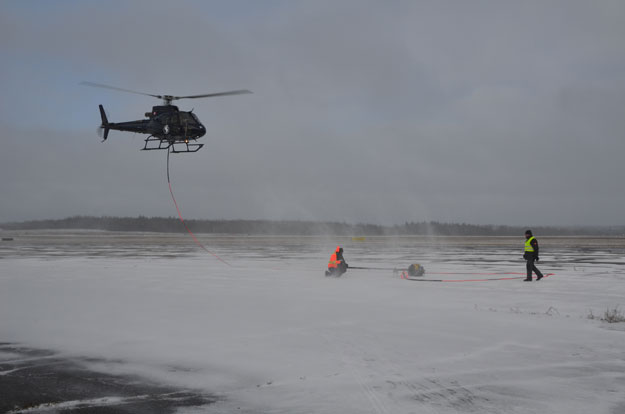 “As a team, we had the opportunity to successfully test our telecommunication and guidance systems, and to collaborate closely with the Canadore College and North Bay Jack Garland Airport (YYB) teams. This bodes well prior to the forthcoming drop-test flights aimed to take place next spring,” said Feierbach.

The first phase of test flights completed last week presented a good opportunity for Canadore College’s Aviation Campus experts and North Bay Jack Garland Airport (YYB) staff to meet the various S3 engineers and operational staff – with whom they had been working remotely over the past few months – to perform a full-scale rehearsal before the forthcoming spring flight tests.

“This is a promising spaceflight-related collaboration starting on a solid base, and we already look forward to contributing to the success of the second phase of this drop-test flight campaign, and to S3’s SOAR project in general,” said George Burton, Canadore College’s President and CEO. “These operational activities will enable Canadore to strengthen our technical and logistical expertise in flight test operations with an international scope, as this one demands.”

North Bay Mayor Al McDonald says that the city is looking forward to hosting S3 again in the spring after such a successful trial.

“More than just Canadore College, the whole region of North Bay benefits from this collaboration with S3, which is long-term focused and will help us in our positioning as a future player in the rapidly growing commercial space sector,” said McDonald. “The second phase of the SOAR drop-test campaign holds a lot of excitement, and we appreciate the continued great work and joint collaboration. We are proud to be able to showcase the opportunities North Bay has to offer to the Canadian and international space industry.”