Swift is a NASA-led mission dedicated to the gamma-ray burst mystery.
These random and fleeting explosions likely signal the birth of black
holes. With the UVOT turned on, Swift now is fully operational.
Swift’s two other instruments — the Burst Alert Telescope (BAT) and
the X-ray Telescope (XRT) — were turned on over the past several
weeks and have been snapping up gamma-ray bursts ever since. 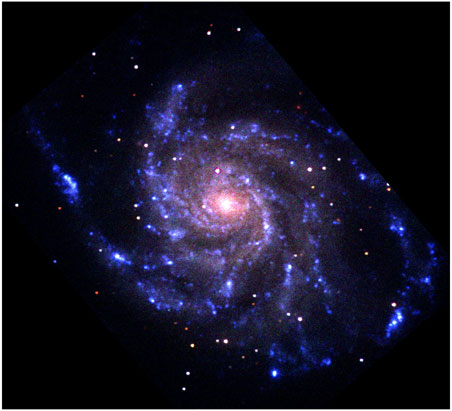 “After many years of effort building the UVOT, it was exciting to
point it toward the famous Pinwheel Galaxy, M101,” said Peter Roming,
UVOT Lead Scientist at Penn State. “The ultraviolet wavelengths in
particular reveal regions of star formation in the galaxy’s wispy
spiral arms. But more than a pretty image, this first-light
observation is a test of the UVOT’s capabilities.”

Swift’s three telescopes work in unison. The BAT detects gamma-ray
bursts and autonomously turns the satellite in seconds to bring the
burst within view of the XRT and the UVOT, which provide detailed
follow-up observations of the burst afterglow. Although the burst
itself is gone within seconds, scientists can study the afterglow for
clues about the origin and nature of the burst, much like detectives
at a crime scene.

The UVOT serves several important functions. First, it will pinpoint
the gamma-ray burst location a few minutes after the BAT detection.
The XRT provides a burst position within a 1- to-2-arcsecond range.
The UVOT will provide sub-arcsecond precision, a spot on the sky far
smaller than the eye of a needle at arm’s length. This information
is then relayed to scientists at observatories around the world so
that they can view the afterglow with other telescopes.

As the name applies, the UVOT captures the optical and ultraviolet
component of the fading burst afterglow. “The ‘big gun’ optical
observatories such as Hubble, Keck, and VLT have provided useful data
over the years, but only for the later portion of the afterglow,”
said Keith Mason, the U.K. UVOT Lead at University College London’s
Mullard Space Science Laboratory. “The UVOT isn’t as powerful as
these observatories, but has the advantage of observing from the very
dark skies of space. Moreover, it will start observing the burst
afterglow within minutes, as opposed to the day-long or week-long lag
times inherent with heavily used observatories. The bulk of the
afterglow fades within hours.”

The ultraviolet portion will be particularly revealing, said Roming.
“We know nearly nothing about the ultraviolet part of a gamma-ray
burst afterglow,” he said. “This is because the atmosphere blocks
most ultraviolet rays from reaching telescopes on Earth, and there
have been few ultraviolet telescopes in orbit. We simply haven’t
yet reached a burst fast enough with a UV telescope.”

The UVOT also will help scientists determine the distance to the
closer gamma-ray bursts, within a redshift of 4, which corresponds to
a distance of about 11 billion light years. The XRT will determine
distances to more distant bursts.

Scientists hope to use the UVOT and XRT to observe the afterglow of
short bursts, less than two seconds long. Such afterglows have not
yet been seen; it is not clear if they fade fast or simply don’t
exist. Some scientists think there are at least two kinds of
gamma-ray bursts: longer ones (more than two seconds) that generate
afterglows and that seem to be caused by massive star explosions, and
shorter ones that may be caused by mergers of black holes or neutron
stars. The UVOT and XRT will help to rule out various theories and
scenarios.

The UVOT is a 30-centimeter telescope with intensified CCD detectors
and is similar to an instrument on the European Space Agency’s
XMM-Newton mission. The UVOT is as sensitive as a four-meter optical
ground-based telescope. The UVOT’s day-to-day observations,
however, will look nothing like M101. Distant and faint gamma-ray
burst afterglows will appear as tiny smudges of light even to the
powerful UVOT. The UVOT is a joint product of Penn State and the
Mullard Space Science Laboratory.

Swift is a medium-class explorer mission managed by NASA Goddard.
Swift is a NASA mission with participation of the Italian Space
Agency and the Particle Physics and Astronomy Research Council in the
United Kingdom. It was built in collaboration with national
laboratories, universities and international partners, including Penn
State University in Pennsylvania, U.S.A.; Los Alamos National
Laboratory in New Mexico, U.S.A.; Sonoma State University in
California, U.S.A.; the University of Leicester in Leicester,
England; the Mullard Space Science Laboratory in Dorking, England;
the Brera Observatory of the University of Milan in Italy; and the
ASI Science Data Center in Rome, Italy.

Three high-resolution images for use by reporters to illustrate this
story are available on the web at
http://www.science.psu.edu/alert/UVOTfirstlight.htm
and at
http://swift.gsfc.nasa.gov.