Swarm of microprobes to head for Jupiter

By SpaceRef Editor
January 26, 2015
Filed under Jupiter, US 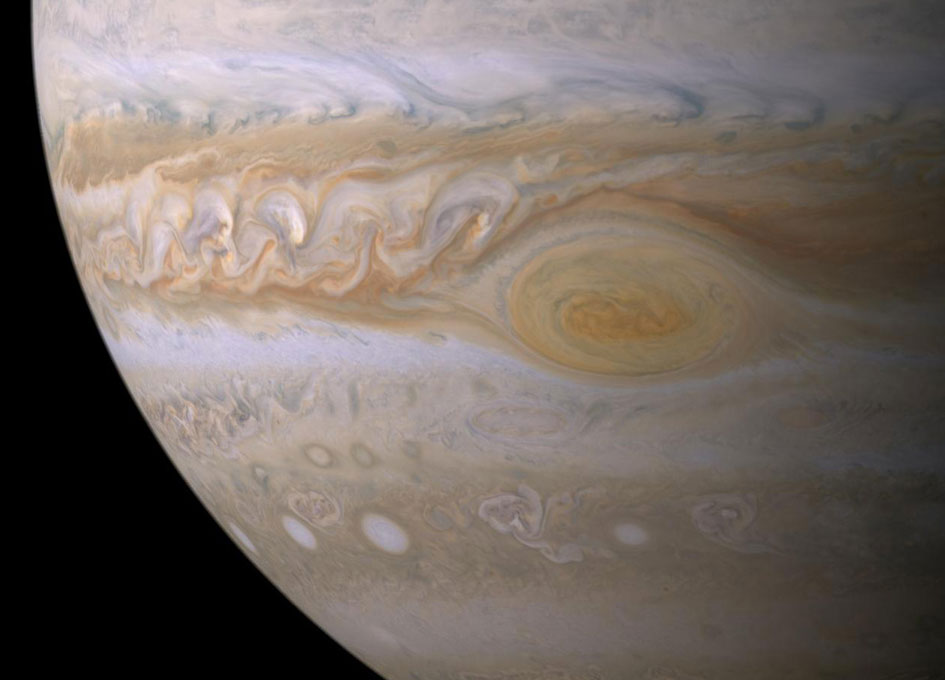 A swarm of tiny probes each with a different sensor could be fired into the clouds of Jupiter and grab data as they fall before burning up in the gas giant planet’s atmosphere. The probes would last an estimated 15 minutes according to planetary scientists writing in the International Journal Space Science and Engineering. Transmitting 20 megabits of data over fifteen minutes would be sufficient to allows scientists to get a picture of a large part of the atmosphere of the planet.

Orbiting and flyby probes have provided astronomers with a lot of information about the “surface” of the outer planets and the moons that orbit those planets. However, probing deep within their atmospheres requires penetrating the dense clouds to obtain meaningful data. Spacecraft weighing more than 300 kilograms fall too slowly, which has the net effect of reducing how much data they transmit because the relay needs to be further away.

Much smaller probes, made possible by the miniaturization of electronics, cameras and other instruments, would survive the fall through Jupiter’s atmosphere for much longer without a parachute, according to John Moores of the Centre for Research in the Earth and Space Sciences (CRESS), at York University, Toronto, and colleagues there and at the University of Toronto. “Our concept shows that for a small enough probe, you can strip off the parachute and still get enough time in the atmosphere to take meaningful data while keeping the relay close and the data rate high,” Moores explains.

Tiny satellites that weigh less than one kilogram, known as micro, nano and cube satellites, are already used in Earth orbit for a wide range of applications. There are limitations to how much solar power such small satellites can gather and regulations preclude the use of plutonium-powered thermoelectric generators. Micro satellites also require substantial infrastructure to gather their data signals. The team suggests that the presence of the European Space Agency (ESA) JUICE orbiter in the Jovian system set to begin in 2030 might facilitate a tandem mission that carried micro satellites to the planet. The mission platform has been named SMARA for SMAll Reconnaissance of Atmospheres and gets its name from the wind-borne fruit of the maple tree, the samara.

The SMARA mission may help address various aspects of planetary science. For instance, given that more than two-thirds of the total mass of the solar system, not including the Sun, forms Jupiter, its study is important for understanding the nature of the solar nebula from which our sun and all its planets formed. Additionally, Jupiter is under constant bombardment from small bodies, such as asteroids, and again, understanding its atmosphere would shed new light on the nature of these. The planet’s atmosphere may even represent a historical record of impacts again providing information about the composition of the solar system.

Additionally, Jupiter’s is the deepest of all the planetary atmospheres in the solar system and so offers an exciting laboratory for understanding flow dynamics, cloud microphysics and radiative transfer under conditions that are very different from those we see on Earth and the other terrestrial planets.

Also, Jupiter is the closest of the gas giants but there are now known to be many more similar planets orbiting other stars. Studying our nearest gas giant neighbor in close-up detail might allow us to understand the gas giants of distant stars with greater clarity. NASA’s robotic Galileo probe, which orbited Jupiter in 1995, had no camera, so the swarm of microprobes would represent a first look at Jupiter with resolution greater than 15 kilometers per pixel.