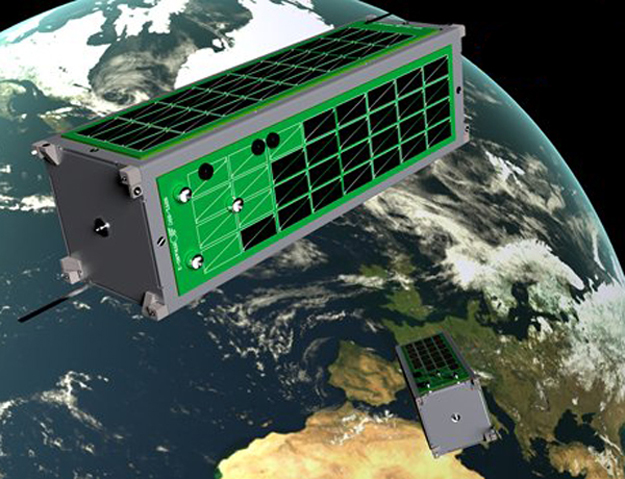 Space innovators at the University of Surrey and Surrey Satellite Technology Limited (SSTL) are developing ‘STRaND-2’, a twin-satellite mission to test a novel in-orbit docking system based upon XBOX Kinect technology that could change the way space assets are built, maintained and decommissioned.

STRaND-2 is the latest mission in the cutting edge STRaND (Surrey Training, Research and Nanosatellite Demonstrator) programme, following on from the smartphone-powered STRaND-1 satellite that is near completion. Similar in design to STRaND-1, the identical twin satellites will each measure 30cm (3 unit Cubesat) in length, and utilise components from the XBOX Kinect games controller to scan the local area and provide the satellites with spatial awareness on all three axes.

Docking systems have never been employed on such small and low cost missions and are usually reserved for big-budget space missions to the International Space Station (ISS), or historically, the Mir space station and the Apollo program. The STRaND team sees the relatively low cost nanosatellites as intelligent “space building blocks” that could be stacked together and reconfigured to build larger modular spacecraft.

SSTL Project Lead Shaun Kenyon explained: “We were really impressed by what MIT had done flying an autonomous model helicopter that used Kinect and asked ourselves: Why has no-one used this in space? Once you can launch low cost nanosatellites that dock together, the possibilities are endless – like space building blocks.”

The STRaND-2 twins will be separated after launch. After the initial phase of system checks, the two satellites will be commanded to perform the docking procedure and, when in close proximity, the Kinect-based docking system will provide the satellites with 3D spatial awareness to align and dock.

Dr Chris Bridges, SSC Project Lead, explains: “It may seem far-fetched, but our low cost nanosatellites could dock to build large and sophisticated modular structures such as space telescopes. Unlike today’s big space missions, these could be reconfigured as mission objectives change, and upgraded in-orbit with the latest available technologies.”

Based in Guildford, UK, SSTL is owned by Astrium, an EADS company.

The Surrey Space Centre (SSC), a Research Centre of the Faculty of Electronics and Physical Sciences (FEPS) at the University of Surrey, is a world leading Centre of Excellence in Space Engineering, whose aim is to underpin the technical development of the space industry through its advanced research programmes. SSC, comprising over 90 researchers and, faculty develops new innovative technologies which are exploited by the space industry.

Surrey’s pioneering small satellite activities started in 1979 as an academic activity at the University, leading in 1985 to the formation of a highly successful spin-out company – Surrey Satellite Technology Ltd. (SSTL).